Not "Bourne" On The Fourth Of July 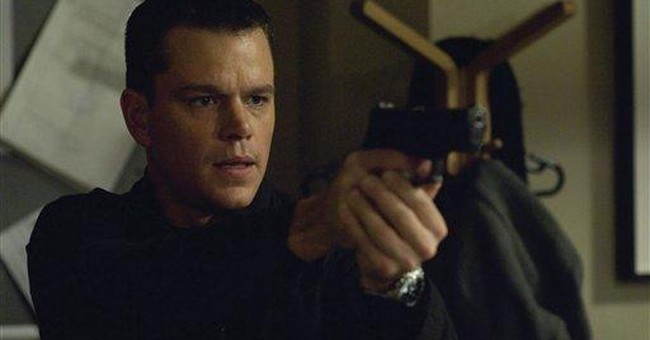 "[C]onscience," agonizes Hamlet in Act III, Scene I, "does make cowards of us all; / And thus the native hue of resolution / Is sicklied o'er with the pale cast of thought, / And enterprises of great pith and moment / With this regard their currents turn awry, / And lose the name of action."

The tragedy of Hamlet is the tragedy of overweening self-criticism. "If Hamlet is sick," writes theater critic Walter Kerr in his masterpiece, "Tragedy and Comedy," "he is sick with a passion for perfection." Hamlet waits for the perfect moment to kill Claudius, says Kerr, and so misses his opportunity. He wants all women perfect, and so abandons Ophelia to her fate. He wants all friends as trustworthy as Horatio, and so leaves himself vulnerable to Claudius and Laertes, losing his life and his throne.

Self-criticism is valuable and necessary. Without it, we could not correct the mistakes of the past. But reflexive and exclusive self-criticism -- obsession with purity of heart and purity of act at the expense of right action -- is dangerous. While we purify ourselves, our enemies plot against us. Mortal offense cannot be met with self-reflection.

The American left refuses to acknowledge this basic truth. So does its propaganda arm in Hollywood.

Since the Vietnam War, Hollywood has unleashed a torrent of films targeting the American government. Hollywood believes, to quote cartoonist Walt Kelly, that we have met the enemy and he is us. That sentiment has gained renewed momentum since the advent of the war in Iraq.

The latest incarnation of this view is "The Bourne Ultimatum," featuring Matt Damon in the title role. The movie is tremendously entertaining -- the action sequences are some of the best ever filmed -- but the message is familiar: The CIA is corrupt and evil. CIA higher-ups, played by character actors like Scott Glenn and David Strathairn, pontificate about the need for more authority while blithely ordering the murder of the rogue hero. Bourne, meanwhile, tries to contact the good apple in the bad barrel, Pamela Landy (Joan Allen), in order to discover his own background. In order for Bourne to succeed, he will have to take down much of the bankrupt CIA infrastructure.

It's great popcorn entertainment, but bad politics. It's also part of a broader pattern of recent anti-American claptrap. 2007 brought us "Shooter," directed by 9/11 conspiracy theorist Antoine Fuqua, an inane Mark Wahlberg vehicle in which a Dick Cheney caricature (Ned Beatty) -- the character is a tubby, balding six-term senator from Montana who fancies hunting, remarks casually that democracy is problematic, and laughs maniacally that the war in Iraq is about oil -- organizes the slaughter of an African village and the assassination of an Ethiopian archbishop in order to secure the building of an oil pipeline. The film's dialogue is atrocious -- one of the villains, played by Danny Glover, growls at one point that he can't be found guilty for his actions because "this is the land of the free and the home of the brave."

"Shooter" received plaudits for its politics from the movie reviewers. Richard Corliss of Time magazine lamented that there wasn't a real hero to face down the "monstrously real problems" and "plausible" conspiracy theories addressed by "Shooter." Manohla Dargis of The New York Times saw the film, remarkably enough, as a combination of "live-free-or-die vibe [and] deep-fried gun-and-flag fetishism."

"Shooter" and "Bourne" are just the beginning. Later this year, Hollywood will release "Lions for Lambs" (Tom Cruise, Robert Redford and Meryl Streep), in all likelihood an anti-war on terror screed; "Grace is Gone" (John Cusack), an anti-war flick about the husband of an American soldier killed in the war on terror; "Rendition" (Reese Witherspoon, Jake Gyllenhaal), another "the CIA is so evil, they're torturing my husband" piece; and "The Torturer," sloganned "In a post-9/11 world, no one can hear you scream."

America should scrutinize her own policies. There is a difference, however, between self-scrutiny and self-flagellation designed to cripple the will to action. Hollywood recognizes no such distinction.

For Hollywood, self-criticism is heroism. Hamlet is a hero while he vacillates, a villain once he acts. The only heroes worth their salt, according to Hollywood, are those who resist the government's war on terror; those who fight terror simply aren't self-reflective enough.

There's only one problem: When it comes to destroying America, the self-reflective anti-heroes of Hollywood and Islamic terrorists join hands. Terrorists will take allies wherever they can find them. And Hollywood is certainly a convenient ally.

Joe Biden Said Some More Awkward Remarks About Indian-Americans
Townhall
'Build back better! LOL!' Comfortably Smug just needs 1 painfully true tweet to obliterate Biden's economy and it's perfect
Twitchy
If You Want to Understand Why 5,000 National Guardsmen Are Still in DC, Read the Indictment of Oath Keepers Involved in the Capitol Riot
Redstate
The Relentless 9-Year Assault on Jack Phillips Unmasks the True Threat of the 'Equality Act'
PJ Media