Dreaming Of A World Without God 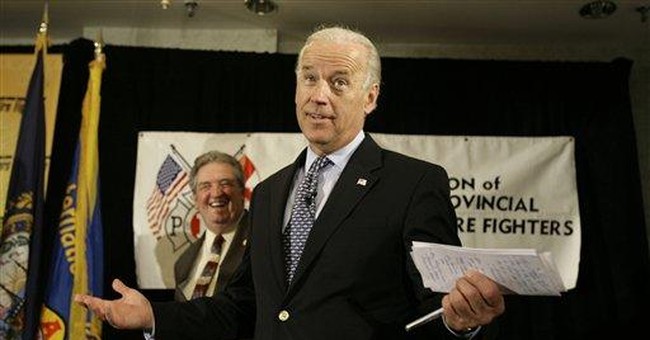 There is a curious void in the modern American left. That void is the empty spot where God should be. The American left -- and the Democratic Party, as its political representative -- has worked tirelessly over the course of decades to cast God from the public square, all the time disclaiming their mission by invoking "tolerance" for all beliefs.

But now the cat is out of the bag. In the aftermath of John Kerry's electoral defeat in 2004, Democrats explained that they wished to re-enter the arena of moral values. During the two Democratic presidential debates, God was mentioned just once, by scurrilous panderer John Edwards; ethics was mentioned once, by Barack Obama, who was disclaiming his association with a lobbyist; morality was mentioned only in the context of America's international "immorality"; values were invoked only by Joe Biden (ironically enough, in touting Roe v. Wade ). When Democrats talk about moral values, they mean the Planned Parenthood brochure.

Where's God in the liberal moral equation? Nowhere to be found -- and with good reason. The American left now stands for the wholesale displacement of traditional religious morality and the utter rejection of the Divine. "We believe with certainty that an ethical life can be lived without religion," atheistic commentator Christopher Hitchens writes in his new best seller, "God Is Not Great." Hitchens, consciously or unconsciously, speaks for the liberal movement.

Liberalism's morality is philosophically bankrupt. Its atheism precludes the human capability for free will -- without a soul, we are nothing but mechanistic products of genetics and environment -- yet it simultaneously insists on an infinite capability for individual and societal perfection. It asserts the potentiality for a triumph of the will, while obliterating the basis for willpower. It champions the "natural," while maintaining that nature need not dictate social relations. It weds deterministic Darwinism to Marxist utopianism.

Despite liberal ethics' internal contradictions, they have largely triumphed in America over the past 40 years. The same Gallup poll showed that Americans now believe in the moral acceptability of premarital sex (59 percent to 38 percent), illegitimacy (54 to 42) and doctor-assisted suicide (49 to 44). Large minorities believe in the moral acceptability of homosexuality (47 percent) and abortion (40 percent).

A morality promoting licentiousness is a powerful temptation. As a societal morality, however, it is doomed to failure. The consequences of legitimating illegitimacy and abortion have been dire -- the plague of fatherlessness combined with the vast killing of the unborn is crippling America economically and demographically. Excusing homosexuality and premarital sex has bred cynicism, jadedness, illness and broken homes.

Forty-three years ago, Ronald Reagan explained that the time had arrived for choosing. "You and I are told increasingly we have to choose between a left or right," Reagan explained. "Well, I'd like to suggest there is no such thing as a left or right. There's only an up or down -- up to a man's age-old dream, the ultimate in individual freedom consistent with law and order, or down to the ant heap of totalitarianism."

We have witnessed four decades of a punctuated slide down to the ant heap, thanks to the morality of those who reject the possibility of the soul and the righteousness of the Divine moral mission. But it is not too late. It is never too late, as long as the Divine spark smolders in the human heart -- the spark that is always ready to burst into a renewed flame of enlightened morality. And no amount of liberal obfuscation and atheistic bluster can extinguish that spark.