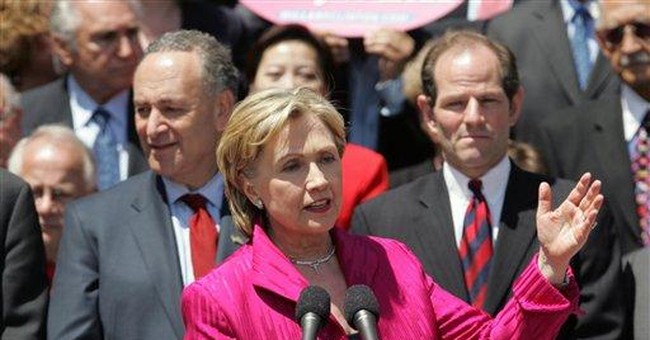 The Democratic Party, we are led to believe, is the party of live-and-let-live, you-do-your-thing-I'll-do-mine, let-a-thousand-flowers-bloom morality. Part and parcel of the Democratic commitment to tolerance, we are told, is their commitment to religious and political diversity.

At the beginning of the Muslim holy month of Ramadan 2005, Rep. Nancy Pelosi explained, "We must continue to work to promote religious tolerance; our diversity as a nation is one of our greatest strengths." In April 2005, Sen. Hillary Clinton stated, "Religious liberty is one of the most important issues on the world's agenda today." Today, Barack Obama warns that Democrats must not "equate tolerance with secularism and forfeit the moral language that would help infuse our policies with a larger meaning."

Similarly, throughout the war on Islamofascism, Democrats have declared that political dissent is sacrosanct -- that political dissent, in fact, is the highest form of patriotism. "Patriotism is about refusing to support something you know is wrong and having the courage to speak out with strength and passion and backbone for something you know is right," Sen. John Edwards recently stated. Sen. Hillary Clinton shrieked in April 2003: "I am sick and tired of people who say that if you debate and you disagree with this administration you're not patriotic. We should stand up and say, 'We are Americans and we have a right to debate and disagree with any administration!'"

The proof is in the pudding: The House Democrats are currently pursuing policies that would criminalize religious thought and crack down on political speech. On May 3, House Democrats voted to create extra penalties and additional investigatory funding for crimes committed against gays, lesbians, bisexuals, transsexuals, transvestites and others with statistically deviant "sexual orientations" or "gender identities."

This bill is aimed at quashing traditional religious thought. No one advocates violent attacks in any case -- all this "hate crimes" bill does is stigmatize anti-homosexuality religious principle. All "hate crimes" are thought crimes, designed to more harshly punish offenders for their racism, sexism or religious bigotry. By lumping in "sexual orientation" and "gender identity" with categories like race and religion, House Democrats seek to legally enshrine homosexuality as morally legitimate.

It will not be long before Democrats apply the same principle -- homosexuality as protected status -- to federal housing and employment law. The day is close at hand when church organizations are forced to hire homosexuals, when parochial schools are punished for firing Mary-formerly-known-as-Bob.

But Democrats aren't only focusing on silencing traditional religion. They're focusing on shutting down conservative thought more generally. Naturally, the Democrats are targeting Rush Limbaugh and Salem Radio Network in particular. To that end, Senate Majority Leader Harry Reid and Speaker Pelosi are eager to reinstate the misnamed Fairness Doctrine, which would effectively shut down talk radio.

The defunct Fairness Doctrine required radio stations to warn political figures before they were attacked, and then give the political figures airtime to respond. It also forced stations to give equal time to proponents and opponents of given issues and candidates. Reinstating the Fairness Doctrine would essentially turn talk radio into PBS, restoring a virtual monopoly to the major liberal media.

The Democrats do not stand for "live and let live." If you want to make a liberal utopian omelette, they say, you have to break some religious and constitutional eggs. And if you have to lie to the American people to do it, so be it.

NYT: Roe v. Wade Got Shredded Because Dems Dropped the Ball in These Key Races
Matt Vespa
4 Lies About the Dobbs Ruling, Debunked