It's Giuliani's Nomination To Lose 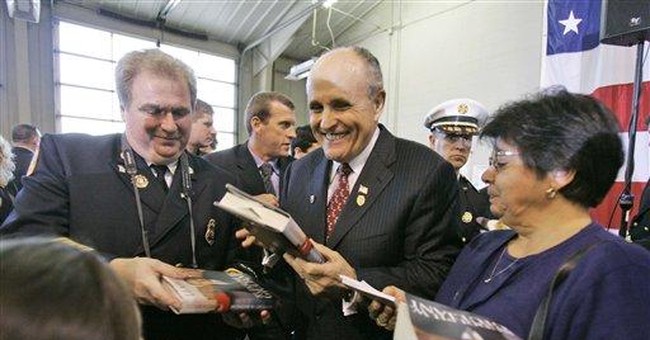 The race is on for the Republican presidential nomination. And for the first time since 1964, the field is wide open. Now, 1964 was not a good year electorally for Republicans: Republican nominee Senator Barry Goldwater of Arizona won only 38 percent of the popular vote, Republicans dropped 36 seats in the House, giving Democrats a 155 seat majority, and Democrats picked up seats in the Senate, gaining full two-thirds control. An open primary season may translate into electoral disaster.

Republicans in 2007 may not remember 1964, but they remember their congressional losses in 2006. And they do not like losing. Which is why none of the solidly conservative candidates seem to be gaining any traction in the long run-up to the primaries. Senator Sam Brownback, R-Kansas, Governor Mike Huckabee, R-Arkansas, Rep. Tom Tancredo, R-Colorado, and Rep. Duncan Hunter, R-California, are all solid conservatives, yet none of them show up in Republican opinion polls.

They don't show up because they don't have the name recognition it takes to win a general election. The only social conservative in the field with significant national name recognition is former House Speaker Newt Gingrich, R-Georgia, who has not declared his intent to run. Gingrich is reprising the Richard Nixon 1968 nomination strategy -- wait it out, let the conservative base rally around you, secure the nomination by acclaim.

There is only one problem for Gingrich: This is not 1968. It is 1952. This time around, former New York Mayor Rudy Giuliani plays the role of Dwight D. Eisenhower.

But this is no normal time, and Giuliani is no Rockefeller. Yes, he's socially liberal. Yes, he's anti-gun. But unlike Rockefeller -- and like Eisenhower -- Giuliani has cachet. He has an earned reputation for leadership. His conduct on 9/11 unified a city and a country. He talks tough on terror, and he has the credibility of experience.

Eisenhower was no hard-line Republican. Barry Goldwater rightly described him as "a dime store New Dealer." Both Democrats and Republicans recruited him in the run-up to the 1952 election. But when it came to the general election, Eisenhower dominated.

But Giuliani could change all that. The South will remain solidly Republican simply out of necessity -- the Democratic Party has moved too far left to threaten Giuliani's right flank. The North, however, may see Giuliani's appeal. Giuliani, after all, was the mayor of the largest city in the United States. He is tough on crime, soft on traditional morality and solidly reductionist on taxes. It is no wonder that in every recent poll Giuliani defeats all comers in a general election.

What about a conservative insurrection against Giuliani? I recently spoke at the Conservative Political Action Conference (CPAC), perhaps the largest agglomeration of conservatives in the United States. By and large, the 6,000-plus attendees seemed lukewarm on the candidates -- many of the attendees sported stickers condemning "Rudy McRomney," a combination of Giuliani, Senator John McCain and former Massachusetts Governor and alleged flip-flopper Mitt Romney. But when it came time to vote in the CPAC straw poll, Romney came away with a slight victory, and Giuliani came in second. When first choice and second choice votes were combined, Giuliani came out on top.

Pennsylvania GOP Could Get a Huge Boost From an Impeachment Vote Before Midterms
Townhall
Tweeter risks wrath of some of America's most privileged lib journos in order to expose their efforts to hide their backgrounds from the public; UPDATED
Twitchy
SCOTUS Is Inclined to Approve Alabama’s ‘Race Neutral’ Maps as Justice Brown Jackson Applies the 1619 Project to the Fourteenth Amendment
Redstate
5 Years After Las Vegas Concert Shooting, an FBI Whistleblower Reveals Probable Motive
PJ Media