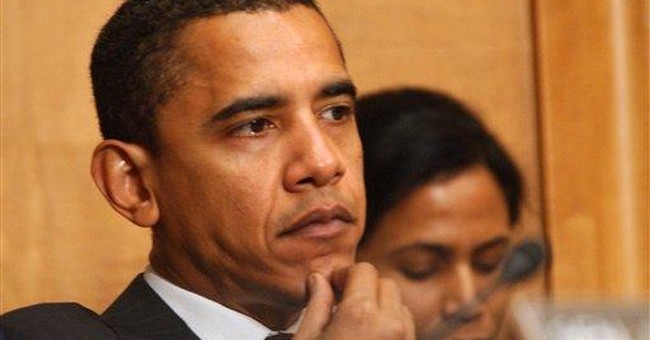 We live in a dangerous world. According to the European Union, that world will become exponentially more dangerous in the coming years. An internal EU document leaked to the Financial Times states that Iran will likely go nuclear in the near future. "Attempts to engage the Iranian administration in a negotiating process have so far not succeeded," says the document. "At some stage we must expect that Iran will acquire the capacity to enrich uranium on the scale required for a weapons programme." The document also suggests that economic sanctions will be useless.

What is to be done? The European Union, as usual, has decided to stick its collective head in the sand. No surprise there. If Iran is to be stopped, of course, it will not be the EU that takes the leadership role -- it will have to be the United States. "The price of greatness is responsibility," explained Winston Churchill. The price of global leadership is global leadership .

Unfortunately, we are currently mired in an existential crisis of our own. The war in Iraq has undermined the will to use military force, even when military force is necessary. Just because we did not find massive stockpiles of weapons of mass destruction in Iraq does not mean Iran is benign. Yet, like the Western powers after World War I, we prefer to watch as our enemies re-arm rather than stopping them when we can. The results, as they were in 1939, will be devastating.

All of which makes the presidential election of 2008 the most important election in recent memory. America teeters on the brink of a crippling European post-modernism.

The political embodiment of that post-modernism -- that nihilistic resignation -- is the modern Democratic Party. Senator Barack Obama of Illinois, the Democrats' bright new star, is no more capable of global leadership than Jacques Chirac. Obama's politics of "understanding" dictates that evil cannot be fought -- it must be placated with psychobabble.

In his new forward to "Dreams From My Father," Obama writes, "I know, I have seen, the desperation and disorder of the powerless: how it twists the lives of children on the streets of Jakarta or Nairobi how easily they slip into violence and despair. I know that the response of the powerful to this disorder -- alternating as it does between a dull complacency and, when the disorder spills out of its proscribed confines, a stead unthinking application of force, of more sophisticated military hardware -- is inadequate to the task." This sounds like boilerplate rhetoric. It is not. It is the theory of appeasement, stated clearly and succinctly.

Obama's adolescent insistence that everything can be talked out is matched in its idiocy only by his adolescent scorn for military sacrifice in general. In a speech in Iowa on February 11, Obama stated, "We ended up launching a war that should have never been authorized and should have never been waged -- and to which we have now spent $400 billion and have seen over 3,000 lives of the bravest young Americans wasted." Wasted. This is the language of MoveOn.org, the language of Democratic Underground, the language of the 1960s radicals Obama claims to deplore.

This was no isolated incident. It reflects what Obama believes. After Obama sponsored legislation mandating a full troop withdrawal from Iraq by March 2008, Australian Prime Minister John Howard lashed out. Al Qaeda, Howard said, would be "praying as many times as possible" for Obama's election in 2008. Obama's response was breathtakingly ignorant and immature: If Howard is "ginned up to fight the good fight in Iraq," spat Obama, "I would suggest that he call up another 20,000 Australians and send them to Iraq. Otherwise, it's just a bunch of empty rhetoric."

There are currently over 1,400 Australian troops dispatched to Iraq. Howard has a legitimate reason to declaim Obama's politics: His country has hundreds of troops on the ground, and American policy affects those troops. For Obama to dismiss Howard's opinion by insulting Australia's sacrifice is outrageous.

And yet it is Barack Obama -- a man who sees aloe vera as an actual foreign relations strategy, who routinely derides military sacrifice -- whom the Democrats put forth as their hot new candidate for the 2008 presidential nomination.

Will America join Europe, sticking its head in the sand, enabling Islamism by ignoring it? Iran certainly hopes so. Like Al Qaeda, Iran's leaders must be praying every day that Americans turn to a candidate like Barack Obama.