Is Barack Obama The Messiah? 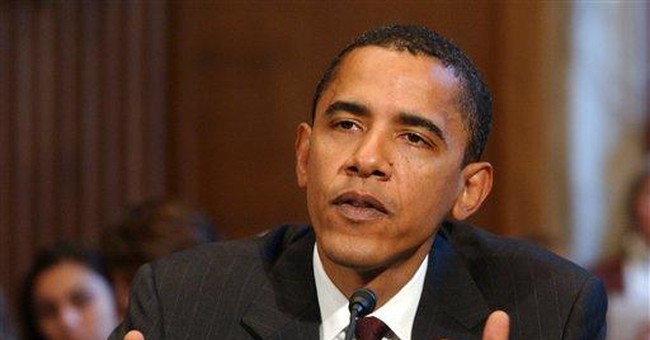 Apparently, Senator Barack Hussein Obama, D-Illinois, is the Messiah. The New York Times reported on Sunday that in Obama's time at Harvard Law School, he "developed a leadership style based more on furthering consensus than on imposing his own ideas. Surrounded by students who enjoyed the sound of their own voices, Mr. Obama cast himself as an eager listener, sometimes giving warring classmates the impression that he agreed with all of them at once."

Also on Sunday, the Boston Globe reported, "These days, Obama is the hot new candidate for the White House, trying to end the warring in Washington with a warm message of unity and optimism. But years before taking that message to the national political stage, he was defusing battles large and small from the sharp-elbowed basketball games to the cutthroat classrooms at Harvard Law School." And on the same day, the Los Angeles Times similarly reported, "At Harvard Law Review he showed that -- on a much smaller scale -- he had the savvy to maneuver through turbulent political waters."

Jesus didn't get this kind of Sunday media coverage on Easter Sunday. It is no wonder Slate.com has a running Obama "Messiah Watch" dedicated to "considering evidence that Obama is the Son of God."

What has Obama done to earn such praise? He has no record. But he does have rhetoric -- the kind of rhetoric that makes people all warm and fuzzy inside.

In his much-heralded presidential exploratory committee announcement, Obama noted "how hungry we all are for a different kind of politics." And Obama says he is the man to take us beyond "the psychodrama of the baby boom generation -- a tale rooted in old grudges and revenge plots hatched on a handful of college campuses long ago -- played out on the national stage. The victories that the Sixties generation brought about -- the admission of minorities and women into full citizenship, the strengthening of individual liberties, and the healthy willingness to question authority -- have made America a far better place for all its citizens. But what has been lost in the process, and has yet to be replaced, are those shared assumptions -- that quality of trust and fellow feeling -- that bring us together as Americans."

The 1960s brought about some good, as Obama mentions -- most prominently, racial tolerance. And as a country, we have accepted the gains of the 1960s. We have continued to battle, however, over the idea that racial tolerance must come as part of a philosophical package that has more in common with the ideals of the French Revolution than the American Revolution.

Traditionalists maintain that desegregation need not entail smashing to shards a value system that has elevated Western civilization without perverting its moral sense. Radicals believe that racial segregation was but a symptom of an underlying disease inherent in traditional values. They believe that the disease can only be eradicated by attacking the foundational institutions of traditionalism -- the institutions of marriage and private property first and foremost.

In this culture war there can be no compromise. Either traditional values are vindicated, or they are eroded. There is no in-between. The quality of "trust and fellow feeling" of which Obama speaks cannot be regained as long as the culture war continues; our common ground has been lost. It will be regained only when one side emerges victorious. Obama's promises to move beyond the politics of the 1960s are, by definition, empty promises.

What is more, Obama knows they are empty promises. In the war between traditionalism and radicalism, Obama stands solidly with radicalism. Though he has a gift for obscuring his positions, Obama is an advocate of gay rights, a strong believer in the concept of private property as social property, an abortion-on-demand fanatic. His pledge to move beyond the politics of the 1960s is a pledge to achieve unity in the fully triumphant program of the 1960s. If Obama is a Messiah, he is a secular Messiah, preaching the word of Tom Hayden.