I'm Not An Attorney, But Eric Holder Is Dangerous 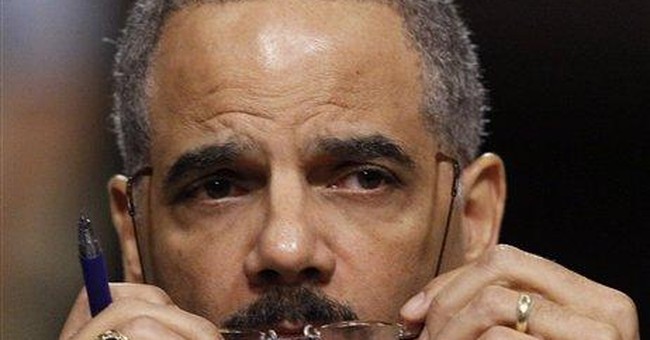 I’m not an attorney.

For better or worse I didn’t go to law school, but rather, I instead went to graduate school to study philosophy.

But you don’t need to be an attorney – or a philosopher – or the Attorney General or the President of the United States or a Representative or a Senator you don’t even need to be a community organizer to understand what I understand.

In fact, if you are one of “those” that I just listed, there’s a good chance that your station in life will blind you from seeing and understanding the reality that is intuitively obvious to “the rest of us.” And the reality is that as President Obama and Attorney General Holder seek to award five Sept. 11 conspirators, including Khalid Sheikh Mohammed, with the full rights of American citizens in a civilian trial, the United States is being undermined.

In the interest of “fairness”- and hopefully as a means of bringing clarity to the situation - let’s get some things straight from the get-go. The five 9-11 conspirators in question have been held all these years in a facility known officially as the “Guantanamo Bay camp.” And the use of the word “camp” matters profoundly.

Yet, in fact, the thugs at Guantanamo Bay are neither “criminals,” as we have historically defined them in the West, nor are they “enemy soldiers” or “prisoners of war.” They are something the likes of which we have never dealt with before, and as it appears to this mere layperson, neither U.S. law nor international law adequately contemplate how they should be addressed.

Some of this legal ambiguity was evident in the public rhetoric of our previous President. George W. Bush frequently stated during his eight years in office that the U.S. was engaged in a “war on terror,” while at the same time claiming that our nation’s mission was to “hunt down the terrorists and bring them to justice.” To us laypeople, that seemed like a U.S. President assuring the world that America would be the “good guys” even while under duress, yet at the same time we would not allow ourselves to be undercut.

But in legal-speak, it would seem that Bush’s remarks could be construed as contradictory. By legal definition, a war is not a legal proceeding, and what happens on the battle field is not the same thing as what happens in a criminal investigation.

So now we’re in the era of Obama. And while in the face of a Muslim Army Major murdering 13 of his fellow soldiers President Obama insists that we must not “rush to judgment,” Obama’s Attorney General Eric Holder has nonetheless “judged” after ten months that these five 9-11 conspirators need a civilian trial.

And Mr. Holder’s vacuous responses to even the simplest of questions should be deemed “unacceptable” by all Americans – even attorneys.

What happens to Khalid Sheikh Mohammed, if he is acquitted? “Failure is not an option” Mr. Holder explained in a Senate inquiry. Oh yeah? What about that thing called “due process?” Has the outcome of this trial been pre-determined? Are we to understand that “the fix is in?”Even a lay person like me can see that the outcomes of court trials are often highly unpredictable.

Has an enemy combatant ever been granted a civilian trial before? Holder assured the inquiring Senators that he would “have to look at that” – which meant that either he hasn’t “looked at that,” or that the honest answer would not support his decision. And how could Holder be so certain of a conviction in a civilian trial, when Mohammed had already plead guilty in a military tribunal? Holder couldn’t answer that either.

And then there was our President, Barack Obama, who also stated that KSM will be convicted and executed. But what did that mean? Was this the President merely expressing confidence that his vision would become reality, as politicians so often do? Or was this the Executive Branch of our government pr-determining what the judicial branch will and will not do?

To those in the legal profession – where are you at with all of this? Are we talking here about a mere “show trial?” Is the American Bar Association okay with the Executive Branch running over the top of the judiciary?

For us mere “laypeople,” the thought of President Obama and Eric Holder pre-determining the outcomes of civilian trials is a very chilling proposition.