"Safe Toys For Our Children" versus "The Global War On Terror" 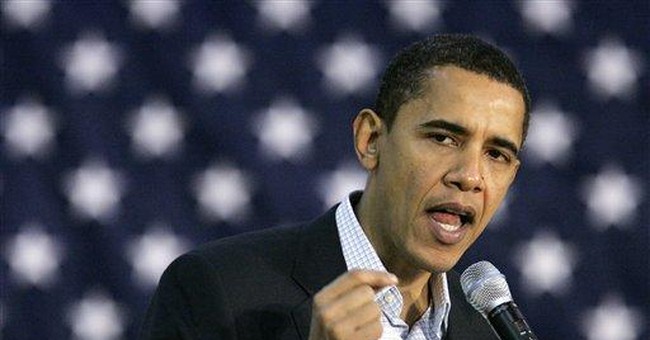 We must be living in separate worlds.

That was the only conclusion I could arrive at, as I recently sat and watched video coverage of a major presidential candidate’s speech in Iowa.

It was early Thursday morning, two days after Christmas. I was preparing to host the mid-morning talk show at Washington, DC’s 630 WMAL, one of the many talk radio outlets around the country for which I work.

While sifting through the morning‘s most recent headlines, I happened to glance up at one of the television monitors in my studio, which was tuned to CNN. And the image on the screen said it all.

Senator Barack Obama was standing at a podium delivering a speech, while the podium displayed two signs attached in the front. One sign bore his familiar “Obama ‘08” logo; the other sign bore the theme of his speech: “Safer Toys For Our Children.”

What a neat thought during the week of Christmas. Parents across the United States had just finished gift wrapping likely thousands of toys. And children had just finished unwrapping these toys. And now many parents and kids were likely deciding whether they would keep the toys or return them or exchange them, and many parents were likely concerned about the safety of those toys - - especially the ones manufactured in China.

And here was Barack Obama, assuring Iowa voters than when he becomes President, his administration will work to ensure “safer toys for our children.”

I stopped and contemplated this for a moment. I was once again reminded that, for most of this past year, watching the presidential campaigns from each of the two major parties has been like watching people in parallel universes. And while all the candidates talk about things that “threaten America,” Democrats and Republicans have very different ideas about what those threats are.

On the left side of the aisle, our nation’s greatest threats are mostly home grown. In no particular order, the list includes: global warming; pharmaceutical companies; a lack of “free” health care; “tax cuts for the rich;” “partisanship;” oil companies; “the status quo in Washington;” “a lack of good jobs;” increases in college tuition costs; and now, apparently, “dangerous toys.” To the extent that Democrats talk about international or militaristic threats, those all seem to be home grown as well - - it’s a dangerous world because President Bush has made it dangerous and has damaged our global reputation, but when he’s gone and America embraces a “humble foreign policy,“ the world will like us again and, presumably, the dangers will go away.

On the right side of the aisle, things look different. The list is probably shorter, but seemingly more succinct at the same time. For the Republican candidates the threat list includes: terrorism and the ideology of Islamic extremism; our dependence on foreign oil; taxes; the nation’s insecure borders; out-of-control federal spending; an incoherent immigration policy; federal waste; a lack of market competition in the health care industries; the “death tax;“ and hostile nations that develop nuclear weapons.

To be fair, no presidential campaign nor any administration is complete without adequate attention paid to both domestic and foreign affairs. And historically, Republicans and Democrats have almost disagreed as to how domestic and foreign matters should be prioritized, and how best to address them.

Yet from where I sit, the parallel universe analogy continues to hit home as I watch many of the Democratic candidates. Sure, healthcare in America is a mess. But Hillary’s plan for “fixing” it - - complete with her redistributionist economic model - - and her unwillingness to even consider that market competition could improve matters, is not something that I even recognize as American, nor can I fathom that her approach would improve the quality or availability of healthcare.

And, yes, faulty consumer products - - including “dangerous toys” - - is a legitimate problem. Yet it never occurred to me to look to the President of the United States to solve such a problem. In fact, hearing Obama’s explanation of how he’d “solve” the problem seemed even further removed from the true duties of the Executive Branch, than did President Clinton’s attempt to “solve” the baseball strike of the 1990’s.

But fortunately, both universes were disrupted about an hour after I saw Obama on CNN, with the news of former Pakistani Prime Minister Bhutto’s murder. The news was and still is horrific, and could bring about disastrous consequences. Yet in a way it’s a gift for Americans: suddenly, the presidential candidates of both parties will now be required over the coming days and weeks to tell us how they would solve a real, dangerous, international crisis.

I’ll be especially curious to see how Hillary’s eight years of “experience” has equipped her to handle this, or if Obama can offer a way to ensure America's safety - - just like he has promised “safe toys.”