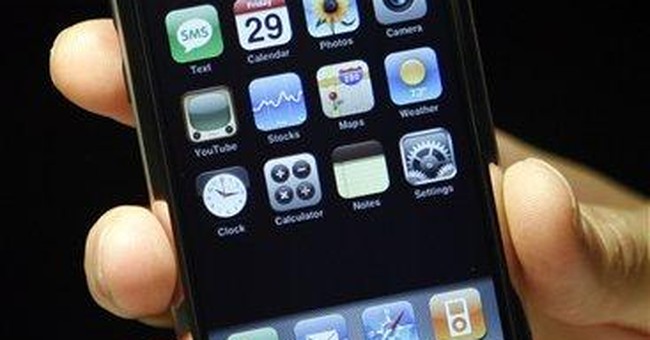 When people are willing to arrive early and wait in line for hours or days, just to be the “first” to observe this or that, well - - that’s an “attention grabber” - - and it says something about people’s preferences and tastes.

One of the most amazing recent displays of this happened with the unveiling of the new Apple iPhone. This “smart phone” gadget not only allows you to make telephone calls, it also serves up music, video, email and webpages, all built around an easy-to-navigate touch screen in lieu of the typical telephone buttons.

It’s also noteworthy to consider what the Apple iPhone doesn’t entail. Things that have become standard equipment for many other mobile telephones, like video games, songs as ringtones, and a touchtone keyboard, are not a part of this new creation.

It’s as though the folks at Apple really got a firm grip on what it is that Americans want and need the most in the realm of mobile communications and electronic gadgets - - and what they don’t want so much - - and put the important stuff together in one great package.

Apple has become accustomed to hitting these kinds of homeruns in recent years. In fact, they’ve created such a loyalty to their products that hardcore Apple enthusiasts are sometimes referred to as members of the “iCult.” And the reason for the enthusiasm and loyalty seems fairly obvious: Apple products deliver what a lot of people want and need, and they do so with reliability.

Now, imagine if other individuals and organizations got this vision. Imagine, for example, if a presidential candidate got a firm grip on what America wants and needs - - and what America doesn’t want and need - - and then delivered.

But I’ve got to believe that there isn’t one candidate in the race right now who wouldn’t love to invoke the kind of loyalty and enthusiasm that Apple has engendered. And for this reason, if for no other, I think there might be something to be learned from Apple.

Let’s start by acknowledging that Americans are far more divided, and far more partisan about their politics and worldviews than they are about consumer product choices. And this partisan divide is most evident during periods like they one we’re in now - - the primary campaign season.

Still, the dramatic contrasts between the respective parties seems a bit absurd. Listening to the Republican candidates, for example, you quickly get the idea that the greatest problem our nation faces right now is the ongoing threat of terrorism (which I happen to believe is correct).

On the other hand, the rhetoric from the Democratic candidates suggests that the greatest threats to our nation are “global warming,” and the lack of “free” healthcare. For them, it’s as though there is no real threat from other people who wish to do us harm - -that’s all a lie from the current President - - and a “more diplomatic/less militaristic” approach will make everyone like us again.

I’d sure like to see a candidate from my party - - the Republican party - - take the lead on all these issues, both foreign and domestic. You think the threat of terrorism is our top concern? Great, I’m with you, candidate. Now show us how we are to better handle this threat, including the problem of Iraq, going forward.

And end your silence on healthcare, candidate. End it now. There IS a healthcare problem for millions of Americans (even many middle-class Republicans), and the naïve, “free healthcare” proposals of the Democratic party will make matters worse for everyone, not better. Start telling us about legitimate private sector solutions - - medical savings accounts, perhaps - - and how our nation can create an environment where healthcare companies must provide even better services at more competitive prices.

And what about issues of energy and the environment, candidate? Most Americans are highly skeptical about the outrageous claims of the global warming zealots, and for good reason. But don’t let Al Gore and his gang stop you from talking seriously about alternative energy sources. It’s a matter of good stewardship - - and a geopolitical necessity - - to reduce our dependence on foreign oil. You can do this candidate, without buying in to the eco-centric nonsense.

This is just the beginning of what could become a compelling and productive campaign platform. There might be risks involved, but it could also be the start of something new and innovative.

Of course, nobody said it would be easy to get a firm grip on what Americans want and need, and what they don’t want, and then to wrap it all in to one great package.

But the folks at Apple have, perhaps on some level, shown the way.