Kudos To The President - - That Is, President Klaus 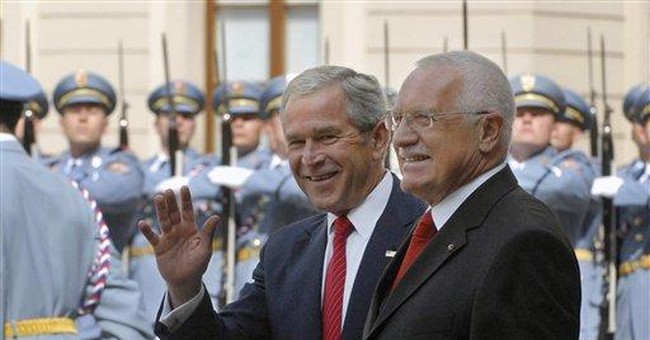 I might embarrass myself with this, but nonetheless I have an admission to make: I came of age, politically speaking, during the presidency of Jimmy Carter.

Oh sure, I have plenty of memories (both good and bad) of Nixon and Ford. But my experience of the ways in which White House policy can impact one’s day to day life first emerged while Carter was in office.

Much of this experience was garnered through observing my own parents. I remember very well their shame over the Iranian hostage crisis; their anxiety over the economic stagflation of the times; and perhaps most vividly, their worries over the threat of future Soviet domination.

Fortunately the world changed, we learned how to grow our free-market economy, and the threat of Soviet domination dissipated. But the earliest years of my childhood and the influence of my parents left me with at least two profound convictions about the world: A) the grip of communism is a tight one; and B) the future of free, virtuous, and prosperous societies is anything but guaranteed.

Because of these convictions, I tend to view the former Soviet Bloc nations with tremendous hope, but also with a tentative, “let’s wait and see” kind of outlook.

And given all this history that has unfolded just within my lifetime, it’s a bit amazing to me that I must now make this admission: my worldview and sensibilities more closely resemble those of a current Eastern European head of state, than those of many of my fellow Americans.

Vaclav Klaus, the President of the Czech Republic, has weighed-in on the notion of “global warming.” Unlike many people here in the United States who unquestionably accept the dogma of it all and participate in the frenzy over the alleged “crisis,” President Klaus has the good sense to ask questions, and to put it all in perspective.

He quite correctly relates the proposed weather “remedies” to a concept that, unfortunately, is quite abstract for many in the contemporary Western world - - the concept of personal and economic liberty. But because he makes this connection, he ends up saying many of the same things that I’ve been thinking - - and that really amazes me.

Writing in The Financial Times journal, President Klaus noted some objective facts about the weather - - the fact that during the past century the average global temperature increased only .6 percent, and the fact that “all of us have noticed that even during our life times temperature changes occur (in both directions).”

President Klaus further noted that many powerful people around the world, including British Prime Minister Tony Blair, German Chancellor Angela Merkel, authorities at the United Nations, and the Academy Award Winning Al Gore, all have the audacity to - - literally - - try and change the weather.

After making these observations, President Klaus states what is really going on here: “The dictates of political correctness are strict,” he writes, “and only one permitted truth, not for the first time in history, is (being) imposed upon us. Everything else is denounced.” He also insists that “rational and freedom-loving people have to respond.”

Now, why is it that here in the wealthiest nation on earth, Al Gore can say things like “the earth has a fever,” and “the debate (on global warming) is over,” and millions of Americans believe it without question - - while a man who heads-up a democracy that is less than twenty years old has enough “Yankee spirit” in him to doubt, question, and even contradict the environmental orthodoxy?

The answer lies in his personal background.

“As someone who lived under communism for most of his life,” Mr. Klaus writes, “I feel obliged to say that I see the biggest threat to freedom, democracy, the market economy and prosperity now in ambitious environmentalism, not in communism. This ideology wants to replace the free and spontaneous evolution of mankind by a sort of central (now global) planning.”

In short, Mr. Klaus knows first-hand what it is like to live under oppression - - and he knows what rhetorical and propagandizing lengths oppressors will go to in order to impose their oppression.

With this in mind, he goes on to make some observations that are for many of us obvious, and yet are elusive for far too many Americans; that small climate changes do not require far-reaching restrictive measures; that the suppression of freedom and democracy should be avoided; and that we shouldn’t “scare ourselves with catastrophic forecasts, or use them to defend and promote irrational interventions in human lives.”

In reality, the threat of “irrational interventions in human lives” will never go away. Still I am comforted to know that at this moment in time, President Klaus is with us as a voice of reason for the Czech Republic - - and for many misguided Americans, as well.