Clinton And Karl: Too Close For Comfort 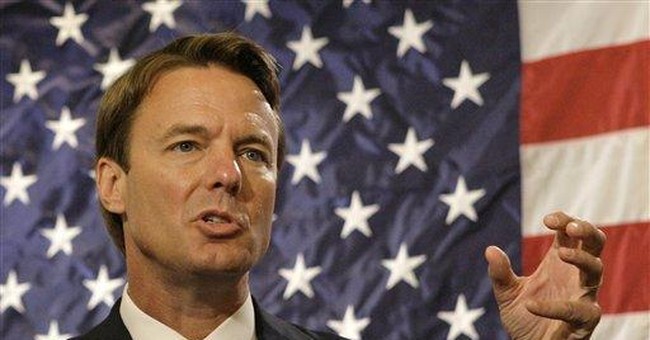 Now that you've had a few days to consider, what do you think?

For the casual channel-surfer, it may have looked like an episode of Pat Robertson's "700 Club" religious program.

But it was not the "700 Club," and Pat Robertson was nowhere to be found.

Indeed, it was CNN hosting and televising an event last week, co-sponsored by the liberal “Sojourners” Christian advocacy organization, wherein three presidential candidates talked openly about the significance of religion.

Now, there are at least a few things about this combination -- CNN, political candidates, and talk of religion - - that might make one a bit cynical.

This might lead one to think that the professional journalists at CNN had lost their objectivity, and were trying to use their platform in such a way as to insure that the next President is a Democrat (surely that couldn’t happen…could it??).

One might also be a bit cynical about the timing of the event. To be sure, the program signaled a shift in how the political left and the left leaning media are now collectively treating this phenomena called “religion in the public square” - - something previously regarded as awkward and to be avoided.

And recent history is replete with plenty of hostile reactions to the “God talk” of political candidates.

For example, when then-Governor George W. Bush claimed in a 2000 Republican candidate’s debate that Jesus Christ was his favorite "philosopher," his remark was regarded as controversial.

At best, Bush was portrayed as a buffoon who was pandering to the “religious right” and who obviously couldn't name a "real" philosopher; at worst, Bush was a zealot who, if elected President, would surely "impose his religion" on the world.

Later in 2000 when Senator Joe Lieberman was selected to be Al Gore’s Vice Presidential running mate, the openly Jewish Lieberman was chastised and accused of being gratuitous for his repeated public offerings of “thanks to Yahweh” for the opportunity to run for national office.

So it could be a bit shocking to realize that now, in the year 2007, candidate John Edwards can speak on CNN of his “love” for his “Lord, Jesus Christ,” and the news media regards it as okay. But resist the temptation to be cynical, and consider carefully what has been revealed about these candidates. In particular, consider what Senator Clinton revealed about herself, and her views of American life.

When quizzed about issues of poverty and the environment, Mrs. Clinton was critical of nearly every sector of our society- - the “adult society” has failed; “churches have failed;” “the free market has failed;” “we’ve all failed” - - and to make things right, “something needs to be taken away from some people.”

Mrs. Clinton made it clear that, in her view, the freely-made choices of individual American citizens, choices made in the contexts of their personal lives, their business activities, and their faith communities, have failed to produce the kind of society that she wants, and the power of government must be utilized to take away certain resources from certain persons and to give certain resources to certain other persons.

In short, Hillary Rodham Clinton was speaking the language of “liberation theology,” a theological system that views the historic Christian concept of “the battle between good and evil” as a matter of struggle between the social classes, and embraces the tactics of Karl Marx to correct the “injustices” against the poor brought about by the “rich.”

Clearly there are shreds of truth in Mrs. Clinton’s comments: caring for the poor and stewardship of the earth are Judeo-Christian imperatives. However, Mrs. Clinton tragically attaches these noble and necessary goals to a failed and unjust economic model.

If it hasn’t been apparent in the past, the assumptions Mrs. Clinton makes about the American way of life are now quite apparent: she assumes that economic activity is a “zero sum” enterprise wherein one person’s gain is another person’s loss; she assumes that free individuals cannot choose wisely and justly on their own; she assumes that government agents and agencies can choose better than private persons and organizations (even better than churches).

These revelations should signal a wake-up call to all who love liberty and prosperity. And conservatives in particular, both fiscal and social conservatives, must now begin to defend freedom and capitalism, because they are most certainly under attack.

Ultimately, conservatives must make the case that the American economic model, imperfect as it may be, is still the best economic model for achieving not only profits and productivity, but virtue and justice as well.

Unfortunately, it is unclear from among the current ranks of conservative political and cultural leadership who is best prepared to handle this task.