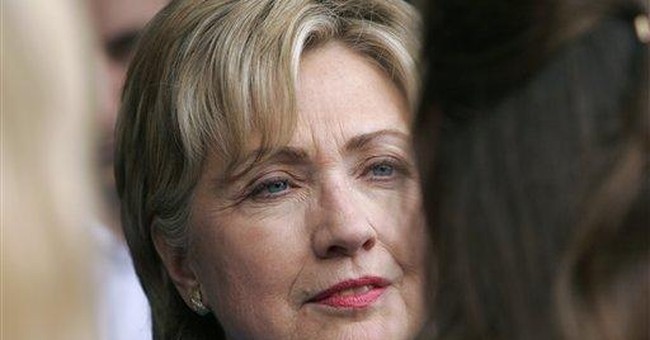 Hillary Rodham Clinton has been doing that thing she does so well - - maligning rich people.

During a major campaign address delivered in Manchester New Hampshire, Mrs. Clinton explained her intent to eliminate the so-called “tax cuts for the wealthy,” and introduced new ways for government to spend American’s money.

“Let’s be clear” Mrs. Clinton remarked as she argued for raising taxes, “it’s not as if America hasn’t been successful in the past six years…”

But then without even contemplating the possibility that maybe - - just maybe - - cutting the taxes of all Americans has played a role in America’s recent “success,” Mrs. Clinton went on to decry the idea of America being an “ownership society”(a fitting label given the all-time high level of private home ownership among people of all ethnic groups) calling it instead an “on your own society,” and expressing her preference for a “we’re in this together” society.

And what does this mean? For Clinton, a “were in this together” society is a society of “shared responsibility” - - AND “shared prosperity.”

Clinton made it clear that her vision for America’s future is a collectivist vision - - one that focuses primarily on goals for the group (the broader society), while things like personal responsibility, the wellbeing of individual persons, and individual achievement become secondary, if not tertiary concerns.

Senator Barack Obama has also been doing his best to pile-on, drawing a direct connection between the two enterprises of punishing the wealthy, and giving away healthcare services. His proposal is simple enough - - raise taxes on “the wealthiest Americans,” and use that revenue to provide “free” healthcare to others.

Similarly, John Edwards has continued with his themes of poverty and low-wage work, promising to raise taxes on Americans earning $200,000 a year or more.

Now, the hypocrisy of Edwards and Clinton is staggering.

For example, much of Clinton’s spiteful rhetoric about some people having “too much wealth” seems at odds with her lifestyle of expensive, fuel-guzzling private jets - - dispatching one here, sending another to pick her up there, swapping private planes mid-trip because the interior design of one isn’t aesthetically pleasing to her - - most all of which are provided to her by wealthy personal friends or purchased with campaign donations.

Edwards, on the other hand, has become know for lecturing on college campuses about the immorality of poverty and tuition hikes, while charging schools and students up to $55,000 per speech - - this from a man who enjoys a lifestyle of four hundred-dollar haircuts and a thirty-thousand square foot private home.

The “do-as-I-say-not-as-I-do” approach of Clinton and Edwards, wherein they criticize the existence of an American wealthy class while at the same time surrounding themselves with wealth‘s comforts, is a travesty.

But most problematic about Clinton, Edwards, and Obama, is their apparent disregard for the ways in which wealth is created, and their hostility for those who engage in that enterprise.

Their proposals seem to bare no resemblance to very basic economic principles, and the thoughts of, oh, say, Adam Smith.

Often regarded as an economist and the “father of capitalism,” Smith was a moral philosopher from the Seventeen-hundreds who surmised that governments become oppressive when they control a nation’s wealth, and that governments are far less effective in managing wealth than are individual persons.

And how about recent history as our teacher? In Hillary’s lifetime alone the world has seen the painful, brutal collapse of multiple “we’re in this together” societies, including East Germany and the entire Soviet Union, and the slow, excruciating implosions of oppressive North Korea and Cuba.

No serious recent contender for the American presidency has proposed an American government devoid of any social safety net, nor has any candidate suggested that some Americans should necessarily do without adequate food, housing and healthcare.

Their repeated promises to punish rich folks (and, yes, taking away an individual’s money is “punishment”) might make for strategic politicking during a Democratic primary season, but it is most certainly NOT good for the country and its future. When government focuses primarily on “the good of all” rather than on safe-guarding the liberties of the individual, we all become cogs in the big government wheel - - and in that scenario, everyone suffers, especially the poorest among us.

Ultimately, Clinton, Obama and Edwards fail to acknowledge that their utopian visions are wholesale reliant on the hard work, creativity, risk-taking, and wealth creation of America’s entrepreneurs.

Oh, and, by the way…some of those people just happen to be wealthy.