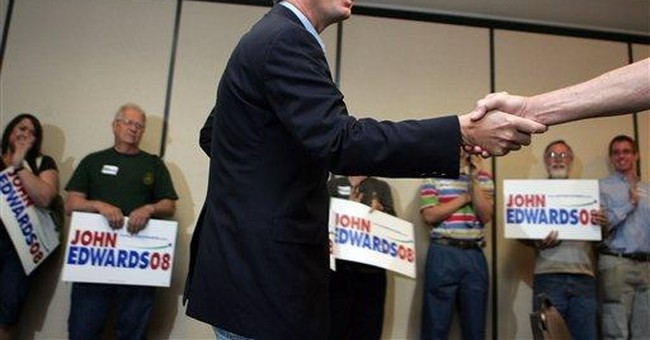 What a difference a decade makes. Or five or six decades, for that matter.

Remember back in 1994 when President Clinton contemplated an invasion of Haiti? Yes, I said “invasion,” as in “an invasion of another country.”

Invading other countries is a big, fat “no-no” for twenty-first century Democrats. But less than two years into his Presidency, Bill Clinton, we now know, had an invasion not only planned, but scheduled (although it never actually happened).

The reason? President Clinton believed that the U.S. had an interest, and perhaps even a duty, to respond to evidence of atrocities committed by Haiti’s military dictators.

The U.S. trying to end the atrocities of a dictator. Gosh that sounds familiar.

Another reason for the Haiti plan was to reinstate the freely-elected President Aristide - - in other words, to uphold democracy. Wow, that sounds familiar, too.

Consider the choice of presidential hopefuls Barack Obama and Hillary Rodham Clinton to vote “no” last Thursday on a war funding bill. As the Senators focused on fighting each other for support from the passive anti-war constituency, they sought to deny financial provision for U.S. military forces fighting our nation’s enemies.

The prospect of a “President Obama” or a “Clinton 44” seems to bare little similarity at all to the presidency of, say, Harry Truman. Democrat that he was, President Truman seemed to grasp the challenges and threats of today - - and did NOT shrink from them.

However unpopular or uncomfortable his choices were, Truman brought the U.S. to victory of Germany, and dropped atomic bombs on Hiroshima and Nagasaki. But never mind the fact that the bombings lead to the surrender of Japan and the end of the second World War. By today’s standards, President Harry Truman would be eligible for the same special Democrat labels attributed to the current President - - “war monger” and “world’s worst terrorist.”

And what would President Truman think today of his fellow Democrat John Edwards? With troops deployed abroad, Edwards, in a “major foreign policy speech,” declared that the “war on terror” is but a “bumper sticker slogan’ concocted by the President.

No doubt Edwards has a valid point - - the current “war on terror” could be more accurately described as a war against “Islamo-fascism,” given that “terror” is merely a tactic, and the real enemy is a radicalized anti-western ideology.

But Edwards made no reference to these distinctions. Instead, he proposed removing troops from Iraq, closing down the Guatanamo Bay prison, and “rebuilding the military” - - in short, a vision of a disengaged, inwardly-focused America.

Imagine how different the world would be today, had Truman been so limited in his own vision.

Of course today’s Democrats seem to prefer focusing on “domestic issues” (and often naively assume that we can still choose not to engage the scary world outside our borders) - - but even on this the party is worlds apart from one of our nation’s most fondly remembered Democratic Presidents, John F. Kennedy. Not beholden to the politics of class envy, Kennedy fought for cutting taxes not only among the poorest of Americans, but for the middle class and the wealthy, knowing that such policies would encourage personal investment.

The Kennedy tax cuts became the law of the land in February of 1964, and an economic boom ensued - - but there seems to be no lesson learned. Far from being Kennedy-like, Senator Clinton displayed her complete contempt for free market enterprise earlier this year with her Hugh Chavez-style comment about wanting to “take those profits” from American oil companies. As for Senator Obama, he’s already on the record pledging to roll-back Bush’s “tax cuts for the wealthy.”

In November of 2006, Americans voted against whatever it was that the Republican Congress did and did not have to offer. But there’s no indication that they voted for surrender - - either on the battlefield, or with one’s personal wealth.