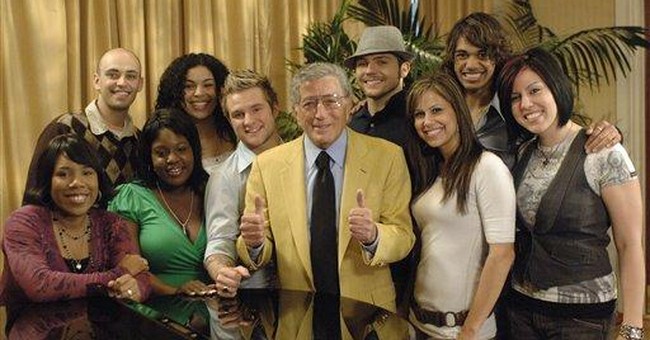 Did Melinda Doolittle deserve to get booted in the semi-finals?

And do you think Jordin Sparks can win it all?

These ladies are not "household names." At least not yet. So if you have no idea who I'm writing about, that's okay - - an explanation, and a lesson about free market economics, is coming up - - so stay tuned.

But first, here's something you probably do know about. Shortly after his November victory in 1992, President-elect Bill Clinton announced publicly that he was going to create a "cabinet that looks like America."

Put in proper context, that comment may have had somewhat of a home-spun, feel-good effect for middle America, but was intended as code-talk for the social and political left saying "the Reagan-Bush white guy era is over, and ‘diversity’ is now the reigning philosophy of Washington."

Of course the Clintons and like-minded others define "diversity" among people in terms of one's gender, skin color, ethnic heritage, and to a lesser degree, socioeconomic background. And given this narrow, simple-minded definition, President Clinton achieved plenty of it in his administration.

Despite this continued “rise to power” of non-whites in Washington over the past six years, the left ironically ignores these achievements, and criticizes Bush for creating “a cabinet that looks like corporate America” - - a sure sign that in the leftist view of things, only “certains kinds of people” can get credit for “certain kinds of accomplishments.”

But whether it’s presidential appointments or university admissions or governmental employment protocols - - and whether or not you think the above-mentioned cabinet secretaries were good choices - - one thing is certain: America’s obsession with gender and ethnicity diminishes the significance of personal merit.

Such thinking places an emphasis on a person’s skin color and body parts, while de-emphasizing one’s talent, performance level, and character. This is not good for American government, nor the American economy.

Speaking of obsessions - - think for a moment about the current state of America’s music industry. Just as opportunities in academia and government often look for a photo first, and a resume’ last, today’s music biz, regardless of genre, is about as narrow - - women larger than a size six and guys who can’t appear shirtless need not apply.

Now it’s no sin to “be hot.” But let’s get honest: “being hot” - - which includes having perfect hair, teeth and complexion - - is the commercial music industry’s affirmative action criteria numero uno, and is far more important than one’s musical talent, achievement or performance level.

Fortunately, this “sexiness” policy is self-imposed and not coerced by the government. But enter “American Idol,” another competing force in an already competitive music industry. Allowing people across the country to compete regionally for a spot on a nationally-televised stage has, at least to some extent, bypassed the offices of music executives and allowed consumers to have more of a say as to who will get “heard.”

And given which performers make it to TV, it would seem that American consumers place a bit more emphasis on musical talent, performance, and achievement, than do the exec‘s.

That’s not to say that American Idol performers are homely. But even adoring fans on blogsites seem willing to admit that their “Idol” favorites are less the perfect 10’s than are many of their counterparts- - yet fans still love their Idol stars.

This doesn’t seem to have diminished the commercial viability of Idol-turned Country Music star Carrie Underwood, or pop star Kelly Clarkson (Note to Kelly: great job with the Ford Mustang commercials. Note to Kelly’s manager: get her out of Al Gore’s fraudulent “rock-for-global-warming-awareness- concert-thing” or whatever he’s calling it this week…she doesn’t deserve to be maligned with this nonsense, and it looks hypocritical given that she plays at NASCAR races).

Whether intentional or not, “American Idol” has begun to advance the cause of “diversity” in the music biz - - not only “diversity” of race and gender, but of body-type, complexion quality and dental health levels - - and has allowed consumers a bit more of an opportunity to choose talent over tight pants.

And thus, market competition works. Government should learn from it.