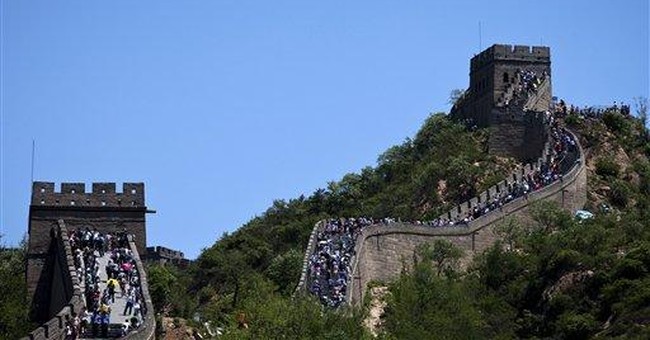 Cats don't herd, nor do entrepreneurs -- until they have to.

This week (Nov. 11), an Associated Press article suggested the "have to" moment for China's entrepreneurs -- the economic revolutionaries who fast-tracked Beijing's economic miracle -- is much closer.

The back story: In the early 1980s, as economic stagnation strangled the Soviet Union, Chinese leader Deng Xiaoping realized he must take the risk posed by freer (but not quite free) human economic enterprise in order to maintain Communist Party control. Communist survival required creating wealth -- new wealth being the source of genuine economic growth -- and creating wealth required economic liberalization.

Deng's deal with the Chinese people, including their entrepreneurs, came with a ruthless stipulation: The Party retained political control. The Tiananmen Square massacre reinforced his maxim: economic liberalization -- yes; political liberalization -- no way.

Party control really means the whim of political functionaries rules, not the rule of law. In China, political whim circumscribes all creativity. The Wall Street Journal argued that young Chinese entrepreneurs despised "the endless wining and dining of government officials" that doing business in China requires. Party cronyism disgusted them.

According to the AP, October disgust has given way to November "demands for change from entrepreneurs who feel a simmering anger at a system that extends privileges, such as cheap credit and monopolies to politically-favored state companies."

The next sentence would cue a hardliner like Deng to send the Peoples Liberation Army to Tiananmen: "Entrepreneurs complain they are denied a say in how society is run, even as their businesses create jobs, wealth and tax revenue."

Except, intimidating non-herding entrepreneurs doesn't require tanks. "Worse," the AP added, "some (entrepreneurs) have endured arrest, torture and confiscation of their businesses at the whim of local officials."

Activist Wang Ying, a 6o-year-old grandmother who once ran a private equity firm, told the AP China's political class had a galling attitude. "You can make money because I allow you to. They say, 'you think the money is yours, but actually, I'm just leaving it with you. I can take it back at any time, in any way.'" Shades of the divine right of kings? Matthew Mitchell's "The Pathology of Privilege" nails these characters.

The article described other examples of theft of property and wealth by government officials using state political, police and economic instruments. It also surveyed attempts by entrepreneurs to organize the fight for individual rights. Wang said she knows she confronts great personal risks, but her "have to" moment, to organize and act, has come.

China's entrepreneurs face a long, tough fight for liberty. However, their economic success is verifiable, and now they are politically visible. China's entrepreneurs may well be part of an emerging global phenomenon. Facts are stubborn things, and economic facts are defiantly stubborn. Today, anyone so inclined can determine which political environments protect and reward economic creativity. In other words, polities that advocate and sustain free enterprise and entrepreneurial liberty. Anger at political economic favoritism and political theft of wealth also simmers in Africa, throughout Asia, South America and, yes, in America as well.