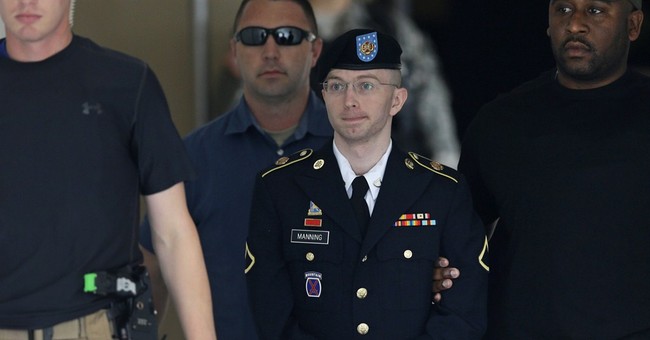 Following his conviction this week on at least five counts of espionage and several lesser charges, including fraud and theft, U.S. Army Pfc. Bradley Manning will now do hard time in prison.

In certain circumstances, spies deserve capital punishment. Several decades in jail strikes me being as Manning's criminal due, however.

Treason rates the death sentence, but Manning didn't commit treason. In fact, he beat that rap.

Manning's theft and espionage, in fact, were rather unspecific. He stole information by the megabyte, with scant selectivity and little reflection. He looked for secrets addressing topics that assured sensational media coverage.

I think it already has. Manning's filched documents provide everyone -- friend, foe or bystander -- with a detailed look at American information gathering, information assessment and decision-making in the sensitive realms of foreign policy and defense.

Liberals forever extoll "soft diplomacy," the goodnik mission of diplomats in contrast to the "hard diplomacy" soldiers wield. Diplomacy requires able, careful diplomats. Yet Manning's leaked State Department cables provide our adversaries with a highly granular, candid and often personal portrait of a generation of U.S. diplomats. The cables reveal how specific diplomats operate, what they seek to accomplish and with whom they talk.

Though Manning's leaks did not place American diplomats in immediate mortal danger (a treasonous act), the leaks damaged their ability to conduct diplomacy, both near and long term. The private first class clearly does not understand that diplomacy is America's first line of defense.

Manning claims he became "disillusioned" with a foreign policy focused on "killing and capturing people" -- people, he said, not terrorists. So he spied and leaked information that would damage the agencies and agents conducting American foreign policy.

Manning's passionate defenders argue this damage serves the greater good, but they bear no personal responsibility for protecting American lives and vital interests even if they benefit from that protection.

Several State Department cables were classified in deference to the sensitivities of foreign diplomats. One quotes a senior Chinese official bluntly describing North Korea's regime as crackpot. Is an honest comment, very likely an incremental step toward diplomatically reducing the threat of nuclear war in East Asia, worth keeping secret? Manning and Assange exposed it, but their vision of greater good is rather criminally self-serving.

Eventually an adversary will use insights gained from analyzing Manning's stolen documents to conduct operations that threaten American lives and livelihoods. Delayed treason, however, isn't a crime.

Manning, demoted to the rank of convict, has earned his next military tour. Before his trial, the military kept Manning in its Joint Regional Correctional Facility. The JRCF incarcerates pretrial defendants and prisoners with short sentences (five years or less). It's located at Ft. Leavenworth, Kan. -- but don't confuse it with its famous Leavenworth neighbor, the U.S. Disciplinary Barracks. The "DB" is what Hollywood means by "Leavenworth." News media report Manning will do his stretch in a DB cell.

The U.S. Army Command and General Staff School is also located at Ft. Leavenworth. The staff school runs what joking soldiers attending it refer to as "the short course." The Disciplinary Barracks? It runs Leavenworth's "long course." Would-be spies, take note. The long course isn't a death sentence, but it is certainly no joke.

To find out more about Austin Bay, and read features by other Creators writers and cartoonists, visit the Creators Syndicate Web page at www.creators.com.