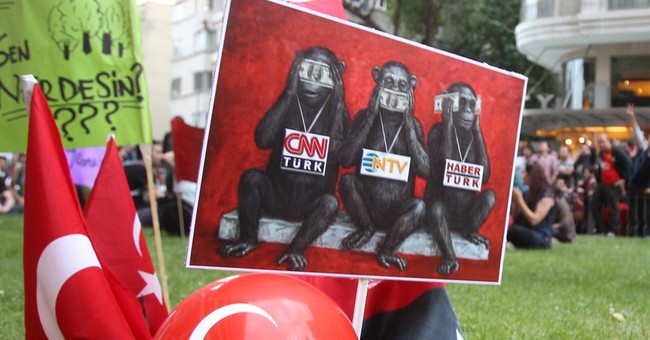 Surprise is understandable. Erdogan and his moderate Islamist Justice and Development Party (AKP) have won three national elections in a row. Erdogan has overseen a decade of Turkish economic growth in an era of economic recession. He has also emerged as a major figure in international affairs.

Yet within the space of a week, a small protest over felling trees near Istanbul's historic Taksim Square has escalated into a national expression of disenchantment. Based on a June 4 interview with Emre Kizilkaya, foreign news editor of the Turkish daily Hurriyet, the disenchantment starts with Erdogan himself. Erdogan's penchant for self-serving, unilateral decisions have fueled public suspicions that he intends to undermine Turkey's democracy by changing the constitution so he can retain power.

Here are excerpts from the interview:

Austin Bay: Emre, you've just returned from Taksim Square. What did you see?

Emre Kazilkaya: Thousands of people from all demographics were protesting the government, while nearby, police used tear gas on another group. The smoke (gas) reached us. I couldn't breathe or see for a while. I found milk at a protest tent and put it on my eyes. That helped.

AB: What started the Istanbul protests?

EK: Erdogan announced that an old military barracks would be rebuilt at Gezi Park, a wooded park near Taksim Square. When he said it would be a shopping mall, people got angry. They saw this one-sided decision as the last straw. Erdogan makes many one-sided decisions, like restricting alcohol.

EK: Yes. People saw the alcohol restrictions as another (Islamist) Jacobin attempt to change the lifestyles of the citizens.

EK: No. Many protestors, maybe even the majority, are not CHP voters. The CHP tried to use the protests at first, but then stayed out. ... Gezi Parki protestors were insisting that this is a movement of individuals (not parties). ... The protests expanded because the police used force on peaceful protestors. Understand the protests spontaneously organized (via social media) to say, "Stop trying to change our lifestyles and our environment."

AB: Do the protests reflect a cultural clash in Turkey?

EK: I don't think this movement is so much about culture. I see protestors who have very different lifestyles, including young women with headscarves and old war veterans who admire Ataturk. (Mustafa Kemal Ataturk, founder of modern Turkey and the man who put Turkey on the path to secular, parliamentary democracy.)

EK: Surely. But in the long term, there might be troubles. Turkey's economy is not import-based. And it still didn't adapt itself to new technologies. With this trend, it will fail to use the advantages of its educated young population.

EK: Definitely. It won't force Erdogan to resign, but he'll probably get the message: "Don't try to be president if you'll continue behaving with such authoritarianism."

AB: Last question. Let me quote from a speech I gave in New York, at a December 2011 UN symposium on Ataturk's legacy. "Arab Spring 2011, unsettled as it is, may have given the world an unexpected gift by clarifying the extraordinary value of Ataturk's legacy. The democratic structure he created, the social and political process he authored, are Turkey's most valuable foreign policy tool and greatest domestic asset." In 2013, is Turkey in danger of losing its greatest asset?

EK: Turkey was shown as a model to Arab Spring countries, and this image is surely stained now. Erdogan advised the Muslim Brotherhood (in Egypt) to support a secular democracy and pushed for pluralist democracy in Syria. Now many Arabs in these countries may say to him: "Then, firstly, you gotta practice what you preach, Mr. Erdogan."