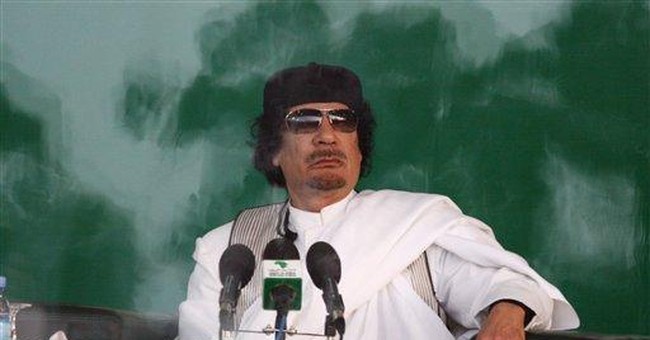 This week, International Criminal Court (ICC) prosecutors announced that they intend to indict Libyan dictator Moammar Gadhafi on an array of charges, including war crimes and crimes against humanity. Gadhafi's regime immediately dismissed the ICC investigation as imperialist propaganda.

For possibly better, but likely for worse, ICC criminal warrants -- or at least the threat of warrants -- are now a weapon in the Libyan Civil War.

Threatening indictment gives diplomats a negotiating tool. Go, Gadhafi, before you are indicted. As a psychological weapon, criminal warrants emphasize the tyrant's personal responsibility for the regime's most grievous crimes and underscore his status as an international pariah.

The political message to Gadhafi loyalists is not particularly subtle: Now is the time to abandon the dictator and make your own deal. Provide ICC investigators with more hard evidence, and the court may reward you with immunity or leniency. Why -- wink, wink -- you might consider launching a coup d'etat and serve as the ICC's arresting authority.

Every district attorney in America knows the trick. It's a way to divide a gang, stir doubt among gang members and further isolate the DA's main target, the gang leader.

An American DA, however, has police SWAT teams to enforce the rule of law, even on the gang's home turf. The DA also has firm jurisdiction. But in Libya's grim situation, which the ICC intends to influence, Gadhafi retains sufficient guns and money to control of a hefty chunk of turf where his whim is law.

Which leads to the downside of actual ICC indictments filed and pursued in the middle of an unresolved war. ICC legitimacy is uncertain. Libya, like many countries (including China, India and the U.S.), does not recognize ICC jurisdiction. Instead of sowing division, actual indictments could unite loyalists if they conclude fighting is preferable to prison. Actual indictments -- if they are respected -- limit diplomatic solutions, such as exile in exchange for quitting power. Gadhafi's buddy Venezuelan tyrant Hugo Chavez might still give him a bolt-hole with great beaches, but an ICC wanted poster makes that option more iffy.

Critics of ICC lawfare during warfare argue that ICC warrants have hindered diplomatic solutions to Uganda's war with the Lords Resistance Army (LRA) and thus prolonged it. In 2005, the ICC indicted LRA senior commander Joseph Kony for numerous crimes, including murder and sexual enslavement. Kony is guilty -- but the battlefield is bigger than the courtroom. Since 2006, peace negotiations have floundered, with Kony's indictment a major issue.

In 2009, mediators reported that Kony wanted a peace deal, but it must guarantee he would not be prosecuted by the ICC. No dice. The ICC stuck to its warrants. Uganda, which originally encouraged Kony's indictment, has indicated it will ignore the warrants if Kony surrenders.

Bashir is guilty, but the Darfur war grinds on while he sells oil to China and travels with relative freedom. Bashir has visited Djibouti since his indictment. No arrest. And no consequences for no arrest. Bashir has turned his ICC charges into a Third World cause celebre. He touts his indictment as an example of U.N. and western imperialism. Gadhafi's propagandists now echo Bashir's tout.

The ICC's limited threat to Gadhafi actually has two sources: NATO aircraft and the Libyan rebels growing combat power. The unresolved war is Gadhafi's real courtroom. Until Gadhafi's army surrenders or launches a coup, the dictator's warfare will render ICC lawfare an exercise in rhetoric, not justice.