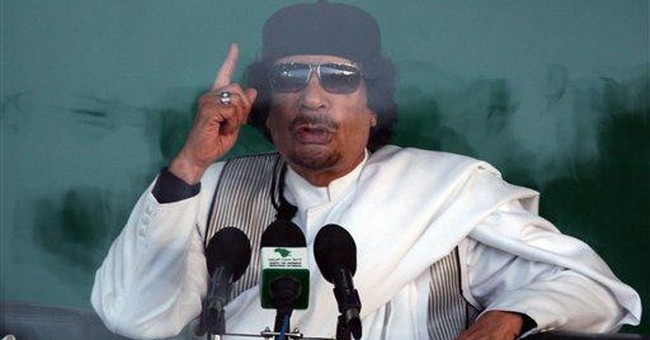 The first step toward achieving modern stability in Libya -- not the brittle and brutal false stability of tyranny -- is regime change.

Despite the White House writhing, the U.N. squirming, the screaming hypocritical silence of the usual media suspects -- toppling Gadhafi is regime change.

Last month, President Barack Obama told the world Gadhafi must go. He could have kept his mouth shut, or his teleprompter shuttered, but he didn't. President Obama said it, and I agreed with him. Then he dithered. I damned that, for as he dithered Gadhafi's heavily armed loyalists and mercenaries retook rebel cities and left them littered with corpses.

Then on March 19, French fighter-bombers destroyed four Gadhafi loyalist tanks, as the armor prepared to overrun the rebel capital of Benghazi. British strike aircraft and U.S. cruise missiles smashed Gadhafi's air defense network. Attacking Gadhafi's tanks was an aerial interdiction of ground forces operation. That isn't merely enforcing a "no fly zone" -- it constitutes a direct attack on Gadhafi's ground forces. From that moment forward, the coalition, led by France and Britain, had chosen sides.

This week, President Obama said, once again, that Gadhafi had to leave, and good heavens, so did a rather sheepish Attorney General Eric Holder.

Yes, gentlemen, Libya needs regime change -- desperately. The popular rebellion against Gadhafi's decades of terror, misrule and theft is an opportunity to do the right thing for the Libyan people and serve America's vital interest in forwarding democratic modernization throughout the world. Let me repeat that for emphasis: throughout the world. If you want to forge world peace instead of merely visualize it on your hippie bumper sticker, democratic modernization is the strategic course of action.

But let's also acknowledge the source of White House writhing and hypocritical media silence: the rich, undeniable irony. Presidential candidate Obama wouldn't support President Obama because ... because -- forget the sotto voce, say it loud. Because to do so would have ratified the logic of the Bush administration's Global War on Terror (GWOT) foreign policy.

Candidate Obama may have pursued smart politics (for the tactical purpose of gaining power) by mainstreaming "Bush lied, people died" and other inflammatory nonsense. The intent was to impugn the motives of those of us who saw the GWOT enterprise as the best choice among many terrible choices. Libya, however, reveals Candidate Obama's foreign policy prescriptions, billed as smart diplomacy by liberal media operatives, as more balderdash for the dustbin of history. It also calls into question just how smart the politics of 2005 to 2009 will ultimately prove to be for Obama and the Democratic Party.

MSNBC and The New York Times may not have figured it out, but pursuing regime change in Libya completely shatters Obama's "I'm not Bush" theatrics. Sure, there are differences. Obama parties, vacations and hits the golf links far more often than George W. Bush ever did.

Libya follows hard on Obama's Gitmo prison fold. I've read the twitchy screed of several apologists who, under the guise of legal opinion, try to provide propaganda cover for Obama's obvious failure to close Guantanamo Bay. These law school scribblers seek to obscure the big picture by magnifying scrawls on the margin. The big picture? The community organizer has put on a cowboy hat.

Gitmo, like Afghanistan and Iraq, and now Libya, were the best of bad choices.

Commanders have to make the best decision they can based on the evidence at hand -- that is the hell of adult reality. The clock ticks, and the bad guys act. To paraphrase Carl von Clausewitz, war is the realm of friction, and friction means mistake after mistake after mistake. The "unknown unknowns" blindside you. Sometimes the "known knowns" do, as well. This is why winning takes courage, resilience and the will to endure. Those are cowboy traits. Obama has a hat. Does he have the cattle?