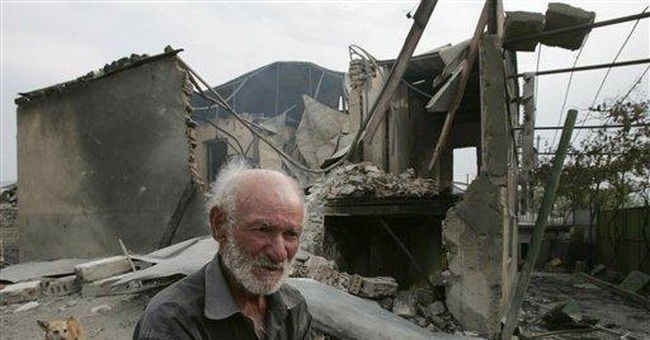 As I write this column, Russian troops have halted their main attack just short of Tbilisi, Georgia's capital. That's smart diplomatically and sharp militarily. In late 1994, the Russians attempted to drive Chechen rebels from Grozny, Chechnya's capital, and suffered a terrible defeat. Georgia lacks Russia's vast military arsenal, but Georgian infantrymen are motivated, and the "closed-terrain" of cities gives quality infantry an advantage.

The phrase "the situation remains in flux" always applies to initial ceasefires, as forces scramble to secure "just one more" road or ridge. Reports from South Ossetia and Georgia's other separatist region, Abkhazia, are confused. The coming days will provide more reliable details.

Nonetheless, a complex and dire diplomatic and political aftermath is upon us.

The aggressive, ultra-nationalist Russia has clearly emerged. James Dunnigan of StrategyPage.com argues a military-minded Russia never really went away, it just submerged in post-Cold War poverty. Dunnigan employs a quip, "The empire struggles back" (think Star Wars' "The Empire Strikes Back"), to describe Russian policy in its "near abroad" border regions over the last 15 years.

With oil prices high, Russia can spend money on warfare. The Russo-Georgia War classifies as a limited strike sending the message that Russia intends to frustrate --at least in the short term -- the post-Cold War expansion of Western Europe. Poland and Romania are in NATO, in part because they both fear an expansionist Russia, but Russian nationalists see the "West rolling East" into their sphere of influence.

Now these concerns and the wounded ethno-nationalist pride that undergirds them may seem benighted and backward to international elites who proclaim global citizenship and advocate a diplomacy based on motivational oratory, but they energize a substantial number of people in a still quite powerful nation-state. International leaders must deal with the attitude and its militant expression. The nation of Georgia definitely must.

In the Kremlin's view, military control of South Ossetia, Abkhazia and part of Georgia proper are post-conflict diplomatic bargaining chips. Russia has other chips. To influence European political, economic or military action, Russia has three convincing tools: nuclear weapons; a veto in the U.N. Security Council; and abundant natural gas shipped to Europe via pipelines.

Moscow may invoke its interpretation of The Kosovo Precedent. Here's a thumbnail sketch: After Kosovo's unilateral declaration of independence, separatism resulting from international action to protect an ethnic minority has an imprimatur. If protecting Kosovar Albanians elicits a NATO invasion, and in the case of South Ossetia, Russian peacekeepers operating under international aegis were already on the ground and involved in the conflict, what is the gripe?

Here's the gripe: Georgia isn't Slobodan Milosevic's thuggish Serbia; it is a democratic state "working its way West" politically and economically. Democracies are qualitatively different from dictatorships. But then Russians roll their eyes and point to Kosovar Serbs in northern Kosovo "unilaterally coerced" into a state -- independent Kosovo. Russia claims "the Kosovo precedent" affects 200 regions or territories in nations around the world. Moscow's insists that Kosovo established a "separatist precedent" for spinning statelets from sovereign nations.

South Ossetia may prove to be "the Moscow interpretation" of Kosovo on terms favorable to Russia, invoked where Russian military power can enforce it and diplomatic maneuvering support it.

There are and will be opportunities for diplomatic initiatives that protect Georgia and its democracy. Diplomacy will be intricate and may include this painful prospect: "revisiting" the status of ethnic Serb communities in northern Kosovo.