Preparing for the Hard Facts of Hurricanes 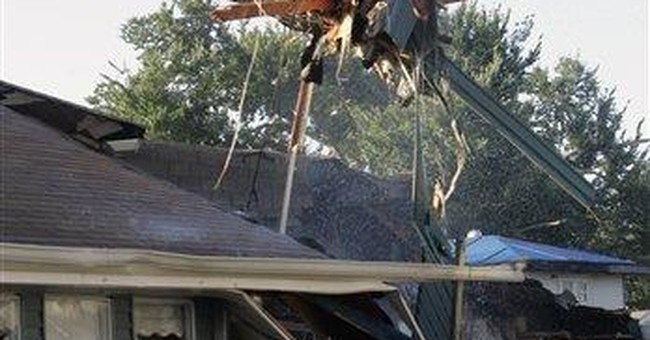 Tropical Storm Erin hit the South Texas coast on Aug. 16. With 2005's Hurricane Katrina as a measure for disaster, Erin rated as a destructive nuisance. Hurricane Dean is a much bigger -- and more dangerous -- storm.

Both Hurricanes Katrina and Dean pale when compared to Hurricane Debbie, however, a category 5 storm substantially more powerful than Katrina, which hit south Texas on June 6, 2007. This "monster 'cane" struck north of the Texas-Mexico border, its winds flattening buildings and its rains flooding neighborhoods. Given its size and meteorological characteristics, Disastrous Debbie may have been as big as America's most murderous hurricane, the infamous 1900 Galveston Storm, which left 8,000 people dead and Galveston, Texas, devastated.

But Debbie -- due more to warning than fortune -- caused few casualties. Advanced notice prepared cities for the storm's furor. Wind and surge damage occurred on the coast and immediately inland, but coordinated rescue teams and relief supply convoys saved lives. With local hospitals affected by the storm, an air-delivered U.S. Air Force mobile hospital deployed to South Texas to help treat the injured.

OK, you didn't hear about Hurricane Debbie, with good reason. The super storm was a disaster response exercise, a "natural disaster training simulation" involving personnel and equipment from the state of Texas and the U.S. government.

"Disaster response" is also something of an incomplete description, for this type of multi-agency exercise is as much about disaster avoidance and disaster limitation. Fictional Debbies are designed to prepare for the eventual hard facts of Katrinas, Erins and Deans.

For decades, states in America's hurricane belt have run hurricane response exercises, so the Debbie exercise isn't a direct result of Katrina's disaster. Exercises, informed by past experience, are opportunities to examine evacuation procedures, to identify local capabilities and local inadequacies, and to develop working relationships among local, state and federal personnel. A crisis is the wrong time to determine which agency at what level can do what jobs.

Several police and crisis response officials have told me that "really useful" exercises reveal weak or antiquated plans. The exercises are a chance to "pass on good ideas" -- which is a politic way of telling someone else to revise and update his organization's plan.

Some states and municipalities certainly take their planning and training exercises more seriously than others -- and yes, that is my slap not so much at Louisiana (the Louisiana National Guard is a serious outfit) but at the New Orleans Police Department. During Katrina, that organization didn't do its job -- in part because it didn't do its job before Katrina.

Hurricane Katrina has certainly increased media interest in training exercises. I also suspect interest by senior leaders at the state and federal level is now at an all time high, and it darn well should be.

The Texas Engineering Extension Service at Texas A&M University designed the "hurricane game," which was held in Austin, Texas. The Texas Department of Public Safety (state police), other state and local organizations, and several federal agencies provided player teams, which were linked by computers and telephones.

During the exercise, I met with personnel from Federal Emergency Management Agency (FEMA) Region 6. FEMA Region 6 consists of Louisiana, Arkansas, Oklahoma, New Mexico and Texas. It is headquartered in Denton, Texas.

U.S. Army Col. Laverm Young is the defense coordinating officer (DCO) for FEMA Region 6. "We, FEMA, are the federal player (in this exercise)," Young told me. "Our role is to add federal capacities to those of the state, if required." Young's team tapped several Department of Defense resources, including U.S. Army CH-47 helicopters and the USAF mobile hospital. The big, twin-rotor CH-47 helicopters are an example of a unique federal asset that met a specific need -- an asset unavailable at local and state levels. The big helicopters could move supplies and equipment throughout South Texas.

These exercises won't stop hurricanes and certainly won't prevent disasters. Perhaps their biggest payoff is improved communications and individual knowledge of capabilities. Those skills can slice through bureaucratic logjams, which are the kind of disaster we can prevent.