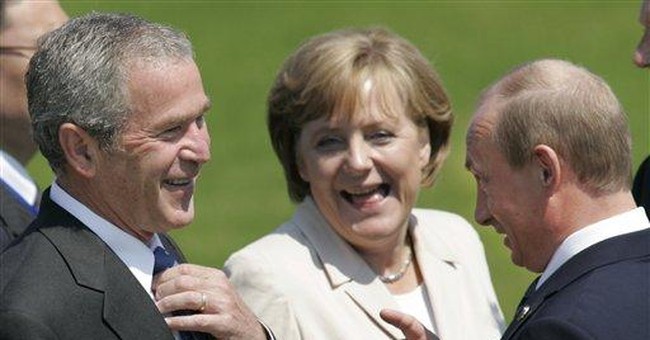 How quickly the "new Cold War" panic has subsided. Recall that a new age of icy conflict between the United States and Russia was the "media action line" for the G-8 conference two weeks ago, with America's proposed European missile defense system the alleged catalyst.

Missile defense also played a role. In May 2001, President Bush said the United States and the world needed a capable, limited missile defense system. Despite Russian threats and cries of imminent doom by European and American leftists, the United States did not renew the 1972 Anti-Ballistic Missile (ABM) Treaty. Technology had killed that Cold War fossil, and so had the passage of time. Strategic threats had changed.

Russia still threw a fit. But instead of a new Cold War, it was a brief "cold spell" at worst. In reality, it was another spate of belligerent Muscovite posturing. Wounded pride surely played a role, and so, perhaps, did a kind of "Cold War muscle memory." What Moscow wanted -- and continues to demand of Washington -- is "special status" within any cooperative defense and foreign policy consultative arrangement.

The Clinton and Bush administrations both gave Russia "special status" -- but neither gave it determinative status. NATO expansion and the Kosovo War, however, proceeded over strong Russian objections -- likewise the drive for a collective missile defense capability.

Yes, Russian President Vladimir Putin did threaten to "re-target" Kremlin missiles and point them at Europe. Putin's subsequent counter-offer -- a calculated offer -- demonstrates it was diplomatic theatrics. Russia needs Europe. An "Atlantic-less" Russian future would be rather limited: A trans-Ural oil vassal of China might be a better deal than an Islamist satrap, but economic integration with the rest of Europe has a better upside both for the wallet and wounded pride.

The real threats to Russia come from the east and south, and the Kremlin knows it.

Which is why President Putin, after the rhetorical threats and press-pleasing anti-Bush sound-bites, ended his missile tarantella with what the United States called "some interesting suggestions."

Putin offered a radar site in Azerbaijan and later suggested interceptors in Turkey, at sea and perhaps in Iraq. Putin's proposals don't add up to a system that would stop an Iranian missile volley. But the specific sites weren't the point. Putin signaled a Russian interest in collective missile defense.

NATO Secretary General Jaap de Hoop Scheffer, when addressing missile defense, stresses the "indivisibility of Allied security" and the need to move to "concrete cooperation" with Russia. Putin's proposal is a step toward NATO's goal.

The United States, the United Nations and Russia do face a genuine conflict of interests: resolution of Kosovo's "final status." Russia fears setting a precedent for European "devolution" (read that as Chechnya). It also sees itself as the traditional protector of the "south Slavs." However, we hear little from the commentariat about this collision.

One reason Putin's ABM tantrum excited Euro-lefties and many Democrats is they have a long-term political investment in opposing missile defense, beginning with bitter condemnation of Ronald Reagan's Strategic Defense Initiative. Democrats portrayed Reagan's decision to pursue missile defense as the dangerous policy of "a Republican warmonger." They called Reagan "Hitler" and a "cowboy" -- the names they use to describe Bush today.

Time to deal with the irony: Someday a collective ABM system will defend former antagonists.