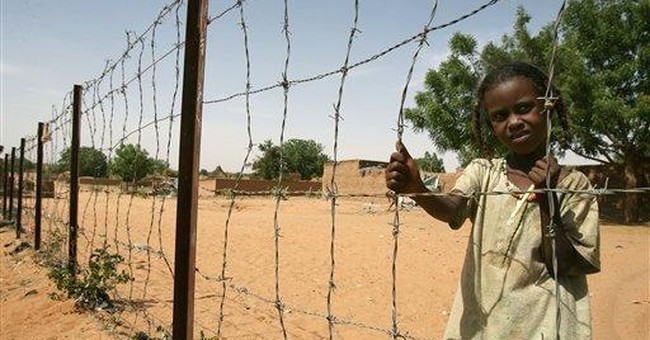 As bloodbaths go, Khartoum's Darfur script is as common a sub-Saharan African orchestrated crime as it is deadly.

Darfur is a war of displacement. Sudanese Air Force bombers and Khartoum-backed horse- and jeep-mounted militias start the process of displacement by attacking defenseless villages and turning their residents into refugees. Yes, they kill a few people with their bombs and small arms, but the big killers in Darfur are exposure, starvation and disease.

Displace people from their homes, and they die from exposure to the elements. Separate farmers from their farms and food stocks, and they begin to starve. When people starve, they weaken -- and disease strikes more easily. Corpses turn up along the roads and trails. Refugee camps in the region overflow with those fortunate enough to survive the death march. Then the militias and bandits attack and loot the refugee camps.

That's the evil plan. And up to now it's worked, despite the peace agreement of May 2006 that supposedly brought Darfur rebels a means of reaching a political accommodation with Khartoum.

Oil and weapons are the main reasons that plan has been successful. In 2006, Sudan produced approximately 320,000 barrels a day. China bought 30 percent of that production; Japan 38 percent. Sudan also buys weapons from China. China wields a veto in the U.N. Security Council, and Sudan thought its oil sales and weapons purchases ensured a high degree of Chinese protection from U.N. threats to put a large peacekeeping force into Darfur. Khartoum regards delay as a victory. Delay long enough, and the rebels will either die or be driven off the land.

Three converging, long-term efforts are putting unexpected pressure on the Sudanese government, however. Individually, they are not decisive -- but in combination they are creating political and economic problems for Khartoum.

Sudan is losing the war of words and images.

Another information campaign has created a "Chinese problem" for Sudan. Though Hollywood hand-wringing over social evil usually serves publicity-hungry stars more than the victims, it inevitably grabs headlines. In the case of Darfur, celebrity activists have hit a celebrity target: the 2008 Beijing Olympics. China values its Olympic opportunity, perhaps more than it needs Sudanese oil. Movie celebs advocate an Olympic boycott unless China supports a U.N. peacekeeping force and place diplomatic pressure on Khartoum. The celebs also advocate boycotts of private corporations and investors doing business with Sudan. Corporations are far more vulnerable to economic sanctions than sovereign governments.

A "South Sudan" political opportunity is emerging as a competitor but also an ally of Khartoum. That's a curious -- but a politically encouraging -- combination. Here's why: The 2005 peace agreement in South Sudan gave the south a high degree of autonomy. South Sudan has offered to broker negotiations between Darfur rebels and Khartoum. These negotiations are potentially a "win-win-win" political outcome for Khartoum, Darfur and the south, but Khartoum would have to offer Darfur an autonomy deal similar to that of South Sudan.

The third ongoing effort is the United Nations' "phased" peacekeeping plan. The plan is being implemented, slowly adding U.N. personnel and equipment to the outgunned African Union force currently in Darfur. The United Nations' ultimate goal is a "hybrid" peacekeeping operation, with a strike force manned by highly competent soldiers and supported by helicopters and aircraft providing the core of a larger multinational effort.

Khartoum calls the U.N. plan a "Western imperialist invasion." That means the Sudanese government fears its presence will halt the genocide.

These developments are not a recipe for instant peace. They do represent political, economic and military power being slowly brought to bear, with the intent of stopping mass murder.