A Quiet Step Forward for the Rule of Law 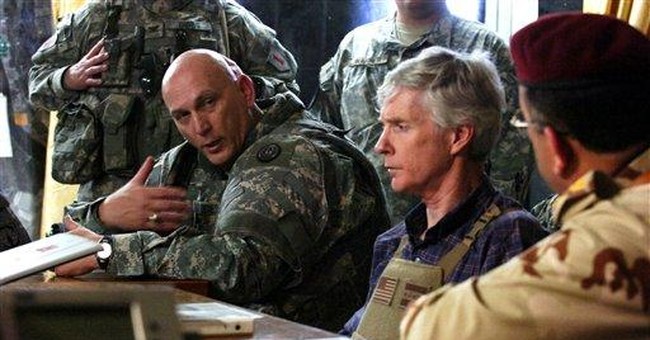 He's prepared for the job. Martins' military career began with a tour leading an airborne infantry platoon. His resume is a record of demanding military law assignments, including a stint in the chairman of the joint chiefs office. His academic record speaks volumes: first in order of general merit in his class at West Point, Rhodes Scholar with first class honors at Oxford, Harvard Law School and Law Review.

Military lawyers, of course, have "service unique" legal tasks. In the War on Terror, they often must advise senior commanders on the legal ramifications of attacking certain types of targets. That's a complicated job in a complicated theater of war.

However, Martins, his staff and civilian legal personnel serving with other U.S. agencies in Iraq have an even more complex and, in my view, more critical assignment. These legal experts are helping Iraq's nascent democratic government implement the Rule of Law.

Replacing the violent whims of ideological, theocratic or tribal tyrants and terrorists with democratic law is a slow, frustratingly incremental process, but nevertheless a strategically essential and potentially decisive endeavor if peace, justice and genuine security are your goals.

In a phone interview from Baghdad, Martins told me that in his estimation the Iraqi government made a small but significant step on April 2, when the Iraqi judiciary opened criminal trial proceedings in its new Rule of Law Complex in Baghdad.

The new facility itself is a compound in Baghdad's Resafa district that co-locates investigation and judicial operations. It is certainly a target for terrorists and fascist thugs because the murderers understand its physical existence represents precisely the kind of systemic change that will ultimately defeat them. Because it is a target, Iraq's ministries of interior and justice have devoted extensive resources to securing the Rule of Law Complex.

Martins wanted to address the specifics of the complex's first criminal proceedings. There were two men brought into the investigative court, "an alleged Sunni al-Qaida operative and a Shia police officer," Martins said. "Both had proceedings initiated for crimes again the Iraqi people. The al-Qaida operative was accused of killing scores of people, and the police officer accused of abusing detainees in his custody."

The Sunni terrorist accused of mass murder (likely of Shia Arabs) and the Shia cop nabbed for abuse and torture (likely of Sunnis) are, of course, symbolic of Iraq's sectarian strife. They are more than mere symbols, however. They are dreadful men who have committed vicious crimes.

Martins did not want to oversell the judicial proceeding. "I've got to look at results on the ground and not get exuberant. This (proceeding) was just an investigation and a first couple of cases. It's still the early days (in this process). That's why I'm taking a measured approach."

But I pushed him: This is Iraq, Colonel, Islam's tectonic collision of Shia and Sunni. Four years ago, one of the world's most vicious dictators was still in charge. He preyed on ethnic and religious differences and ran a prison state in the Stalinist mold.

"You've got to give the Iraqis their due," Martins replied. "The Rule of Law works in little steps, often methodical. Those steps are calm and deliberate when applied. I think as a lawyer it is dramatic, a small step that provides hope that Iraqis can reject the politics of revenge."

So then it's really significant, isn't it, Colonel? Instead of tribal or sectarian revenge slayings -- more bodies in the morgue -- they've begun the process of systemic change.

"It is a step forward," Martins agreed. "The Iraqi government made a step toward reconciliation by rejecting revenge -- submitting these two alleged criminals to a court."

No, the two criminal proceedings didn't get sensational headlines.

But they should have.