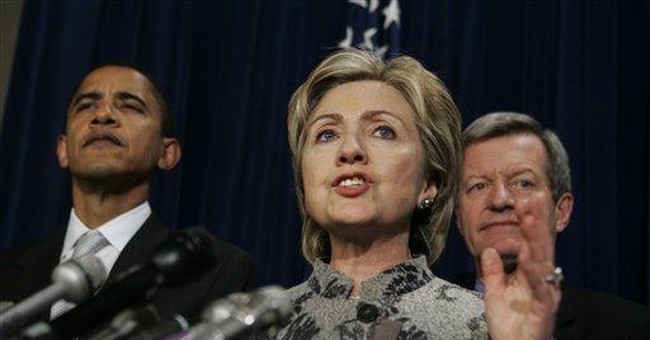 When Equal Pay Day arrived on April 24, I decided to ignore it and let feminists complain about the nonexistent “pay gap” without comment from me. But, after two weeks of media laments and promises by Democratic presidential nominees to promote “paycheck equity,” I came to a startling realization: people actually took this day seriously.

The premise behind Equal Pay Day is that women only earn 77 cents for every dollar that men make and that the reason for the disparity is sex discrimination. This theory is both extremely pervasive and demonstrably false. Evidence of a “pay gap” is only produced by faulty research methods that ignore the fact that men and women make different choices about education, work, and family.

First, the belief that employers get away with paying women 77 percent of what men make can only be explained by a lack of understanding of basic economic principles. If it were true, money-grubbing employers would hire only women, since it would lower costs and increase profits. We know that doesn’t happen, so feminists have invented a preposterous explanation: male businessmen care so much about keeping women “in their place” that they’re willing to lose money by hiring men. Is it just me, or do people like Donald Trump seem slightly more concerned with getting rich than maintaining patriarchy? Already, the pay gap theory has serious flaws.

Second, the 77 cents to the dollar figure is calculated by comparing the average salaries of all men to all women. It does not account for occupation, education, the number of hours worked, or the different roles that jobs play in men’s and women’s lives. The average woman earns less because she’s made different choices in life – a fact that feminists, despite all their caterwauling about the importance of “choice,” refuse to accept.

What women’s studies majors who lament about the pay gap don’t realize is that they’re contributing to it. According to economist June O’Neill, a major reason women make less than men is that they often choose college majors in lower-paying “humanities” fields, such as education, journalism, English and social work, while men are more attracted to high-paying fields like business and engineering. If women’s studies majors are so outraged by the pay gap, maybe they should all drop out and enroll in the College of Engineering. That act alone would do much more to close the pay gap than blaming sexism.

After graduation, men and women often have different work priorities. Warren Farrell, a male feminist and former board member of the National Organization for Women, conducted years of research for his book, Why Men Earn More. He found that men were the vast majority of employees working more than 55 hours a week, were more willing to move frequently for work, and were more likely to stick with a well-paying job they hated. Women, on the other hand, tended to value things like flexibility and personal fulfillment over higher pay.

Many women also take time off to stay home with children, causing them to miss out on experience and promotions. This might bother feminists, but Farrell found that most mothers viewed the trade-off as worthwhile.

Meanwhile, no significant study has ever found that women with the same education and experience, who work the same number of hours, earn less than their male colleagues. Both O’Neill and Farrell identified several jobs where women actually out-earn men.

In a column last month, writer Carrie Lukas summed up the factors behind the pay gap. “In truth, I'm the cause of the wage gap,” she wrote. “Throughout my career, I've made things other than money a priority. I chose to work in the nonprofit world because I find it fulfilling. I sought out a specialty and employer that seemed best suited to balancing my work and family life. I'm not making as much money as I could, but I'm compensated by having the best working arrangement I could hope for.”

In every study conducted by a person not beholden to the feminist agenda, the gender pay gap is more a matter of women’s preferences than systematic sexism. If feminists are really concerned with ensuring women “freedom of choice,” why can’t they accept the fact that women don’t always want the exact same things men do?