The Media's Trial of the Duke Lacrosse Players 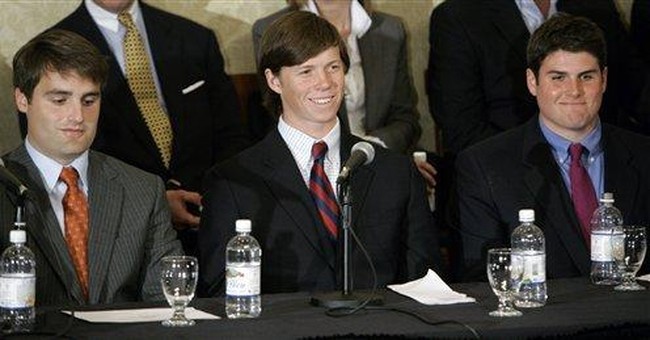 So where do the Duke University lacrosse players go to get their time, money and reputations back? More than a year after an African-American stripper accused three white team members of gang-raping her at a party, North Carolina Attorney General Roy Cooper apologized to the defendants last Wednesday, declaring them "innocent" and victims of "a tragic rush to accuse."

Of course, the apology came many months too late. The moment the scandal broke, the Duke lacrosse players were condemned by the media, the Duke faculty, and the usual cast of racial grievance-mongers, including the Reverends Jesse Jackson and Al Sharpton. The presumption of guilt was based not on actual evidence in the case, but on hateful assumptions that white male athletes are violent racists who take pleasure in gang-raping helpless women.

The self-appointed jury didn't particularly care that evidence indicated the lacrosse players were innocent. It didn't matter that, according to a Sept. 13, 2006 New York Times article, the nurse who examined the accuser found no evidence of vaginal injury or forced penetration. It didn't matter that 46 white members of the lacrosse team immediately submitted DNA samples to the state – and that precisely none of their DNA was found on the accuser (although she did have semen from several other men in her reproductive tract, creating doubts about her claim that she hadn't had sex with anyone in the preceding week). And it certainly didn't matter that many of the men had solid alibis, such as ATM receipts proving they had not been present at the time of the alleged gang rape.

And yet no effort was spared to smear the lacrosse players as vile criminals. About a month after the incident, 88 Duke faculty members signed a letter stating that they were "listening" to students "who know themselves to be the objects of racism and sexism…regardless of the results of the police investigation." In an e-mail to a team member's mother, Duke professor Houston Baker called the lacrosse players "farm animals" and "scummy white males" – all before the defendants had been tried in a court of law.

Unsurprisingly, the media and local social-justice crusaders joined in, distributing flyers at a Take Back the Night march featuring pictures of the team members below a demand to "come forward." Marchers also carried signs that said, "It's not about what Duke has, but what it lax." USA Today gave march participants a forum to make vicious comments, such as that the lacrosse players belong to a "culture of rape" and "exercise their privilege on the bodies and minds of those of us in their environment," according to a March 30, 2006 article.

In the midst of these hysterical accusations, Duke lacrosse coach Mike Pressler resigned, and the team forfeited the rest of its season. Meanwhile, District Attorney Mike Nifong's case against the team members was unraveling. In addition to the absence of DNA evidence, the stripper changed her story several times, and a colleague who had accompanied her to the team party denied that any crime had occurred.

But the angry mob was undeterred. Duke English professor Cathy N. Davidson defended her signing of the "listening" letter to the Raleigh-Durham News and Observer, claiming that it underscored "the appalling power dynamics of the situation." In other words, Davidson found it acceptable to ruin innocent people's lives with false accusations, as long as the accusations proved a point about racism and sexism in society.

Although criminal charges have been dropped, the lacrosse players are unlikely to recover their reputations any time soon. They will always be known as men who were once accused of rape – no matter how preposterous the charges. One of the defendants, David Evans, said in a 60 Minutes interview that the stripper's accusations had "destroyed everything I worked for in my life."

If a group of black men had been ruthlessly prosecuted for the alleged rape of a white woman under identical circumstances, if elite professors had referred to the defendants as "scummy Negroes," decent people would immediately recognize it as a racist witch hunt. Unfortunately, it appears we're willing to tolerate malicious accusations leveled at "privileged white males." If white men have unlimited power in our society, why can't they protect themselves from prosecution for crimes they didn't commit?