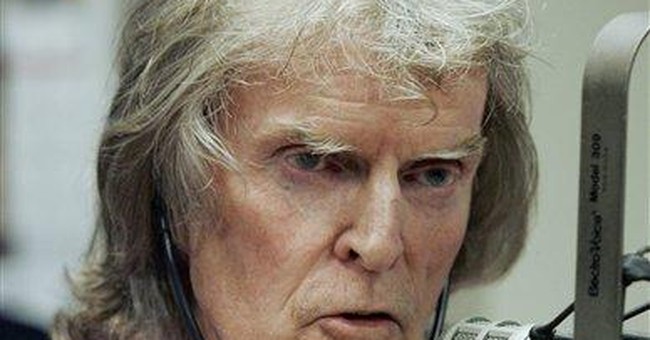 The rap group Three-6 Mafia recently won an Oscar for its dubious lament, "It's Hard out Here for a Pimp." But what their song failed to underscore is that if you happen to be pimping the pathologies of American ghetto sub-culture for material gain, things couldn't look any better. For better or worse, this fact was brilliantly illuminated by the backlash over Don Imus' despicable comments about the Rutgers University women's basketball team. Now that CBS has decided to terminate Don Imus's appearances on its network and not simulcast his syndicated radio show, many in the black community feel they have been vindicated. But in truth the exploitation never even skipped a beat.

First in line to make a buck are the recording industry and network pimps like BET, pimping ghetto culture to make a buck. Pick a random hour of programming, and you will find language and images depicting some of the worst aspects of human nature imaginable. So powerful is this programming, that the most vulnerable among the viewers eventually become conditioned to believe that they are in fact the hos, bitc–s, ni–as and gangstas they see depicted on the screen.

Meanwhile, behind the scenes, major record labels and their executive companies are laughing all the way to the bank. Their artists enjoy celebrity status, garnering glowing reviews in the Washington Post and New York Times, who never even mention the fact their songs denigrate women and minorities.

A little farther back in the line you will find the talent pimps, including the promoters, actors, rappers and other entertainers who've chosen to use their creative talents to influence teenagers negatively with their increasingly violent and disrespectful attitudes about women and their promotion of sexual promiscuity and aggression, rape, and physical abuse against women. Of course, we're not speaking here of the rap artists that communicate opportunities for advancement and real self-esteem as a matter of survival. No, we speak of those rappers who tell our young through their music that violence, illiteracy, fornication, profanity and drug use is cool. And when things get too hot in the hood from all the kids that have started to believe and act out the gangster fantasies they see presented to them, these artists forsake their street credibility and run away to the suburbs where they raise their families in upper middle-class splendor.

If Imus is condemned and terminated from the public airwaves for his distasteful and offensive language, don't his entertainment industry colleagues, who consistently and without conscience refer to women as hos, bitc–s, and the N-word, deserve at least some censure? Of course the irony of all this is that it goes unnoticed by black leaders too busy scrounging for scraps of the spotlight left over by the media feeding frenzy surrounding the Imus story to even notice. Forget the full plate of real issues they left at home in the black community. Forget about addressing the real issues self-improvement and personal transformation that the black community desperately needs to hear from its leaders. No, that sounds too much like real work. It's much easier, in their minds, to find some white racist and hang the problems of the black community on him.

Let's face it, the firing of Imus was a mistake for both CBS and the general population at large. By caving in to the lynch mob mentality, CBS forfeited their opportunity to use Imus's mistake as a catalyst for change and turn it into a positive. By firing Imus and wiping their hands clean of the situation they certainly eased their public relations burden, but they did not do anything to further the cause of equality in America.

This situation reminds me of the Janet Jackson / Justin Timberlake breast-baring controversy from the Super Bowl Halftime Show a few years ago. The public went berserk, the FCC stepped in, fines were levied, and everybody had an opinion. But then a week or two later, you couldn't hear the faintest whisper about the way women are dressing on television, or the way men are portrayed as treating women in music videos, or the profusion of sex on the internet.

There is no question that Imus's words were racist and hateful. They were disgusting, and I for one will never forget what he said. But I will forgive him and move on, just as the women from Rutgers did. The team, after meeting personally with Imus, voted to forgive Imus. Although their coach, C. Vivian Stringer, admitted they will never forget the comments, they are in the process of forgiving. As CBS should have done, Stringer then brought the issue into a much broader context. She said, "It is not just Mr. Imus, and we hope that this will be and serve as a catalyst for change."

The change that Ms. Stringer is talking about is the key to this whole thing. If Imus's comments simply turn into another media fiasco, than we'll have done nothing to improve the conditions of our society. If, on the other hand, the public uses this situation as an opportunity for cultural improvement instead of mere revenge, than it will be made good.