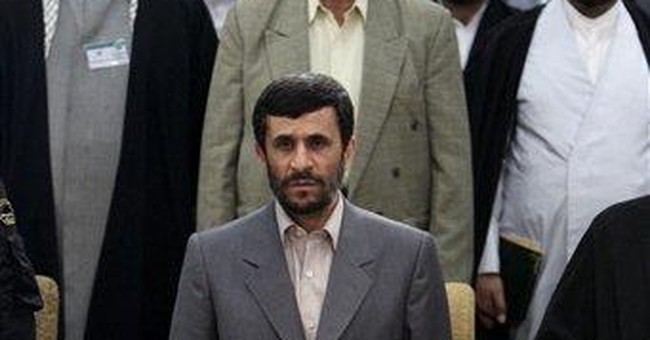 All the rage these days is that Iran could be the next Iraq. We continually hear frightening stories about their nuclear arms build up, their potentially dangerous leader, President Mahmoud Ahmadinejad, their freedom-less (read un-democratic) society, and their support against American soldiers and officials in Iraq. We often hear American leaders declare them dangerous, and potentially disastrous if they develop a nuclear bomb. And regardless of the evidence - and rightfully so - we are always wary of Middle Eastern countries that refuse to work with the United Nations Security Council and consistently isolate themselves from the international community. So it’s easy to wonder and interesting to argue if Iran could be the second country attacked under

Iran, officially the Islamic Republic of Iran, plays an absolutely crucial role in the stability of the Middle East. Because of its prime central location in Eurasia, six thousand years of history, large supply of petroleum, vast amount of territory, and 70 million plus residents, Iran wields an ungodly amount of influence in the region. The world would be rocked (perhaps literally) if Iran goes from lonely boy to raging bully. And most experts fear that without intervention from the international community, this Islamic republic is headed down that path.

Thomas Friedman, the bestselling author and popular columnist at the New York Times, recently suggested that Iran and the United States should become “strange bedfellows.” Friedman argues – and I wholeheartedly agree – that if Saudi Arabia can be an ally, then so can Iran. Friedman went on to say – and I wholeheartedly agree again – that the first order of business is to initiate negotiations, despite Iran continuing their nuclear program.

Negotiations with Iran will serve several purposes. First and foremost, it will prevent any chance of war; and a war with Iran is the last thing the US needs right now. And second, it will reduce the isolationist attitude that Iran has grown fond of. Reducing their isolation will bring about several positive changes, including better weapons monitoring, controlled nuclear proliferation, stable(r) oil rates, and less animosity towards the US and the international community. And heck, even if the immediate affects of negotiations yields none of these potential positives, at least we are communicating with them. If we learned anything from the Cold War, it’s that talking with our enemy is the best bet to avoid conflict.

Last week in this space I sang the praises of Condoleezza Rice and her career work here and abroad. This week, however, she made a mistake by falling in line with the conservative hard-liners in the Bush cabinet who oppose all negotiations with Iran until they completely halt their nuclear program – a program, mind you that they claim is only for civilian nuclear power. Rice said, "I am prepared to meet my counterpart or an Iranian representative at any time if Iran will suspend its enrichment and reprocessing activities. That should be a clear signal.” Yes, it is a clear signal, but it’s the wrong one. Asking Iran to halt its nuclear program before negotiations begin is like telling someone to wash their hands before they shower. It just isn’t necessary.

A senior Iranian government official recently told Christiane Amanpour of CNN that the time is right for the US and Iran to sit down and talk directly and “recognize each other.” The official argued that Iran and the US are now natural allies because the biggest threat to each is al Qaeda. “Natural allies” may be a bit of a stretch, but I agree our interests overlap. The official went on to say that his government is motivated by “peace for the Iranian people.” He explained a bit further, “Peace with security. Peace based on mutual respect, mutual benefit, and mutual security.”

This official’s peace rhetoric seems to go against all of the intelligence coming out of the Middle East. Michael McConnell, the new National Intelligence Director, said this week that senior Iranian leaders are aware that the Iranian Revolutionary Guard's Quds have been arming and training Iraqi extremists. If this is in fact true, then Iran would be indirectly responsible for innumerable deaths of American soldiers. And that would be all but impossible to forgive. Furthermore, Iran’s support of Hamas and Hezbollah has led to greater disruption in Arab states and caused American government officials to further distrust Iran’s senior leadership.

Whether the aforementioned senior Iranian official truly has the clout he claims, or he is merely a renegade, we cannot be sure. But regardless of his sincerity, it’s time to take the first step towards diplomacy with Iran and end this power struggle. I realize the past can be difficult to overcome, but in this case history depends on it.

As this column is going to print, Secretary of State Condoleezza Rice announced in testimony on Capitol Hill that the US has agreed to join high-level talks with Iran and Syria on the future of Iraq. This is a sudden change in policy that opens the door to diplomatic dealings the White House has ignored in recent months. This move occurred after Iraq invited neighboring states, the United States and other nations to a pair of regional conferences. Interestingly, the Iraq Study Group, whose recommendations were disregarded by the administration, had recommended such a regional meeting in its December report. Rice emphasized, however, that these conferences would be led and organized by the Iraqi government and not by the United States, as the report recommended. The fact that the administration is now showing some consistency with the Iraq Study Group is a plus. We must await the outcome.

Tucker Carlson Zeroes In on the Left's 'Biggest Fear'
Townhall
'Cringe hall of fame': Watch Speaker Nancy Pelosi declare, 'We do not say open sesame, we say … open Biden'
Twitchy
Kayleigh McEnany Explains Why She Thinks Jen Psaki Always Has to 'Circle Back,' It Says Everything About the Difference in Admins
Redstate
The Morning Briefing: California Is Lost, Getting Rid of Newsom Won't Save It
PJ Media