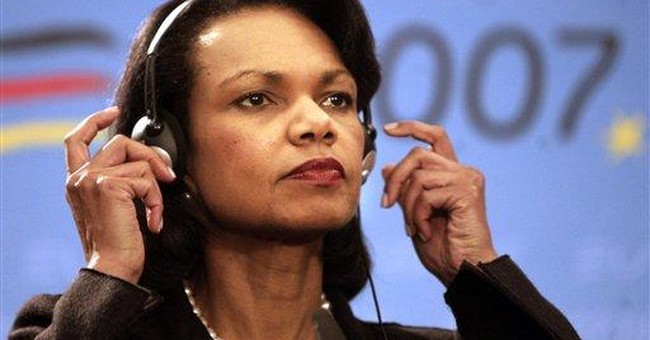 Secretary of State Condoleezza Rice recently held the first of several three-way talks among the United States, Israeli and Palestinian leaders. Although the initial meeting ended with little progress other than a commitment to meet again, the fact that Rice was able to get these country’s leaders talking together in the same room is progress. And though these talks may seem insignificant and long overdue (this is nearly a 60-year-old conflict) year, they in fact are a groundbreaking success for the world. And the person we have to thank for that is our very own Condoleezza Rice.

Born in Birmingham, Alabama in 1954, Rice grew up as an only child in the midst of America’s civil rights struggle. Her father was a Presbyterian minister and high school guidance counselor and her mother was a high school teacher. As Rice recalls of her parents and their friends, "they refused to allow the limits and injustices of their time to limit our horizons.” Although Rice was subject to racism quite frequently, she never allowed her environment to limit her development and progress. And thank goodness for that, because her contributions to this world (thus far) are inspiring.

Rice earned a Bachelor of Arts, Masters Degree, and PhD in Political Science, before beginning her professional career at Stanford University, teaching Political Science. She began as an Assistant Professor and was promoted to Associate Professor, university Provost, and finally full Professor, a title which she continues to hold. In addition to being the first female and first minority to hold the position of Provost at Stanford, Rice was the youngest Provost in Stanford's history. Rice helped Stanford erase a $20 million deficit when others believed it would be impossible. Coit Blacker, Stanford's deputy director of the Institute for International Studies said, “There was a sort of conventional wisdom that said it couldn't be done ... that [the deficit] was structural, that we just had to live with it." Two years later, Rice convened a meeting to announce that not only had the deficit been balanced, but the university was holding a record surplus of over $14.5 million. Her work in academia propelled her to great things in the business and political world.

Besides her abundant business ventures, Rice has collaborated on several books, joined many community groups, been given several honorary degrees, and served as a board member in several prestigious organizations. But her political career is where we’ve really seen Rice shine.

She first worked in the State Department in 1977, during President Jimmy Carter’s administration, as an intern in the Bureau of Educational and Cultural Affairs. Nearly ten years later while an international affairs fellow of the Council on Foreign Relations, Rice served as Special Assistant to the Director of the Joint Chiefs of Staff. From there, her political career took off. She served in President George H.W. Bush's administration as Director, and then Senior Director, of Soviet and East European Affairs in the National Security Council, and a Special Assistant to the President for National Security Affairs. In 2000, she was picked by President George W. Bush to serve as National Security Advisor and in 2004 was named Secretary of State.

Since Rice became Secretary of State in January 2005, she has undertaken several major initiatives to reform and restructure the department, as well as US diplomacy as a whole. Arguably her most substantial initiative has been dubbed "Transformational Diplomacy," a goal which she described as a process to “work with partners around the world to build and sustain democratic, well-governed states that will respond to the needs of their people and conduct themselves responsibly in the international system.” Besides her work restructuring America’s state department, Rice has had great success overseas.

In North Korea, for example, where threats of nuclear proliferation seem ever-present, Rice has kept her cool and continually urged North Korean leaders to actively participate in the six-party talks with the US and five other countries. She also, according to senior administration officials, bypassed layers of government policy review that had prevented a past agreement. In the last two weeks, Rice became “cautiously optimistic that we may be able to begin, again, to implement the joint statement of 2005 toward the denuclearization of the Korean peninsula.” Rice however isn’t without her critics when it comes to North Korea. Hardliners from the right are criticizing Rice’s diplomatic approach, and lawmakers from the left are upset the current deal is similar to one they could have gotten four years ago. Despite the bickering, it will soon become clear that Rice’s approach is the only path to progress in this case. Without her steady hand and head, this sort of agreement would never have been possible with North Korea.

Despite the unsuccessful war in Iraq and the troubled times in Iran, Afghanistan, Israel, Palestine, North Korea, and several other countries, Rice has become the most trusted popular member of the Bush Administration. She is arguably the most talked about, respected, and admired woman in the world. And she is certainly the most powerful woman on the globe today. The road Rice has traveled is an inspiration to all people - American or otherwise.