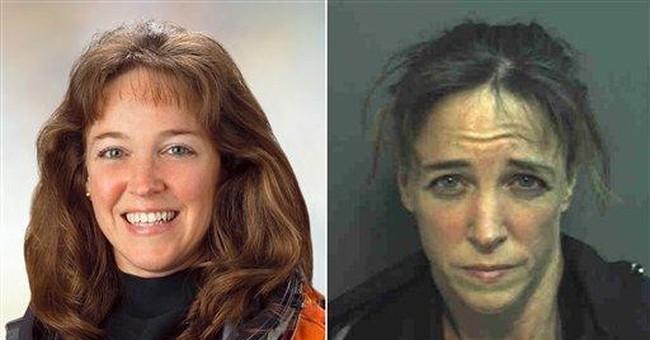 You don’t normally expect a National Aeronautics and Space Administration (NASA) astronaut, captain in the United States Navy, college graduate, and Roman Catholic to fall so hard, so fast. But then again, you also would never suspect an American President to have sex with an intern, a National Basketball Association star to rape a mistress, or a Hall of Fame football player to commit a double murder. Or perhaps, because of the way American society has developed over the last few generations, these types of events are no surprise anymore.

Lisa Nowak, the aforementioned astronaut, was arrested last week in Orlando, Florida on charges of attempted kidnapping, battery, attempted vehicle burglary with battery, and destruction of evidence. After the subsequent arraignment, Nowak was ordered released on $15,500 bail with the condition that she wears a GPS tracking device. Before her release however, Orlando police charged Nowak with attempted first-degree murder and announced she would not be released on bail. After the second arraignment, Nowak was charged with attempted first degree murder with a deadly weapon and released on $25,500 bail. She is currently on leave from NASA and is undergoing psychiatric evaluations under police surveillance. What happened to this woman?

Well, the short explanation is simple. She wanted to kill the woman who her quasi-boyfriend was possibly cheating with. Let me put that in plain English: she went crazy.

The long explanation for her actions is a bit more complicated. Nowak, is (or was) a brilliant woman. Her academic history, her experience with the Navy, and her time with NASA show that she was no less than a true success story. She was well liked amongst her friends, colleagues, church members, and industry peers. Yes, she was divorced, but she had been happily (or seemingly happily) married for nearly twenty years and she and her former husband had three beautiful children together. For Nowak to consider murdering a relationship rival seems inconceivable. Or does it?

Fame and fortune have brought many people to their knees. Whether it’s the power these fallen stars felt entitled, or it was merely their giant egos, we do not know. But we see it over and over again from the rich and famous; drug use, weapon charges, suspected murders, sexual affairs, public fights, drunk driving, and much more. You name the crime or criminal behavior, and there is no doubt that one of America’s icons has been involved in the misdeed. Nowak is simply the latest case of someone falling from the pedestal that we place them on.

Ever since space travel has begun, we have treated America’s astronauts like heroes. Perhaps the star treatment, enormous expectations, and constant scrutiny, was more than she could handle. Although nobody knows exactly what prompted Nowak to drive 900 miles wearing diapers (yes, so she didn’t have to stop for restroom breaks) stalking a potential victim, many experts say the same traits that make astronauts such high achievers can combine to aggravate emotional problems and strained relationships.

"I really believe that NASA goes overboard in promoting how heroic and super all these people are. They themselves have forgotten these are ordinary people and in that kind of celebrity culture, there's a sense of entitlement." said Dr. Patricia Santy, a former NASA psychiatrist and author of the book “Choosing the Right Stuff”.

Fallen stars like Nowak are becoming more and more common in America. Maybe it’s the media, maybe it’s the culture, maybe it’s the family, and maybe it’s the genes. But whatever the reason, criminal behavior from America’s stars is a major problem. Infamous crime is more problematic than general crime, because it garners so much attention. Much of this attention comes in the form of flattery and support, which can be misconstrued as a positive response to an atrocious action. Moreover, whether they get released on bail, fined a few dollars, or suspended from a few games, the punishment for these icons rarely fits the crime. This creates a culture where youngsters believe if and when they get rich and/or famous, they too can act however they want. They believe that a fancy team of lawyers, an endless supply of cash, and constant support from their industry will keep them from ever doing “the time.” A sad cycle of misbehavior begins to exponentially grow. Every time a wealthy or famous person gets away with a crime, another one like them believes they can do the same.

Before the public could completely soak up the Nowak Astronaut saga, Anna Nicole Smith stole the show with her heartbreaking death. What was the fascination with Anna Nicole Smith, you might ask? Americans seem to thrive on the famous that possess outrageous behavior. Anna Nicole Smith gave her public what they wanted: flash– when she upstaged Janet Jackson’s Super Bowl stunt at the MTV Awards by pulling down her dress to reveal both breasts, each covered with the MTV logo; scandal – involving her marriage to J. Howard Marshall, who was 63 years her senior; entertainment – with her reality show and bereavement - over the death of her son Daniel and now her own death. What did Anna Nicole Smith really want? She allegedly stated that she wanted to be the next Marilyn Monroe – did she also know that she would die like Marilyn Monroe? Stay tuned.