Anti-war Protestors: Some Oldies But Not So Goodies 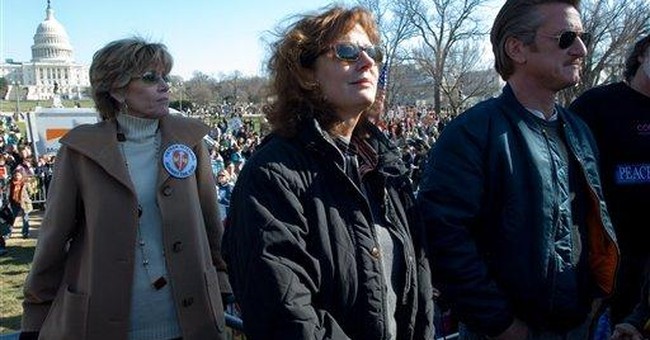 The anti-war rallies last weekend brought out the usual medley of retreads (Jane Fonda, the post-North Vietnamese Communist supporter, post-Turner, post-aerobics; the dynamic duo of Sarandon-Robbins; Sean Penn, the aging enfant terrible of Hollywood who tried to be a human shield for Saddam; Jesse Jackson, who specializes in giving eloquent speeches having no substance or meaning; politicians past their prime looking for some kind of resurrection such as Tom Daschle); the Code Pink leftists; pro-Saddam supporters in America; along with some fresh new 20-somethings; grieving relatives of American soldiers who have died in Iraq; and well-meaning anti-war activists of all kinds.

These demonstrations have become an American product with certain codes and structure that belies any spontaneity the organizers often claim. If anything, the demonstrations resemble most Hollywood productions with a cause (the engagement of American forces overseas; domestic issues rarely merit such expenditure of talent and money), producer (some leftist organization or another), a director (ditto), and roles assigned to major stars, minor stars, and a supporting cast of thousands. How many thousands? Just like in the old Cecil B. DeMille productions, the more “extras” they can muster, the better, especially when policy is often determined by polls (scientific or otherwise) and media exposure.

From the days of the more or less spontaneous events of the Sixties, these get-togethers have established a routine and have become rituals that exist in and of themselves, independent of any meaningful desire for seeing solutions to grave issues and problems facing their country, namely the national security that protects their rights and freedoms here in the United States.

Absent in last weekend’s cycle was any clear identification of the enemy we are fighting in Iraq; what grave geopolitical consequences we face if we pull out now, which was what most of the demonstrators seemed to want (“Go out of Iraq now”); and, natch, any sense of recent history or what has been happening in Iraq in the last few years. As one person was quoted in the Washington Post, “In my view, this is a war of choice and a war for profit against a culture and people we don’t understand.” OK, then what?

Our enemies in the Iraqi battle, if mentioned at all, are lumped under the rubric of the “Iraqis,” or “resistance” or “insurgents.” The fact that in most cases those who are killing and maiming our valiant young troops in Iraq are the same types of people who came here to attack us in 9/11 seems irrelevant to these demonstrators. The fact that they, these same nameless faceless characters, will relentlessly keep attacking us when we leave Iraq is equally irrelevant to the Left in America. The illiberal Left in America is torn between hiding their heads in the sand and trusting others who seem to “know something about Iraq” simply on the basis of Bush-bashing rather on what is good for the country or for the generations to come that will deal with the disastrous situation that will occur if we “Pull Out Now.”

Conservatives lately, and some Republicans, have shown early 2008 election jitters and are accusing the president of waffling and kowtowing to the Democrats or are conversely joining the chorus for Iraqi redeployment (albeit more cautiously than the Democrats). These overtures seem designed to appease the “public” as measured by the polls instead of facing “the” tough question: what happens when we leave Iraq now and the president’s new plan is thwarted by Congress? Possible ethnic cleansing that could inevitably lead to calls for humanitarian intervention by the same liberals that made us leave in the first place. Or what about the real truth, Iraq as a stronghold for al Qaeda, Iranian terrorists and proxies in a country home to a major chunk of the world’s oil reserves.

America’s good fortune is that there is one commander in chief who is setting forth sensible policy despite the “well-meaning” politicians who are positioning themselves for popularity contests rather than truly engaging in one of the most threatening battles the United States has ever fought.

Despite the many mistakes made in Iraq to date, we have a president who knows that the only option for the ongoing battle on terrorism, including as it is being played out on Iraqi soil, is victory as defined by the total elimination of another haven for global terrorism. And even that is but one step in the war against those who are bent on a single-minded fanatic goal—destroying the Western way of life, including a democracy that allows such anti-war marches as part of our inalienable rights.