Stumper: Should Trump Mention His Most Popular Issue?

Ann Coulter
|
Posted: Oct 21, 2020 6:22 PM
The opinions expressed by columnists are their own and do not necessarily represent the views of Townhall.com. 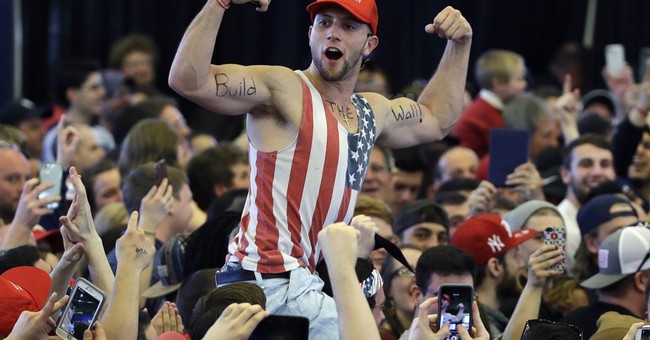 In 2015, Donald J. Trump decided he was going to run for president on popular ideas. This was a stunning, historic breakthrough in American politics. He made his announcement in a speech talking about Mexican rapists, pledging to deport illegal aliens and build a wall. And the rest is history.

I’m thinking he should try it again this Thursday night.

But that’s not what the crowds chanted. They certainly weren’t chanting “Reform Social Security!” or “Protect Ukraine’s national sovereignty!” No, the slogan that inspired a million T-shirts, chalk etchings, replicas and hashtags was: Build the wall!

Month after month, at every rally, whenever Trump mentioned the wall, the crowds went wild. It was Trump’s one surefire standing ovation, his “Free Bird” at a Lynyrd Skynyrd concert. Even before Trump would take the stage, his supporters would start the chant: “BUILD THE WALL!”

Before the 2016 Iowa caucuses, Daily Beast columnist Michael Moynihan tweeted: “Talked to lots of Trump supporters in Iowa. When I pointed out he wasn’t a conservative, all had same answer: ‘So? The wall!’”

Naturally, the media reacted as if Trump had called for gas chambers. But that just made him look like a brave truth-teller. The media furrowed their brows and explained that Trump was “riding a wave of anger against Washington.” He was appealing to “this very visceral, very angry populist working-class blue-collar worker.”

So it was furious boiling anger. On the other hand, if it was just trash talk the voters yearned for, why did New Jersey Gov. Chris Christie sink like a rock?

Political analysts kept droning on and on about Trump’s mysterious appeal, but in all their prolix analyses, I can’t find a single one saying, BOY, WERE WE WRONG ABOUT IMMIGRATION!

Even the so-called “Muslim ban” — vilified by the media — helped Trump. Why were we admitting people to our country who would turn around and shoot up the San Bernardino Inland Regional Center?

Back then, Trump’s attacks on the media were premised on policy — not their personal attacks on him. That’s why his supporters would never desert him, even as he was libeled from every media outlet every minute of every day.

The media claimed Trump’s popularity was just a cult of personality, but the one thing most voters weren’t wild about was his personality. Unfortunately, Trump may be the only person who actually believes the fake news on this. He seems to think that what drove him to a stunning upset victory in 2016 was that the public just adores the big lunk!

Rough estimate of topics in the typical Trump campaign speech, 2020:

20 minutes: His experience with COVID — he’s better than ever!

20 minutes: Brags about his crowd size and how his fans LOVE him (they never loved Reagan like this!)

Mass immigration is a huge boon for Democrats. It gives them lots of new voters. That’s immigrants’ primary skill: voting. We’ve become the country feared by John C. Calhoun, divided into people who work for a living and people who vote for a living.

Not only do Democrats need the votes, but their blind hatred of Everything Trump, means they are wedded to this ridiculously unpopular policy.

I have an idea! Why not make Biden talk about it?

New York magazine’s Andrew Sullivan (now on his own) and The New York Times’ Thomas Friedman and Frank Bruni — liberals all! — have begged the Democrats to drop the open borders nonsense. Even Mother Jones’ Kevin Drum wrote in astonishment last year that he couldn’t “see much daylight” between the Democrats’ ideas on immigration and “de facto open borders.”

“I was shocked that so many were ready to decriminalize illegal entry into our country. I think people should have to ring the doorbell before they enter my house or my country.

“I was shocked at all those hands raised in support of providing comprehensive health coverage to undocumented immigrants. I think promises we’ve made to our fellow Americans should take priority, like to veterans in need of better health care.”

The media had a grand time calling Trump’s immigration policies “racist,” but unfortunately for them, Trump’s policies were popular with all kinds of voters. It wasn’t just “angry white men” who were losing their jobs and neighborhoods (and sometimes their lives) to immigrants. So were black people. So were Hispanics. So were teenagers. So were — well, to be fair, Asians were more likely to be the ones taking those jobs.

As Sullivan wrote: “[For Democrats, there are] no negatives to mass immigration at all, and no concern for existing American citizens’ interests in not having their wages suppressed through this competition.”

That’s probably why we don’t hear so much about Trump’s immigration policies being racist anymore. Now, it’s just the never-ending demand that Trump condemn “white supremacy.”

(Speaking of which, the debate this Thursday presents a golden opportunity to ask Trump the central question of this campaign. There’s a section on “Race,” and I think something along the lines of “Do you support white supremacy?” fits quite well under that rubric. Maybe — just maybe – we will finally get an answer to that question. Because let’s just admit it: If they don’t ask this time, they’re never gonna.)

If you want to know how Trump could shoot someone on Fifth Avenue in 2016 and not lose a single vote, look no further than his proposals on immigration.

It’s one thing to push an unpopular idea. The GOP does that all the time: the Trans-Pacific Partnership — how about the Iraq War?

How many people supported moving our embassy to Jerusalem? (Answer:36%.)

How many supported Bush’s plan to privatize Social Security? (Answer: 25%.)

How many thought immigration levels should be decreased or stay the same? (Answer: 75%.)

How many supported mass deportation of all illegal immigrants? (Answer: 54%.)

Trump’s genius was that he was pushing policies that were popular. Maybe he should try it again at this Thursday’s debate.