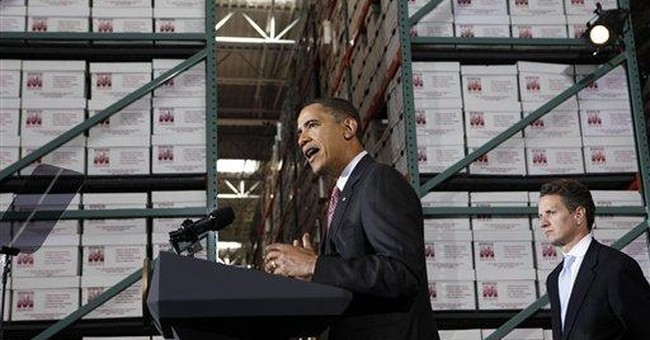 The Obama administration has attacked Fox News in order to prevent government corruption stories broken on Fox from bleeding into the other media, which are all-consumed with daily updates on Levi Johnston's Playgirl spread and Carrie Prejean's breast implants.

That's understandable. But I think the administration should have picked someone other than David Axelrod to deliver the claim that Fox News is "not really news," inasmuch as Axelrod was behind the leak of scurrilous allegations in Jack Ryan's sealed divorce papers when he was running for a Senate seat against Obama. Talk about vicious personal gossip.

Now that Fox has been branded an untouchable, the teacher's-pet media are jubilant.

In Newsweek, Jacob Weisberg wrote a column saying liberals should refuse to appear on Fox News, pointedly concluding, "And no, I don't want to come on 'The O'Reilly Factor' to discuss it." Considering that Weisberg is a 107-pound weasel with a speech impediment, this is on the order of Weisberg's announcing that he's not interested in appearing in the next "Ocean's Eleven" movie with George Clooney.

The strangest thing about all the invective against Fox is that it is happening in a world that contains MSNBC. At least Fox News primetime hosts, and many of their guests, know something about politics. MSNBC's primetime lineup presents an array of people who sound like earnest college kids who just walked up to a Common Cause table, and the sum-total of what they know about politics is what they read in the brochures.

In the past week, both Chris Matthews and Keith Olbermann have rolled out the Willie Horton ad, claiming that it marked the beginning of vicious personal attacks in politics, as opposed to what it was: The most devastatingly relevant campaign commercial in all of American history.

You can always astonish college kids by telling them the true story of Willie Horton. Among the jaw-dropping facts are:

In the '80s, the Massachusetts Supreme Court ruled that a prison furlough policy had to be extended to convicted murderers, who were ineligible for parole.

Even the Massachusetts Legislature, which contained about three Republicans, realized this was insane, and quickly passed a bill excluding first-degree murderers from the weekend furlough program. But in a desperate bid for the ACLU's Brain-Dead Liberal of the Year Award, Gov. Michael Dukakis vetoed the bill.

Horton, who was later released under this program, was in prison for carving up a teenager at a gas station and then stuffing his body into a garbage can. (He had already been convicted of attempted murder in South Carolina -- through no fault of his own, the victim survived.)

Even after Horton used his Dukakis-granted furlough to rape and torture a Maryland couple in their home for 12 straight hours, the Greek homunculus issued a statement reaffirming his strong support for furloughing murderers.

The Bush campaign commercial about Dukakis' furlough program never showed a picture of Horton. In fact, the actors playing "criminals" passing through a revolving door in the ad were all white.

Voters considered it relevant that a candidate for president was so beholden to the ACLU that he backed an idiotic furlough program that released first-degree murderers.

Every informed student of the 1988 campaign knows that the Bush ad didn't show Horton's picture. And yet in Keith's discussion of Bush's allegedly vile, racist use of Willie Horton, he used a phony version of the ad, doctored to include a photo of Horton.

I don't blame Keith personally for this blatant distortion: He gets all his research material from Markos Moulitsas and other left-wing bloggers, so he can't be held responsible for the content of his show. Keith's principle contribution to the program is his nightly display of self-congratulation and pompous douche-baggery.

Remember, Keith, like his MSNBC colleague Contessa Brewer, majored in "communications" in college, not a research-related field, such as political science. In his coursework, he learned such skills as: Dramatically Turning to Camera, Hysterical Self-Righteousness, Pausing Portentously and Gravely Demanding Apologies/Resignations From Various Public Figures.

Given this background, it's understandable that Keith will make errors. As viewers witnessed recently, he can't even pronounce the name of prominent American economist and philosopher, Thomas Sowell. (Although he did spend three weeks at a Berlitz course in Arabic honing his pronunciation of "Abu Ghraib" to razor-sharp prissiness.)

But here's the fly in the ointment: Keith has once again been victimized by left-wing blogs into thinking that the 1988 Bush ad showed Willie Horton's picture, when in fact, Horton's race was deliberately scrubbed from the ad.