Are 'Hope' and 'Change' Still Tax-Deductible? 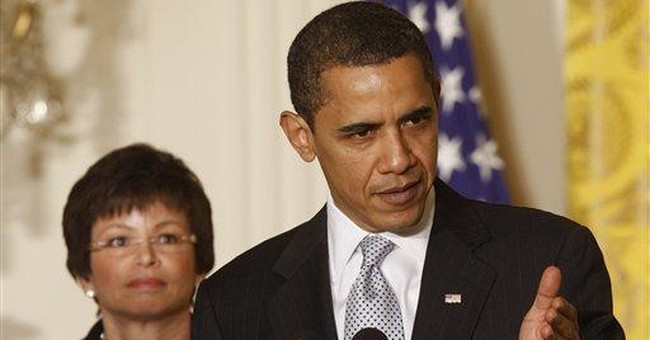 Are you sitting down? Obama plans to pay for his $3.6 trillion-dollar spending bill by raising taxes on "the rich." I know, I know ... I was pretty shocked, too.

The bad news is, by hiking taxes in a recession, Obama will turn a disaster into a catastrophe. But there's good news, too. The "rich" include most of Obama's biggest supporters.

While liberals love being praised for their looks, their style, their brilliance and their courage, the one quality they don't want talked about is their money. To the contrary, Democrats are constantly boasting about how poor they are -- as if that's a virtue in a capitalist society with no class barriers.

No matter how much money they have, liberals will be damned if they're giving up the poor's mantle of angry self-righteousness. This is especially true if their wealth came by inheritance, marriage or the taxpayer, the preferred sources of income for Liberalus Americanus.

Democrats' claims of poverty merely serve to show how out of touch elected Democrats are with actual incomes in America.

At the Democratic National Convention, for example, there were heartfelt tributes to the daunting self-sacrifice of both Barack and Michelle Obama for passing up lucrative jobs to work in "public service" -- which apparently is now defined, such as in Michelle Obama's case, as "working as a 'diversity coordinator' at a big city hospital for $300,000 a year."

Seriously, even with a company car, full medical benefits and six weeks' paid vacation thrown in, how do people live on that?

Meanwhile, the average salary for a lawyer with 20 years or more experience in the U.S. is a little more than $100,000. If Michelle Obama doesn't lay off all this "giving back" stuff pretty soon, she's going to find herself in Warren Buffett's tax bracket.

During the campaign, Joe Biden was also praised by the Democrats for being the poorest U.S. senator -- as if that were a major accomplishment.

Howard Dean, chairman of the Democratic National Committee, touted Biden as "a good example of a working-class kid," adding that, to this day, Biden was "one of the least wealthy members of the U.S. Senate." Only a Democrat would list "never really made anything of myself" on his resume.

On the Huffington Post, operated by a woman who acquired her wealth by marrying a rich gay guy connected to Big Oil, liberal blogger Steven Clemons gloated that, unlike John McCain, Biden wouldn't "forget the number of houses he owns," adding that, in 2006, Biden was ranked the poorest U.S. senator.

And at his high school reunion Biden was voted "most likely to try to bum a ride off of somebody." Vote Biden!

This, my friends, is the face of poverty in America. At least in the Democratic Party. It's located just below that row of hair plugs. The Bidens are yet another heart-rending example of America's "hidden poor" -- desperately needy families hidden behind annual incomes of a quarter million dollars or more paid by the taxpayer. My fellow Americans, we can do better.

If liberals are going to show how in touch they are with normal Americans by demanding a Marxist revolution against the rich every time they control the government, how about taking a peek at the charitable giving of these champions of the little guy?

No wonder Obama doesn't see what the big fuss is over his decision to limit tax deductions for charitable giving. At least that part of Obama's tax plan won't affect his supporters.

That same year, the heartless Halliburton employee Vice President Dick Cheney gave 77 percent of his income to charity. The following year, in 2006, Bush gave more to charity than Obama on an income one-third smaller than Obama's. Maybe when Obama talks about "change" he's referring to his charitable contributions.

Liberals have no intention of actually parting with any of their own wealth or lifting a finger to help the poor. That's for other people to do with what's left of their incomes after the government has taken its increasingly large cut.

As the great liberal intellectual Bertrand Russell explained while scoffing at the idea that he would give his money to charity: "I'm afraid you've got it wrong. (We) are socialists. We don't pretend to be Christians."