The Reign of Lame Falls Mainly on McCain 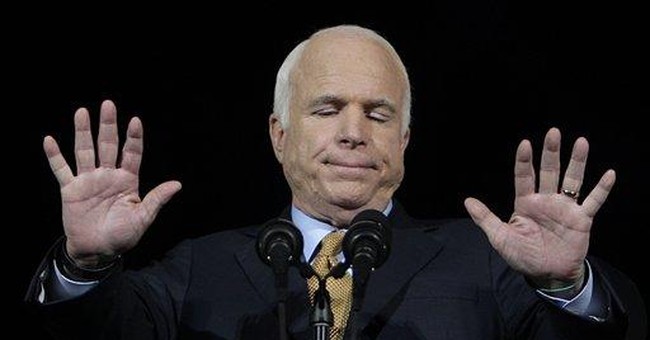 Last night was truly a historic occasion: For only the second time in her adult life, Michelle Obama was proud of her country!

The big loser of this election is Colin Powell, whose last-minute endorsement of Obama put the Illinois senator over the top. Powell was probably at home last night, yelling at his TV, "Are you KIDDING me? That endorsement was sarcastic!"

The winner, of course, is Obama, who must be excited because now he can start hanging out in public with Bill Ayers and Rev. Jeremiah Wright again. John McCain is a winner because he can resume buying more houses.

And we're all winners because we will never again have to hear McCain say, "my friends."

After Bill Clinton won the 1992 presidential election, Hillary Clinton immediately announced that, henceforth, she would be known as "Hillary Rodham Clinton." So maybe Obama can now become B. Hussein Obama, his rightful name.

This was such an enormous Democratic year that even John Murtha won his congressional seat in Pennsylvania after calling his constituents racists. It turns out they're not racists -- they're retards. Question: What exactly would one have to say to alienate Pennsylvanians? That Joe Paterno should retire?

Apparently Florida voters didn't mind Obama's palling around with Palestinian activist Rashid Khalidi and Nation of Islam leader Louis Farrakhan, either. There must be a whole bunch of retired Pennsylvania Jews down there.

Have you ever noticed that whenever Democrats lose presidential elections, they always blame it on the personal qualities of their candidate? Kerry was a dork, Gore was a stiff, Dukakis was a bloodless android, Mondale was a sad sack.

This blame-the-messenger thesis allows Democrats to conclude that their message was fine -- nothing should be changed! The American people are clamoring for higher taxes, big government, a defeatist foreign policy, gay marriage, the whole magilla. It was just this particular candidate's personality.

Republicans lost this presidential election, and I don't blame the messenger; I blame the message. How could Republicans go after B. Hussein Obama (as he is now known) on planning to bankrupt the coal companies when McCain supports the exact same cap and trade policies and earnestly believes in global warming?

How could we go after Obama for his illegal alien aunt and for supporting driver's licenses for illegal aliens when McCain fanatically pushed amnesty along with his good friend Teddy Kennedy?

How could we go after Obama for Jeremiah Wright when McCain denounced any Republicans who did so?

How could we go after Obama for planning to hike taxes on the "rich," when McCain was the only Republican to vote against both of Bush's tax cuts on the grounds that they were tax cuts for the rich?

And why should Republican activists slave away working for McCain when he has personally, viciously attacked: John O'Neill and the Swift Boat Veterans, National Right to Life director Doug Johnson, evangelical pastors Jerry Falwell, Pat Robertson and John Hagee, various conservative talk radio hosts, the Tennessee Republican Party and on and on and on?

As liberal Democrat E.J. Dionne Jr. exuded about McCain in The Washington Post during the Republican primaries, "John McCain is feared by Democrats and liked by independents." Dionne proclaimed that McCain "may be the one Republican who can rescue his party from the undertow of the Bush years."

Roll that phrase around a bit -- "liberated from Mr. Reagan's coattails." This is why it takes so long to read the Times -- you have to keep reading the same paragraph over again to see if you missed a word.

Bush, of course, rode Reagan's ultraconservative coattails to victory, then snipped those coattails by raising taxes and was soundly defeated four years later.

I keep trying to get Democrats to take my advice (stop being so crazy), but they never listen to me. Why do Republicans take the advice of their enemies?

Indeed, the only good thing about McCain is that he gave us a genuine conservative, Sarah Palin. He's like one of those insects that lives just long enough to reproduce so that the species can survive. That's why a lot of us are referring to Sarah as "The One" these days.

Like Sarah Connor in "The Terminator," Sarah Palin is destined to give birth to a new movement. That's why the Democrats are trying to kill her. And Arnold Schwarzenegger is involved somehow, too. Good Lord, I'm tired.

After showing nearly superhuman restraint throughout this campaign, which was lost the night McCain won the California primary, I am now liberated to announce that all I care about is hunting down and punishing every Republican who voted for McCain in the primaries. I have a list and am prepared to produce the names of every person who told me he was voting for McCain to the proper authorities.

For now, we have a new president-elect. In the spirit of reaching across the aisle, we owe it to the Democrats to show their president the exact same kind of respect and loyalty that they have shown our recent Republican president.