But Will They Respect Him In The Morning? 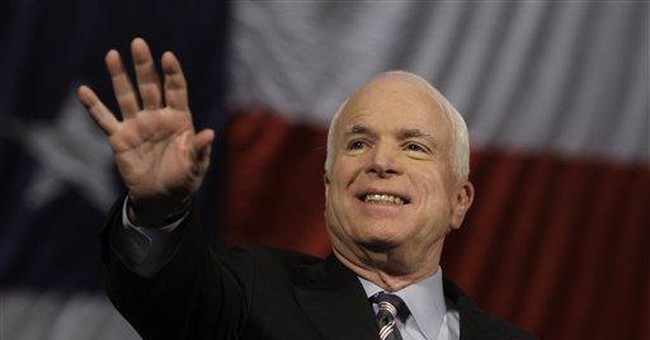 Back before the Republican Party was saddled with John McCain as its nominee, The New York Times called him "the only Republican who promises to end the George Bush style of governing from and on behalf of a small, angry fringe." The paper praised him for "working across the aisle to develop sound bipartisan legislation" and predicted that he would appeal to "a broader range of Americans than the rest of the Republican field."

At the same time, the Times denounced "the real" Rudy Giuliani as "a narrow, obsessively secretive, vindictive man" and Mitt Romney as "shape-shifting," claiming it's "hard to find an issue on which he has not repositioned himself to the right since he was governor of Massachusetts."

Here are a few issues I found that Romney hadn't switched positions on, and it wasn't "hard": tax cuts, health care, same-sex marriage, illegal immigration and the surge in Iraq. The only issue on which Romney had changed his position was abortion, irritating people who would prefer for Republicans to refuse to run in places like Massachusetts and New York City in order to preserve their perfect pro-life credentials.

Times columnist Nicholas Kristof echoed the editorial page in early February with a column titled: "Who Is More Electable?" In the very first sentence, Kristof concluded that McCain is "the Republican most likely to win the November election." Kristof touted McCain's "unusual appeal among swing voters" and cited polls that showed McCain would do "stunningly well" in a general election.

Also in February, CNN produced polls showing McCain doing better than "generic Republican" in a general election, which Jeffrey Toobin said was a tribute to how "well respected" McCain is. Hey, is it too late for us to nominate "generic Republican"?

And on MSNBC's "Hardball," from the way Chris Matthews carried on about McCain, you'd think he had caught a glimpse of Obama's ankle. Matthews said that McCain was "the real straight talker ... a profile in courage ... more seasoned than the current president, a patriot, of course ... honest and respected in the media. He has all the pluses in the world of a sort of a, you know, an Audie Murphy, if you will, a real war hero."

I guess the party's over.

Since McCain has gone from being a Republican "maverick" who attacks Republicans and promotes liberal causes to the Republican nominee for president, he's also gone from being one of the Times' most frequent op-ed guest columnists to being an unpublishable illiterate.

I looked up McCain's oeuvre for the Times, and if you want unpublishable, that's unpublishable. In one column, McCain assailed Republicans for their lack of commitment to the environment, noting that polls -- probably the same ones showing him to be the most "electable" Republican -- indicated that "the environment is the voters' number-one concern about continued Republican leadership of Congress."

McCain concluded with this ringing peroration: "(O)ur nation's continued prosperity hinges on our ability to solve environmental problems and sustain the natural resources on which we all depend." That's good writing -- I mean assuming you're writing hack press releases for an irrelevant environmentalist think tank.

The rest of McCain's op-eds in the Times bravely took on -- I quote -- "unnecessary regulation" and "pork-barrel spending." It's that sort of courage and clear-headedness that tells me we're going to be OK this fall.

In coming out four-square against "unnecessary regulation" and "pork-barrel spending," McCain threw down the gauntlet to those who favor "unnecessary regulation" and "pork-barrel spending." Actually, I think there's a rule that says you're not being brave if there is not a single person in the world who would publicly disagree with you.

While the media are busy telling McCain that "It's not you, it's us," Al Gore, a recent Democratic candidate for president, has become certifiably nuts. Gore's increasingly bizarre public statements are a reminder of the dangers of going off carbs cold turkey.

Say, how do "hot lap dances" affect global warming? Last week, a Gore supporter, Louis Posner, enraged over the result of the 2000 presidential election and founder of the Democratic voter organization Voter March, was arrested in New York on charges of prostitution and money laundering.

According to the police, in addition to sponsoring events with Vincent Bugliosi about Bush stealing the 2000 election, Posner ran a prostitution ring out of his club, the Hot Lap Dance Club, where employees say they were required to have sex with Posner in order to work there. No wonder Posner was so testy about the 2000 election -- he wanted to preserve the glory of the Clinton years.

Imagine the important reporting we could have gotten on the Hot Lap Dance Club story if only the entire American media weren't with the Messiah on his "Ich Bin Ein Berlitzer" Tour!

But a two-week vacation in Europe is just what B. Hussein Obama needs to polish up his speech about how all our geopolitical challenges are due to American boorishness and stupidity. That ought to make for a boffo op-ed in The New York Times.