There’s a Huckabee Born Every Minute 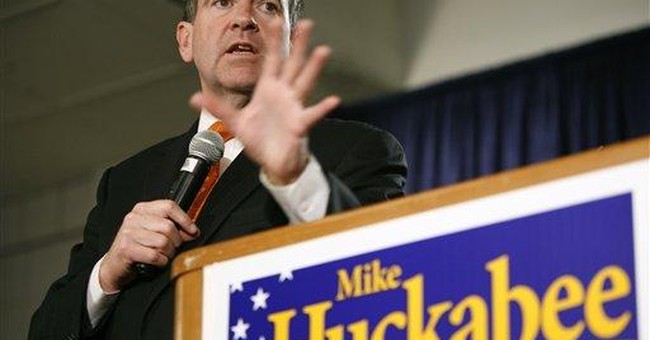 Despite the overwhelming popular demand for another column on Ron Radosh's review of Stan Evans' book, this week's column will address the urgent matter of evangelical Christians getting blamed for Mike Huckabee.

To paraphrase the Jews, this is "bad for the evangelicals."

As far as I can tell, it's mostly secular liberals swooning over Huckabee. Liberals adore Huckabee because he fits their image of what an evangelical should be: stupid and easily led.

The media are transfixed by the fact that Huckabee says he doesn't believe in evolution. Neither do I, for reasons detailed in approximately one-third of my No. 1 New York Times best-selling book, Godless: The Church of Liberalism.

I went on a massive book tour for Godless just last year, including a boffo opening interview with Matt Lauer on NBC's "Today," a one-on-one, full-hour interview with Chris Matthews on "Hardball," and various other hostile interviews from the organs of establishmentarian opinion.

But I didn't get a single question from them on the topic of one-third of my book.

If the mainstream media are burning with curiosity about what critics of Darwinism have to say, how about asking me? I can name any number of mathematicians, scientists and authors who have also rejected Darwin's discredited theory and would be happy to rap with them about it.

But they won't ask us, because, unlike the cornpone, we won't immediately collapse under gentle questioning. It's one thing to be "easily led" by the pope. Huckabee is easily led by Larry King.

Asked on CNN's "Larry King Live" Monday night about his beliefs on evolution, Huckabee rushed to assure King that he has no interest in altering textbooks that foist this fraud on innocent schoolchildren.

I don't understand that. Does Huckabee believe Darwinism is a hoax or not? If he knows it's a fraud, then why does he want it taught to schoolchildren? What other discredited mystery religions -- as mathematician David Berlinski calls Darwinism -- does Huckabee want to teach children? Sorcery? Phrenology? Alchemy?

Admittedly, the truth about Darwinism would be jarring in textbooks that promote other frauds and hoaxes, such as "man-made global warming." Why confuse the little tykes with fact-based textbooks?

Huckabee immediately dropped his alleged skepticism of Darwinism and turned to his main goal as president of the United States: teaching children more art and music. This, he said, was his "passion" because "I think our education system is failing kids because we're not touching the right side of the brain -- the creative side. We are focusing on the left side."

I think I know someone who has just read an article in Reader's Digest about left brain/right brain differences!

When not evolving his position on Darwinism, Huckabee insults gays by pointlessly citing the Bible's rather pointed remarks about sodomy -- fitting the MSM's image of evangelicals sitting around all day denouncing gays. (Which is just so unfair. I'm usually done denouncing gays by 10:30 a.m., 11 tops.) And yet, Huckabee has said he agrees with the Supreme Court's lunatic opinion that sodomy is a constitutional right.

In the 2003 decision Lawrence v. Texas, the Supreme Court overruled Bowers v. Hardwick, a case only 17 years old (and with a name chosen by God) -- despite the allegedly hallowed principle of "stare decisis." As explained in "Godless," stare decisis means: "What's mine is mine and what's yours is negotiable."

Justice Anthony Kennedy's majority opinion in Lawrence was so insane that the lower courts completely ignored it. Since then, courts have disregarded Lawrence in order to uphold state laws banning the sale of vibrators, restricting gays' rights to adopt, prohibiting people from having sex with their adult ex-stepchildren, and various other basic human rights specifically mentioned in our Constitution.

Lawrence was promptly denounced not only by Republican governors and Christian groups across the nation, but also by anyone with sufficient reading comprehension skills to see that the Constitution says nothing about a right to sodomy. But when Huckabee was asked about this jaw-dropping ruling from the high court, he said the majority opinion "probably was appropriate."

He made these remarks on his monthly radio show, "Ask the Governor," as was widely reported at the time, including a July 3, 2003, Arkansas Democrat-Gazette article titled, "Huckabee Says Sex Lives of Adults Not State Affair." I stress that "Ask the Governor" was not a wacky, comedy-based, morning zoo-type radio program. It was supposed to be serious.

Employing the ACLU's "any law I don't like is unconstitutional" test, Huckabee said he supported the court's decision because a law "that prohibited private behavior among adults" would be difficult to enforce. Next he'll be telling us which of the Ten Commandments he considers "nonstarters."

How about adults who privately operate meth labs? How about a private contract between an employer and employee for a salary less than the minimum wage?

Justice Antonin Scalia wrote a spirited dissent in Lawrence, joined by Justices William Rehnquist and Clarence Thomas, raising the somewhat embarrassing point that homosexual sodomy is not technically mentioned in the Constitution. Otherwise, our Founding Fathers would have been our "Founding Life Partners."

Scalia said that inasmuch as the Texas law furthered "the same interest furthered by criminal laws against fornication, bigamy, adultery, adult incest, bestiality and obscenity," the court's ruling placed all these laws in jeopardy.

Most important, Scalia said: "Today's opinion dismantles the structure of constitutional law that has permitted a distinction to be made between heterosexual and homosexual unions." At least no court has tried to legalize gay marriage since that 2003 ruling, so we can be grateful for -- Hey, wait a minute!

Huckabee claims he opposes gay marriage and says Scalia is his favorite justice, but he supports a Supreme Court decision denounced by Scalia for paving the way to a "constitutional right" to gay marriage. I guess Huckabee is one of those pro-sodomy, pro-gay marriage, pro-evolution evangelical Christians.

Further Proof BLM Is a Scam
Townhall
Eric Garcetti defends his parents who are now registered lobbyists on his behalf
Twitchy
Netflix Cancels Some of Its Woke Shows, Signaling Its Backpedal From Leftism Is Well Underway
Redstate
APPALLING: Teen Girl Disappears at NBA Game and Turns Up 11 Days Later in Nude Photos on Sex Trafficking Site
PJ Media