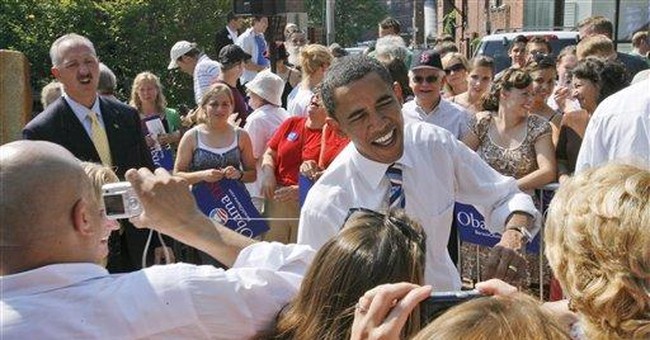 CNN commentators keep telling us how young and hip the audience was for last week's YouTube Democratic debate, apparently unaware that the camera occasionally panned across the audience, which was the same oddball collection of teachers' union shills and welfare recipients you see at all Democratic gatherings.

Noticeably, Gov. Bill Richardson got the first "woo" of the debate -- the mating call of rotund liberal women -- for demanding a federal mandate that would guarantee public schoolteachers a minimum salary of $40,000.

So much for the "younger, hipper" audience. Maybe CNN meant "hippier," as in, "My, she's looking a bit hippy these days."

Not counting talking snowmen, the main difference in the YouTube debate audience and the audience for the earlier CNN Democratic debate is that the YouTube debate had 173,000 fewer viewers in the 18-49 demographic. So it was provably not young and, on the basis of casual observation, definitely not hip.

B. Hussein Obama said he was for slavery reparations in many forms, but the only one that got applause was for more "investment" in schools. In Obama's defense, the precise question was: "But is African-Americans ever going to get reparations for slavery?" So a switch to the subject of education was only natural.

Moreover, a question on reparations has got to be confusing when you're half-white and half-black. What do you do? Demand an apology for slavery and money from yourself? I guess biracial reparations would involve sending yourself money, then sending back a portion of that money to yourself, minus 50 percent in processing fees -- which is the same way federal aid works.

The candidates all managed to come up with good reasons for sending their kids to private schools -- with extra points for reasons that involved a family tragedy or emergency -- but it didn't seem to occur to any of them that ordinary families might have good reasons, too.

In her first risible lie of the debate, Hillary said Chelsea went to public schools in Arkansas. But when they moved to Washington, they were advised that "if she were to go to a public school, the press would never leave her alone, because it's a public school. So I had to make a very difficult decision."

"Unfortunately," she said, it was "good advice."

Was it really that difficult a decision not to send Chelsea to public schools in Washington, D.C.?

This is how The New York Times recently described the schools in Washington, which it called "arguably the nation's most dysfunctional school system."

"Though it is one of the country's highest-spending districts, most of the money goes to central administration, not to classrooms, according to a recent series of articles in The Washington Post. Its 55,000 mostly poor students score far worse than comparable children anywhere else in reading and math, with nearly 74 percent of the district's low-income eighth-graders lacking basic math skills, compared with the national average of 49 percent."

So Hillary was dying to send Chelsea to the D.C. public schools, but "unfortunately" did not do so only because of the press? Did she also agonize over whether to allow Chelsea to play in traffic?

She was not dying to send Chelsea to D.C. public schools. And no Democrat cares about "education" or "the poor."

Democrats care about social service bureaucrats who make their living allegedly working on behalf of the poor -- the famed "public service" the Democrats always drone on about -- jobs that would disappear if we ever eliminated poverty. That's why Democrats keep coming up with policies designed to create millions and millions more poor people.

Democrats fight tooth and nail against any measures that would actually help the poor, such as allowing schools to fire bad teachers. They refuse to allow parents with children in the rotten D.C. public schools to take money out of the public school system so their kids could go to Sidwell Friends like Chelsea.

Most important, Democrats resolutely refuse to tell the poor the secret to not being poor: Keep your knees together until marriage.

That's it. Not class size, not preschool, not even vouchers, though vouchers would obviously improve the education of all students. You could have lunatics running the schools -- and often do -- and if the kids live with married parents, they will end up at good colleges and will lead happy, productive lives 99 percent of the time.