The 'Bumper Sticker' That Blows Up 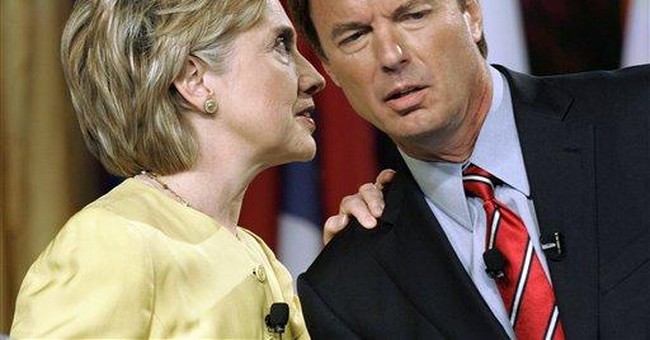 For six years, the Bush administration has kept America safe from another terrorist attack, allowing the Democrats to claim that the war on terrorism is a fraud, a "bumper sticker," a sneaky ploy by a power-mad president to create an apocryphal enemy so he could spy on innocent librarians in Wisconsin. And that's the view of the moderate Democrats. The rest of them think Bush was behind the 9/11 attacks.

But now with the U.S. government -- as well as the British and German governments -- warning of major terrorist attacks this summer, the Treason Lobby is facing the possibility that the "bumper sticker" could blow up in their faces.

The Democrats' entire national security calculus is based on the premise that "we have no important enemies," as stated by former senator Mike Gravel. He's one of the Democratic presidential candidates who doesn't know he's supposed to lie when speaking to the American people.

Ironically, the Democrats' ability to sneer at President Bush hinges on Bush's successful prosecution of the war on terrorism, despite the Democrats. It's going to be harder to persuade Americans that the "war on terrorism" is George Bush's imaginary enemy -- the Reichstag fire, to quote our first openly Muslim congressman Keith Ellison -- if there is another terrorist attack.

So naturally, they are blaming any future terrorist attacks on the war in Iraq.

The Democrats blame everything on Iraq, but their insane argument that we are merely annoying the enemy by fighting back has been neurotically repeated since the failed terrorist bombing in London a few weeks ago. The venue of the terrorists' latest attempt, a hot London nightclub, might even shake up the young progressive crowd. Apparently their soirees are not off-limits, notwithstanding their dutiful anti-imperialism.

In anticipation of their surrender strategy becoming substantially less popular in the wake of another terrorist attack, the Democrats are all claiming that the threat of terrorism was nonexistent -- notwithstanding 9/11, the Cole bombing, the bombing of our embassies, the bombing of the World Trade Center, the Achille Lauro, etc. etc. -- until George Bush invaded Iraq.

In the past week, B. Hussein Obama said the war in Iraq has made us more vulnerable to terrorist attacks. Americans are "more at risk," he said, "and less safe than we should have been at this point." We would be safer with "better polices" -- such as, presumably, Bill Clinton's policy of pretending Islamic terrorists don't exist and leaving the problem for the next president.

Hillary Clinton said we need to start "reversing our priorities. Let's stop sending troops to Iraq and let's start insuring every single child." Yes, that should put a good healthy scare into the insurgents. "Run for your life, Ahmed! All American children are getting regular checkups!"

Sen. Chris Dodd miraculously straddled both arguments -- that the threat of terrorism is a fraud and that the Iraq war had increased its danger. He said "al-Qaida is insurgent again" because we've "turned Iraq into an incubator" for jihadists. But simultaneously with warning of a terrorist attack, Dodd also said he was "more skeptical than I'd like to be" of the Bush administration's warning of a terrorist attack. Damn that Bush! He's inflamed an imaginary enemy!

CNN correspondent Suzanne Malveaux matter-of-factly reported this week: "President Bush says the central front in the war on terror is Iraq. But when the U.S. first invaded the country almost five years ago, al-Qaida had very little presence. But the intelligence report says that has changed. Al-Qaida not only has become a dangerous threat, the intelligence community expects the terrorist group will use its contacts and capabilities there to mount an attack on U.S. soil."

Say, wasn't the attack of 9/11 an "attack on U.S. soil"? How could that have happened since we hadn't invaded Iraq yet? What a weird aberration. How about the attacks on our embassies in Kenya and Tanzania? How about the 1993 World Trade Center bombing? The taking of our embassy in Tehran?

Another CNN correspondent, Ed Henry, followed up Malveaux's report with the somber news that "the president was warned before the war in Iraq that if you go in and invade Iraq, you're going to give al-Qaida more opportunities to expand its influence."

Similarly, Hitler and Goebbels never had much to say about the United States -- not, that is, until we started fighting them!

But as soon as we entered the war -- taking the bait of Hitler's declaration of war against us, which Democrats are urging us to avoid falling for in the case of al-Qaida -- Hitler began portraying FDR as a pawn of the Jews. Soon posters started appearing in Germany showing the United States as a country run by Jews and Negroes. Fake dollar bills with the Star of David were air-dropped over Paris.

According to the Democrats' logic, FDR's policies made the United States less safe. Had Germany attacked us at Pearl Harbor? No. Was Hitler able to use America entering the war as a recruiting tool? Yes. Fighting the enemy always seems to make them mad. It's as plain as the nose on your face.

Democrats think they have concocted a brilliant argument by saying that jihadists have been able to recruit based on the war in Iraq. Yes, I assume so. Everything the United States has done since 9/11 has galvanized the evil people of the world to fight the U.S. In World War II, some Frenchmen joined the Waffen SS, too. And the good people of the world have been galvanized to fight on the side of the U.S. The question is: Which side are the Democrats on?