That was no lady -- That was my husband 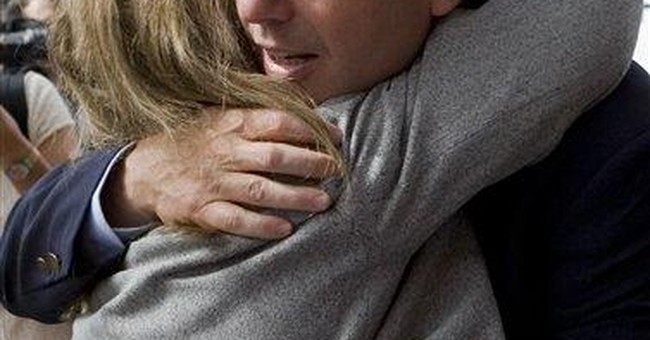 The Edwards campaign is apparently still running low on donations, so this week they went back to their top fundraiser: me.

I doubled the ratings of the lowest-rated cable news show on Tuesday by agreeing to go on for a full hour to promote my new paperback version of "Godless" -- a mistake I won't make again. As I was walking to the set, minutes before airtime, it was casually mentioned to me that Elizabeth Edwards, wife of Democratic presidential candidate, John Edwards, might call in.

For the first time in recorded history, the show's host did not interrupt a guest, but let Elizabeth Edwards ramble on and on, allowing her to browbeat me for being mean to her husband. (This delicate flower is very sensitive to rough words, having hired the Edwards' campaign staffer who wrote this: "What if Mary had taken Plan B after the Lord filled her with his hot, white, sticky Holy Spirit"?)

Say, did any TV host ever surprise Al Franken, Bill Maher or Arianna Huffington with a call by the wife of someone they've made nasty remarks about? How about a call to John Edwards from the wife of a doctor he bankrupted with his junk-science lawsuits?

I think I may have tuned out at some point, so I can only speak to the first 45 minutes of Elizabeth Edwards' harangue, but it mostly consisted of utterly dishonest renditions of things I had said on my "Good Morning America" interview this week and a column I wrote four years ago. (You can't rush Edwards' "rapid response team"!) She claimed I had launched unprovoked attacks on the Edwards' dead son and called for a terrorist attack on her husband.

These are bald-faced lies, and the mainstream media knows they are lies. Yet they were repeated ad nauseam on Wednesday by The Associated Press, the AOL pop-up window, CNN, NBC and -- stunningly -- the host of the lowest-rated cable show himself, who personally told me he knew the truth.

So for those of you who haven't read any of my five best-selling books: Liberals are driven by Satan and lie constantly.

Here is my full sentence on "Good Morning America," which the media deceptively truncated, referring to a joke I told about Edwards six months ago that made liberals cry: "But about the same time, you know, Bill Maher was not joking and saying he wished Dick Cheney had been killed in a terrorist attack -- so I've learned my lesson: If I'm going to say anything about John Edwards in the future, I'll just wish he had been killed in a terrorist assassination plot."

The usual nut Web sites posted a zillion denunciations of my appearance on "Good Morning America" immediately after I appeared Monday morning. But it didn't occur to any of them to simply lie about what I had said. No, it took them nearly 36 hours to concoct a version of that quote that included the Edwards part, but not the Maher part, or what English language speakers call: "the point."

By tomorrow it will be: "Ann Coulter tried to kill John Edwards on 'Good Morning America'!"

Judging by his fundraising efforts so far, I gather most of you don't know who John Edwards is -- unless you're an overpriced hair dresser. He's the trial lawyer who pretended in court to channel the spirit of a handicapped fetus in front of illiterate jurors to scam tens of millions of dollars off of innocent doctors. According to The New York Times, Edwards told one jury: "She speaks to you through me ... And I have to tell you right now -- I didn't plan to talk about this -- right now I feel her. I feel her presence. She's inside me, and she's talking to you."

"(Kerry) was even queasier about Edwards after they met. Edwards had told Kerry he was going to share a story with him that he'd never told anyone else -- that after his son Wade had been killed, he climbed onto the slab at the funeral home, laid there and hugged his body, and promised that he'd do all he could to make life better for people, to live up to Wade's ideals of service. Kerry was stunned, not moved, because, as he told me later, Edwards had recounted the same exact story to him, almost in the exact same words, a year or two before -- and with the same preface, that he'd never shared the memory with anyone else. Kerry said he found it chilling, and he decided he couldn't pick Edwards unless he met with him again."

Apparently every time Edwards began a story about his dead son with "I've never told anyone this before," everyone on the campaign could lip-sync the story with him.

As a commentator, I bring facts like these to the attention of the American people in a lively way. Thus, for example, in a column about the Democratic candidates for president written in 2003, I pointed out that the Democrats refused to discuss the economy or the war, but had recently "discovered a surprise campaign issue: It turns out that several of them have had a death in the family."

Among several examples of Democrats talking about a death in the family on the campaign trail was this one:

Edwards has talked about his son's death in a 1996 car accident on "Good Morning America," in dozens of profiles and in his new book. ("It was and is the most important fact of my life.") His 1998 Senate campaign ads featured film footage of Edwards at a learning lab he founded in honor of his son, titled "The Wade Edwards Learning Lab." He wears his son's Outward Bound pin on his suit lapel. He was going to wear it on his sleeve, until someone suggested that might be a little too "on the nose."

If you want points for not using your son's death politically, don't you have to take down all those "Ask me about my son's death in a horrific car accident" bumper stickers? Edwards is like a politician who keeps announcing that he will not use his opponent's criminal record for partisan political advantage.

Manifestly, I was not making fun of their son's death; I was making fun of John Edwards' incredibly creepy habit of invoking his son's tragic death to advance his political career -- a practice so repellant, it even made John Kerry queasy.

I'm a little tired of losers trying to raise campaign cash or TV ratings off of my coattails, particularly when they use their afflictions or bereavement schedules to try to silence the opposition. From now on, I'm attacking only serious presidential candidates, like Dennis Kucinich.