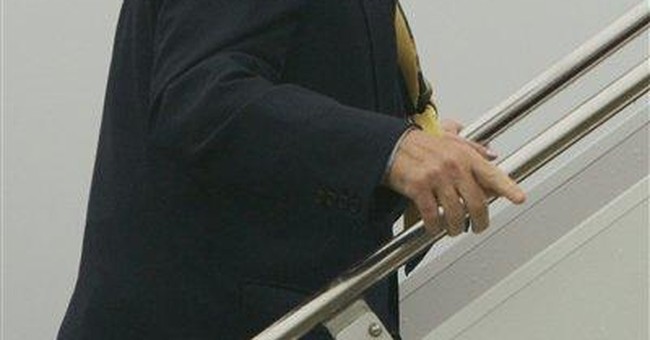 Republicans' defense of President Bush's immigration bill is more enraging than their defense of Harriet Miers. Back then, Bush's conservative base was accused of being sexist for opposing an unqualified woman's nomination to the highest court in the land. Now we're racists for not wanting to grant amnesty to millions of illegal aliens.

I don't know why conservatives like Linda Chavez have to argue like liberals by smearing their opponents as racists. Oh wait, now I remember! Their arguments are as strong as liberals' arguments usually are.

Apart from abortion, no subject produces so much disingenuousness as America's immigration policy, both legal and illegal. For nearly 50 years, Americans have been intentionally lied to about our immigration laws.

In 1965, Teddy Kennedy overhauled immigration law with the specific purpose of effecting a dramatic change in the nation's demographics. Bobby Kennedy had civil rights, so Teddy needed something big: He would preside over a civil rights bill for the entire Third World! My word, but that man could drink in those days.

With his 1965 immigration act, Kennedy embarked on entirely transforming American culture for no good reason. (You know how people always say the same arguments against illegal immigrants today were once made about the Irish to show how silly those arguments are? If only the U.S. Senate had had an "Irish Need Not Apply" sign!)

Until that point, immigration law basically took a laissez-faire approach, with country quotas attempting to replicate the traditional immigration patterns. Most immigrants to America had historically come from Great Britain, Germany and Scandinavian countries. Consequently, immigration quotas roughly reflected that balance, with smaller numbers of immigrants admitted from other countries.

But in an angry, long-awaited payback to WASPs, Kennedy decided he was going to radically transform the racial composition of the country. Instead of taking 15 immigrants from England and three from China, America would henceforth take three from England and 15 from China. Payback's a bitch, Daughters of the American Revolution!

Some of those hardworking immigrants who just want a chance to succeed were arrested in a plot to blow up JFK Airport last week.

In 1960, whites were 90 percent of the country. The Census Bureau recently estimated that whites already account for less than two-thirds of the population and will be a minority by 2050. Other estimates put that day much sooner.

One may assume the new majority will not be such compassionate overlords as the white majority has been. If this sort of drastic change were legally imposed on any group other than white Americans, it would be called genocide. Yet whites are called racists merely for mentioning the fact that current immigration law is intentionally designed to reduce their percentage in the population.

We needed to have "more discussion" about Iraq for nearly two years before finally invading. When will we be allowed to begin discussion of a government policy enacted by stealth 40 years ago specifically intended to decimate one particular ethnic group in our own country?

If liberals think Iraqis are genetically incapable of pulling off even the most rudimentary form of democracy, why do they believe 50 million Mexicans will magically become good Americans, imbued in the nation's history and culture, upon crossing the Rio Grande? Maybe we should dunk Iraqis in the Rio and see what happens.

And as long as we're adopting an open borders policy for immigration, how about opening the borders for emigration? As it stands, anyone can come in and start plotting terrorist attacks or collecting government services right away. But the rest of us can never escape having to pay for it.

You can leave the country, you can renounce your citizenship -- but you still owe taxes for 10 years. The government does not allow us to stop supporting welfare recipients in America, millions more of whom it plans to import under Bush's bill. That's not a free market -- it's a roach motel.

If these free-marketeers at The Wall Street Journal want the free movement of people, how about letting us freely leave after they've wrecked the country?

In Samuel P. Huntington's book "Who Are We? The Challenges to America's National Identity," he asks: "Would America be the America it is today if in the 17th and 18th centuries it had been settled not by British Protestants but by French, Spanish or Portuguese Catholics? The answer is no. It would not be America; it would be Quebec, Mexico or Brazil."

I don't want to live in Mexico, Quebec or Brazil. But now I guess I have no choice, since "open borders" means I can never leave.