No Wonder They're Afraid of Brit Hume 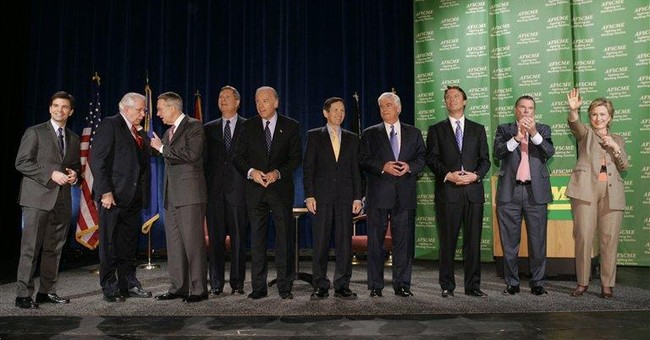 I just woke up from watching the Democrats' debate last Thursday, and I am rested and ready to report!

Someone needs to tell the Democrats to stop talking about their families. I know they're trying to demonstrate their "family values," but using actual, live human beings to illustrate the freakish ideas of the Democratic base just makes normal people uncomfortable.

When Chris Dodd was asked about gay marriage, he said he always thinks of his little daughters -- aged 2 and 5 -- and imagines them turning out to be lesbians, saying he would want them treated equally.

To prove his bona fides to the environmentalist nuts, Obama said: "We've also been working to install lightbulbs that last longer and save energy. And that's something that I'm trying to teach my daughters, 8-year-old Malia and 5-year-old Sasha."

So we finally have an answer to the question: What do Democrats teach their daughters? Is it:

(c) the importance of always telling the truth

No! The answer is: (d) They teach their daughters to use low-energy lightbulbs. This is so important that it apparently bears mentioning during a debate under high-intensity TV studio lights.

(How many kids does it take to screw in a lightbulb? In the Barack household, evidently, it takes two.)

"Best in Show" for cringe-inducing mentions of family members went to John Edwards. In the single most appalling moment of the debate, John Edwards reminisced about the time his father, who was sitting in the audience, totally humiliated him as a child.

"I can remember vividly my dad after church once Sunday, when I was about 10 years old, taking us -- it's our whole family -- into a restaurant. I was dressed up. I was very proud to be there, and we sat, got our menus, looked at the menus, and the waitress came over and my father said, 'I'm sorry. We have to leave.' I didn't understand. 'Why? Why do we have to leave?' And I was embarrassed. I found out when we got outside the reason we had to leave is he couldn't pay the prices that were on the menu."

Thanks for the memories, Pop!

The not-visibly-insane Democrats all claim they'll get rough with the terrorists, but they can't even face Brit Hume.

In case you missed this profile in Democrat machismo, the Democratic presidential candidates are refusing to participate in a debate hosted by Fox News Channel because the hosts are "biased." But they'll face down Mahmoud Ahmadinejad!

At this, even Hillary Clinton was thinking, "Come on, guys -- let's grow a pair."

Obama was asked to name "America's three most important allies around the world" -- a question rejected as "too easy" on Fox's new game show "Are You Smarter Than a 5th Grader?" Any politically savvy 11-year-old could have named Britain, Australia and Israel.

B. Hussein Obama answered: "the European Union." Which is (a) not a country, and (b) not an ally.

What was his next guess? Epcot Center?

In addition to not being a country, the "European Union" happens to be composed of people who hate our guts. It is the continent where Moveon.org-style lunatics are the friendly, pro-American types and the rest are crazy Muslims.

Obama did eventually mention Japan as an ally -- along with China and Afghanistan -- which would have been a better answer to the question: "Who are America's four or five most important allies?" But at least he named a country that could conceivably be called "an ally."

Of course, it took Obama less time to remember an American ally than it took John Edwards to remember Jesus. Edwards was asked who his "moral leader" was -- and he was stuck for an answer.

I had time to shout "Jesus" at the TV 20 times, exhaust myself, and have a sandwich before Edwards finally coughed up "mah lowrd." Even then it appeared that Edwards was not actually naming the Savior but exclaiming, "Mah lowrd, that's a tough question!"

Edwards then put "mah lowrd" (assuming that was his answer) on a par with other moral leaders such as his father -- who had embarrassed him so as a child -- and his wife. (When he mentioned his spouse as a "moral leader," Hillary visibly tensed for fear that she might be asked the same question.)

If you're keeping score, that's two major religions the Democrats lack a working knowledge of -- Christianity and Islam.