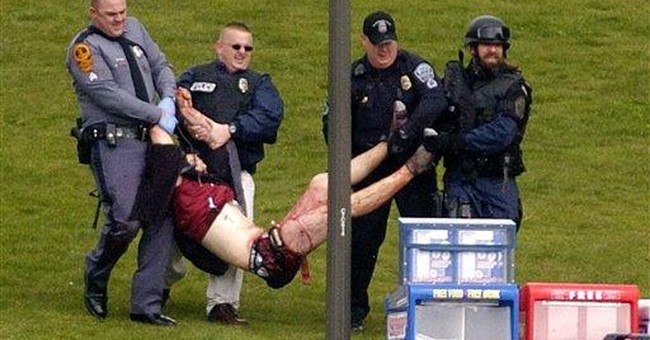 From the attacks of 9/11 to Monday's school shooting, after every mass murder there is an overwhelming urge to "do something" to prevent a similar attack.

But since Adam ate the apple and let evil into the world, deranged individuals have existed.

Most of the time they can't be locked up until it's too late. It's not against the law to be crazy -- in some jurisdictions it actually makes you more viable as a candidate for public office.

It's certainly not against the law to be an unsociable loner. If it were, Ralph Nader would be behind bars right now, where he belongs. Mass murder is often the first serious crime unbalanced individuals are caught committing -- as appears to be in the case of the Virginia Tech shooter.

The best we can do is enact policies that will reduce the death toll when these acts of carnage occur, as they will in a free and open society of 300 million people, most of whom have cable TV.

Only one policy has ever been shown to deter mass murder: concealed-carry laws. In a comprehensive study of all public, multiple-shooting incidents in America between 1977 and 1999, the inestimable economists John Lott and Bill Landes found that concealed-carry laws were the only laws that had any beneficial effect.

And the effect was not insignificant. States that allowed citizens to carry concealed handguns reduced multiple-shooting attacks by 60 percent and reduced the death and injury from these attacks by nearly 80 percent.

Apparently, even crazy people prefer targets that can't shoot back. The reason schools are consistently popular targets for mass murderers is precisely because of all the idiotic "Gun-Free School Zone" laws.

From the people who brought you "zero tolerance," I present the Gun-Free Zone! Yippee! Problem solved! Bam! Bam! Everybody down! Hey, how did that deranged loner get a gun into this Gun-Free Zone?

It isn't the angst of adolescence. Plenty of school shootings have been committed by adults with absolutely no reason to be at the school, such as Laurie Dann, who shot up the Hubbard Woods Elementary School in Winnetka, Ill., in 1988; Patrick Purdy, who opened fire on children at Cleveland Elementary School in Stockton, Calif., in 1989; and Charles Carl Roberts, who murdered five schoolgirls at an Amish school in Lancaster County, Pa., last year.

Oh by the way, the other major "Gun-Free Zone" in America is the post office.

But instantly, on the day of the shooting at Virginia Tech, the media were already promoting gun control and pre-emptively denouncing right-wingers who point out that gun control enables murderers rather than stopping them. Liberals get to lobby for gun control, but we're disallowed from arguing back. That's how good their arguments are. They're that good.

Needless to say, Virginia Tech is a Gun-Free School Zone -- at least until last Monday. The gunman must not have known. Imagine his embarrassment! Perhaps there should be signs.

Virginia Tech even prohibits students with concealed-carry permits from carrying their guns on campus. Last year, the school disciplined a student for carrying a gun on campus, despite his lawful concealed-carry permit. If only someone like that had been in Norris Hall on Monday, this massacre could have been ended a lot sooner.

But last January, the Virginia General Assembly shot down a bill that would have prevented universities like Virginia Tech from giving sanctuary to mass murderers on college campuses in Virginia by disarming students with concealed-carry permits valid in the rest of the state.

Virginia Tech spokesman Larry Hincker praised the legislature for allowing the school to disarm lawful gun owners on the faculty and student body, thereby surrendering every college campus in the state to deranged mass murderers, saying: "I'm sure the university community is appreciative of the General Assembly's actions because this will help parents, students, faculty and visitors feel safe on our campus."

Others disagreed. Writing last year about another dangerous killer who had been loose on the Virginia Tech campus, graduate student Jonathan McGlumphy wrote: "Is it not obvious that all students, faculty and staff would have been safer if (concealed handgun permit) holders were not banned from carrying their weapons on campus?"

If it wasn't obvious then, it is now.