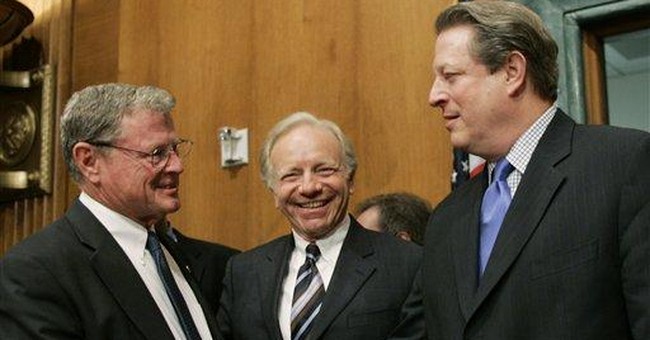 No matter how much liberals try to dress up their nutty superstitions about global warming as "science," which only six-fingered lunatics could doubt, scratch a global warming "scientist" and you get a religious fanatic.

These days, new religions are barely up and running before they seize upon the worst aspects of the God-based religions.

The only place Al Gore conserves energy these days is on the treadmill. I don't want to suggest that Al's getting big, but the last time I saw him on TV I thought, "That reminds me -- we have to do something about saving the polar bears."

Never mind his carbon footprint -- have you seen the size of Al Gore's regular footprint lately? It's almost as deep as Janet Reno's.

But I digress. As has been widely reported, Gore's Tennessee mansion consumes 20 times the energy of the average home in that state. But it's OK, according to the priests of global warming. Gore has purchased "carbon offsets."

It took the Catholic Church hundreds of years to develop corrupt practices such as papal indulgences. The global warming religion has barely been around for 20 years, and yet its devotees are allowed to pollute by the simple expedient of paying for papal indulgences called "carbon offsets."

Americans spend an extra $2.2 billion on gas a year because they're overweight, requiring more fuel in cars to carry the extra pounds. So even with all those papal indulgences, Gore may have a small carbon footprint, but he has a huge carbon butt-print.

Further proving that liberalism is a religion, its practitioners respond with the zeal of Torquemada to any dissent from the faith in global warming.

A few years ago, Danish statistician Bjorn Lomborg wrote a book titled "The Skeptical Environmentalist," disputing the hysteria surrounding global warming and other environmentalist scares. Lomborg is a Greenpeace anti-war protester -- or, as he is described on liberal Web sites, he is a "young, gay vegetarian Dane with tight T-shirts." His book was cited favorably in The New York Times.

But for questioning the "science" behind global warming, Lomborg was brought up on charges of "scientific misconduct" by Denmark's Inquisition Court, called the "Ministry of Science, Technology and Innovation." I take it Denmark's Ministry of Truth was booked solid that day.

The moment anyone diverges from official church doctrine on global warming, he is threatened with destruction. Heretics would be burnt at the stake if liberals could figure out how to do it in a "carbon neutral" way.

Climatologist Dr. Timothy Ball is featured in the new documentary debunking global warming, titled "The Great Global Warming Swindle." For this heresy, Ball has received hate mail with such messages as, "If you continue to speak out, you won't live to see further global warming."

Global warming is supposed to be "science." It's hard to imagine Niels Bohr responding to Albert Einstein's letter questioning quantum mechanics with a statement like: "If you continue to speak out, you won't live to see further quantum mechanics."

Come to think of it, one can't imagine the pope writing a letter to Jerry Falwell saying, "If you continue to speak out, you won't live to see further infallibility."

If this is how global warming devotees defend their scientific theory, it may be a few tweaks short of a scientific theory. Scientific facts are not subject to liberal bullying -- which, by the way, is precisely why liberals hate science.

A few years ago, The New York Times ran an article about the continuing furious debates among physicists about quantum mechanics, which differs from global warming in the sense that it is supported by physical evidence and it doesn't make you feel good inside to "do something" about quantum mechanics. It is, in short, science.

Though he helped develop the theory of quantum mechanics, Einstein immediately set to work attacking it. MIT cosmologist Max Tegmark called the constant testing and arguing about quantum mechanics "a 75-year war."

That's how a real scientific theory operates. That's even how a real religion operates. Only a false religion needs hate mail, threats, courts of inquisition and Hollywood movies to sustain it.