In Washington, it's always the year of the rat 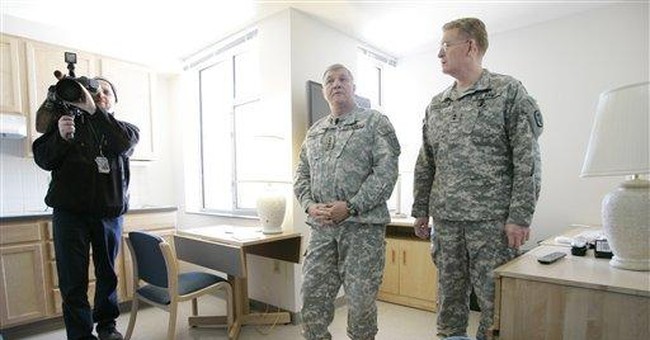 To the contrary, the problems at Walter Reed are further proof of the Democrats' failed domestic policies -- to wit, the civil service rules that prevent government employees from ever being fired. (A policy that also may account for Robert Byrd's longevity as a U.S. senator.)

Thanks to the Democrats, government employees have the world's most complicated set of job protection rules outside of the old East Germany. Oddly enough, this has not led to a dynamic workforce in the nation's capital.

Noticeably, the problems at Walter Reed are not with the doctors or medical care. The problems are with basic maintenance at the facility.

Unless U.S. Army generals are supposed to be spraying fungicide on the walls and crawling under beds to set rattraps, the slovenly conditions at Walter Reed are not their fault. The military is nominally in charge of Walter Reed, but -- because of civil service rules put into place by Democrats -- the maintenance crew can't be fired.

You will find the exact same problems anyplace market forces have been artificially removed by the government and there is a total absence of incentives, competition, effective oversight, cost controls and so on. It's almost like a cause-and-effect thing.

The Washington Post could have done the same report on any government facility in the Washington, D.C., area.

In a typical story from the nation's capital, last year, a 38-year-old woman died at the hospital after her blood pressure dropped and a D.C. ambulance took 90 minutes to pick her up and take her to a hospital that was five minutes away. For 90 minutes, the 911 operator repeatedly assured the woman's sister that the ambulance was on its way.

You read these stories every few months in Washington.

New York Times reporter David Rosenbaum also died in Washington last year after being treated to the famed work ethic of the average government employee. Rosenbaum was mugged near his house and hit on the head with a pipe. A neighbor found him lying on the sidewalk and immediately called 911.

First, the ambulance got lost on the way to Rosenbaum. Then, instead of taking him to the closest emergency room, the ambulance took him to Howard University Hospital, nearly 30 minutes away, because one of the "emergency medical technicians" had personal business in the area.

Once he finally arrived at the hospital, Rosenbaum was left unattended on a gurney for 90 minutes because the "emergency medical technicians" had completely missed his head injury and listed him as "drunk" and "low priority."

Months later, the deputy mayor for public safety told The Washington Post that "to the best of his knowledge, no one involved in the incident had been fired."

No one has any authority over civil service employees in the nation's capital. Bush probably lives in terror of White House janitors. The White House bathroom could be flooding and he'd be told: "I'll get to you when I get to you. Listen, fella, you're fifth on my list. I'm not making any promises, just don't flush for the next week."

On "ABC News" last year, a CBS radio reporter described a rat jumping off the camera in the White House press briefing room in the middle of a press conference. (And a shrew sits right in the front!) The Washington Post called the White House press room -- located between the residence and the Oval Office -- "a broken-down, rat-infested fire trap." During David Gregory's stand-up report on MSNBC about the damage done to Republicans by conditions at Walter Reed, rats appeared to be scurrying on the ground behind him.

Instead of an investigative report on the problems at Walter Reed, how about an investigative report on what happens when the head of janitorial services at Walter Reed is told about the dirt, mold and rats at the facility? If it's before 2:30 in the afternoon and he's still at work and he hasn't taken a "sick day," a "vacation day," a "personal day" or a "mental health day," I predict the answer will be: "I'm on my break."

The Democrats' response is: We must pass even more stringent rules to ensure that all government employees get every single break so that public-sector unions will continue giving massive campaign donations to the Democrats.

This was, you will recall, the precise issue that led to a partisan battle over the Homeland Security bill a few years ago: Whether employees at an emergency terrorist response agency could be fired -- as Republicans wanted -- or if they would be subject to civil service rules and unfireable -- as the Democrats wanted.

HELLO? HOMELAND SECURITY? THERE'S A BOMB IN THE WELL OF THE SENATE!

Sorry, not my job. Try the Department of Public Works.

Now that the Democrats are once again pretending to give a damn about the troops by wailing about conditions at Walter Reed, how about some Republican -- maybe Chambliss! -- introduce a bill to remove civil service protections from employees at Walter Reed and all veterans' hospitals? You know, a bill that would actually address the problem.

And don't worry about the useless, slothful government employees who can only hold jobs from which they cannot be fired. We'll get them jobs at the EPA and Department of Education.