What if Mormonism Was the Issue? 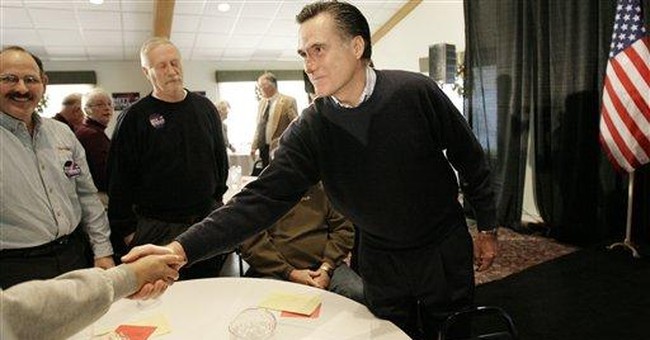 Charles Krauthammer writes, “The Constitutional injunction against religious tests is meant to make citizens understand that such tests are profoundly un-American.” Well, Chuck, I’m growing tired of you and others telling me what I may or may not consider in my voting decision.

I care about a candidate’s religion. It’s not the only thing I care about, but, still, I care about it. And I’m about fed up with people telling me I’m a bigot and un-American because I happen to have a different idea of what matters in my decision for whom to vote than they do. How about this: I won’t say you’re un-American for ignoring religion if you stop saying I’m un-American for considering it.

I care that Mike Huckabee is an ordained Baptist. I happen to think Baptists are wrong about a lot, but I still care that he is. I care that Hillary Clinton is a full-fledged non-Wesleyan United Methodist. That tells me a lot about her. I care that Barack Obama is a member of the United Church of Christ. I care that Rudy Giuliani is a Catholic, mostly because of the fact that he is so disconnected from the core doctrines of his own faith. This tells me a lot about him. Yes, he is rebellious, but he’s also stubborn like a mule. Rudy would never have had to give the JFK speech because it would be preposterous to think he cares what the Pope thinks about his political views.

And, as it happens, I care that Mitt Romney is a Mormon.

Oh, don’t get me wrong. I could still vote for him. Though I’m a non-denominational Evangelical Christian (since you asked), I’m not of the camp who thinks that Latter Day Saints are members of some Satanic cult in league with the Freemasons and the Bilderbergers.

But what if I thought they were?

If I did in fact believe that a candidate’s religion were evil, would you really be so audacious as to tell me that I’m not allowed to consider that when I enter the voting booth? For all the conservative lip-service given to protecting religion from government, that sure sounds to me like you’re saying I’m not allowed to bring my religious views to the ballot box with me.

I would not vote for a Scientologist. They make good movies, especially when John Woo is directing, but I don’t want them running NASA. I would not vote for a Christian Scientist. I love their newspaper, but I don’t want them overseeing the FDA. I would not vote for a Muslim. At this moment in world history, I’m having a hard time really believing that Islam is compatible with the notions of freedom from government coercion that we cherish in this country. Most Muslims and I agree deeply about private morality, but I don’t share their belief that God only cares what the society looks like and not whether freedom is allowed as part of the process of getting there. And perhaps most obviously, I don’t want to vote for an atheist. I was one, and I am no longer. I do not want to deliberately put someone in the White House (or any other marble hall) who does not consider himself accountable to any god at all.

Allow me to clarify myself. By saying, “I would not vote for” them, I’m actually saying I would prefer not to have to. This is not a strict pass/fail grading system. These are merely strong considerations for me because they pertain to character and judgment, and other factors could certainly counterbalance them. Still, these are strong preferences.

So do these views make me a bigot? If so, then bigot I am, but I’m hard pressed to draw the further hasty generalization that all bigotry is bad. My Webster’s says that a bigot is someone “obstinately or intolerantly devoted to his own church, party, belief, or opinion.” That sounds like an apt description of Martin Luther, Saint Paul, any Pope and even my Savior, quite frankly. It certainly doesn’t mean a racist, which is the similarity implied by the tone of the word use.

Also, lest you mis-stereotype me, I’m probably the most tolerant and open-minded evangelical you’ll meet in your life. I’ll talk with anyone. I’ll be friends with anyone. And I don’t feel threatened by a wildly pluralistic society such as we enjoy in America.

But that’s not the point. When I go into a voting booth, I’m not picking a friend or a conversation partner. I’m picking a leader. I want leaders that I would trust my money and my children with … since I sort of am. And that means that I consider a person’s religious views. Because religion matters, and it matters to me. Why is that so wrong?

“But, Andrew, don’t you know that the Constitution prohibits a religious test for elected office in the United States?” Of course I do. But do you realize that there is a vast difference between officially requiring such a test and me privately considering the results of such a test? You seem to think that simply because it is illegal to require a religious test for office that it should also be illegal to consider a candidate’s religion. Should it also be illegal to ask about it or for him to describe it to us?

“Well, I didn’t say these things should be illegal. I merely meant that you’re being un-American and neglecting the great principles of the Constitution by using them yourself.” Really? Are you sure that you want to take a position which states there is no difference at all between what we do officially through the Constitutional and what we do in our own private judgment?

As I understand democracy, I am free to vote how I think best. Perhaps I’ll vote based on age. Perhaps I’ll vote based on gender. Perhaps I’ll vote based on policies, past record, education, party affiliation, or height. Some of these factors are better than others to consider, but just because I agree that we should not have a State religion, this doesn’t mean I should become religion-blind in my judgments about leadership capacity. Precisely because I believe religion (or even its lack) is central to who a person is, I not only will consider it, but I expect lots of other people to consider it as well. The ones who ignore it can only achieve consistency in their views by believing that religion can and should be walled off from every important area of a man’s life. I’m probably more troubled by such aberrant theology than I am by the non-believer. They would have us believe that God exists but shouldn’t matter. Even the atheist is not so foolish.

I’ve no doubt that this column will be misunderstood by many. They will think this is an attack on Mitt Romney and Mormons more generally. They’ll probably accuse me of opening the door for anti-Semitism. And I’m sure they’ll be saying that I want to make every religion other than mine illegal.

They will be wrong.

Let me repeat. I can easily see myself voting for Mitt Romney. In fact, I spend a fair amount of time convincing those who object to his Mormonism that they should not. Not because religion doesn’t matter, but because they’re wrong in thinking this particular religion is wrong enough to disqualify him. I know too many Mormons to be overly worried about a Mormon President, even though I also have many questions about this very secretive faith.

If I do vote for Mitt, I will do so in part because of his commitment to religion, even one other than my own. But that’s the point. I am considering his religion in my decision, and I am very frustrated by hearing so many conservatives tell me and others who disagree with me in my assessment of Mormonism that we are all a bunch of unpatriotic bigots because we happen to think that what a man believes and practices with regard to God is important stuff.

Truth be told, your bigotry on this point against me is at least as distasteful as my bigotry in considering religion, if either is bigotry at all.