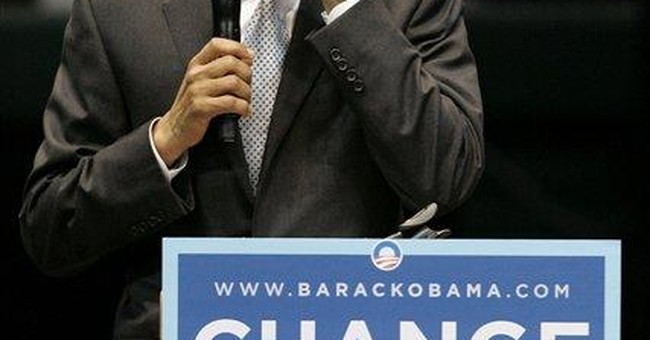 You know the presidential race is in full rhetorical swing when candidates are rallying people against a dangerous enemy of America. It’s time to play on the most basic of voters’ instincts: fear and hate.

The enemy in question has a worldwide network with agents embedded deep in the United States. It gets money from oil. And it has a name that makes the media jump to attention.

Yes, the next president must save us from … Exxon.

You could substitute other Big Business names there, depending on the political climate, but this is the one today’s candidates are naming. In his February 12 speech, Barack Obama summoned voters to rise up against the Washington “game,” which allows this mighty enemy to triumph over the Little Guy and imperil the Earth.

“[I]t’s a game that ordinary Americans are losing,” he said. “It's a game where lobbyists write check after check and Exxon turns record profits, while you pay the price at the pump, and our planet is put at risk.”

Exxon is political gold, because it hits on several of voters’ key issues – the economy, energy, gas prices, even global warming. According to many politicians, Exxon and other oil companies are to blame for problems in all those areas – and thus, they must pay.

Hillary Clinton said earlier that she wanted to “take” oil companies’ profits. In a Valentine to her friends at Income Redistribution ’R’ Us, her February 14 press release declared: “In 2007, many of the largest oil companies recorded record profits. Exxon earned $40.6 billion, the highest profit for any U.S. company in history. Hillary believes it is time for oil companies to do their share in funding clean energy technologies.”

Labeling something someone’s “share” makes it sound only fair. And listen – the next line is that “She would give oil companies a choice.” What fairness! Except the choice is how to be taxed: “invest more in renewable energy technology or pay into a Strategic Energy Fund.”

Option No. 2 would fund “ethanol and other homegrown biofuels,” among other things – both strategies that have been debunked as viable, greenhouse-gas-reducing energy aids.

But when it’s not your money you’re throwing carelessly at something, who cares? It’s Big Oil’s money. Just ask NBC’s Brian Williams, who apparently wanted to see some pitchforks after Exxon announced its 2007 earnings.

“[J]ust common sense here, but I’m thinking $40 billion – that’s profit, that’s not what they made over the course of a year – might have something to do with what we’re paying per gallon,” Williams said on the February 1 “Nightly News.” “Why shouldn’t people be outraged to hear that?”

The major media have long fostered class warfare between the Big Companies and the Little Guys who are supposedly oppressed by the fact that we have profitable businesses in the United States.

Now the two Democratic contenders for president are running on that same warfare platform. Unfortunately, there’s a problem with their logic: you can’t help employees by burying employers.

The New York Times admitted this deep in a February 19 story about the candidates’ “populist appeals.”

“Ever since Mr. Clinton’s election as president in 1992, the Democratic Party has been divided over how to balance economic policy between initiatives intended to promote economic growth and those intended to help workers.”

That’s right – the anti-business brand of so-called “help” for workers is in opposition to economic growth. And it’s economic growth that builds new businesses and new jobs.

Take Exxon. It employs more than 82,000 people worldwide, with the biggest percentage of its workers in the United States. That includes administrative assistants, engineers, electricians, mechanics, janitors, accountants and IT staff – many of the same jobs offered at other companies. That’s important to note, because Exxon wouldn’t be the only company a “progressive” president would go after. Candidates have hinted at other targets, such as credit card companies, insurance companies, and pharmaceutical manufacturers.

Punishing a business ultimately punishes the people who rely on it. Multiply that punishment by many businesses, and you’re talking about the backbone of America.

In addition to those 82,000 employees, Exxon also has millions of others who rely on it for some income.

According to the February 2 New York Times, “Exxon also spent $35.6 billion for share buybacks and dividends last year, $3 billion more than in 2006.” This was the only passing acknowledgment of shareholders in that 1,102-word article about the company’s record 2007 profit.

Those employees and shareholders are the working men and women of America – the ones Clinton and Obama purport to help. As with many economic proposals, the media are failing to count the cost.