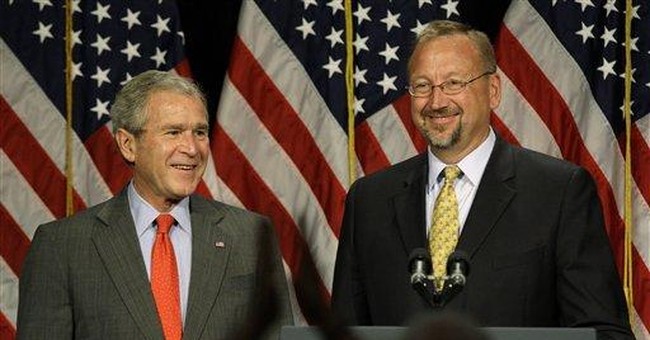 Two of the top candidates to become Chair of the Republican National Committee offered competing blueprints to explain their plans to lead the GOP Tuesday.

Michigan Republican Party Chairman Saul Anuzis mailed all members of the Republican National Committee his 24-page vision and posted the PDF version online at www.anuzisforchair.com In it, Anuzis puts a heavy emphasis on technology and attention-grabbing efforts to grow the GOP, such as a nationwide listening tour with party members, a “60 under 40” program to train young leaders and a “dollar a day” fundraising effort targeted to low-dollar donors.

Steele released the second installation or “chapter” of his “Blueprint for Tomorrow” the same day. The 3-page mailer, also available online at www.steeleforchairman.com, called “A New Era of Ethics” outlines a plan to create an Ethical Review Committee within the RNC to “review and approve our ethical code and RNC operations and contract processes.”

The piece specifically mentioned the demise of Republican Rep. Duke Cunningham (Calif.), who disgraced the party after he pled guilty to taking more than $2 million in bribe money.

Some of the suggested ethical guidelines Steele supports are rules like “No Republican incumbent will receive Party resources who has been convicted of felony charges” although most of the criminal Republicans like Cunningham and Rep. Rick Renzi (R.-Ariz.) resigned from Congress before they could be convicted for their ethical lapses.

The first installation of Steele’s blueprint focused on how he believed the GOP should move forward, without using words, as he said, like “renewal, rebuild, recharge and re-this and re-that.” Instead, “We must win back our credibility with a new purpose and vision for the future of our nation…a message based on the time-honored principles we Republican stand for…faith, freedom, personal responsibility, respect for life—born and unborn—and a commitment to economic growth.”