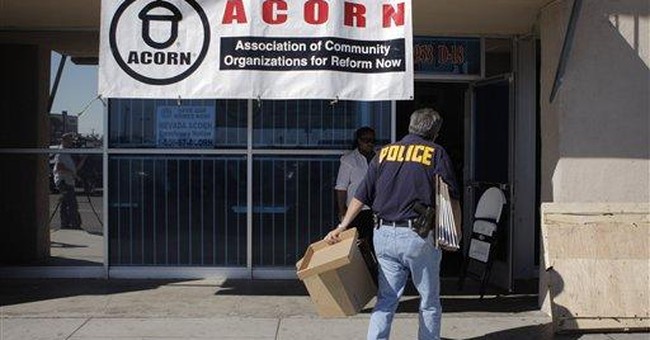 One African-American ACORN official even suggested fraudulent registrations were a small price to pay for voting privileges that were paid for “in blood.”

“Thorough studies of voter fraud in the United States have been done and the universal conclusion of the studies that have been done by us and other people is that the actual incidence of the voters voting under a false name and attempting to register multiple times and to defraud the system is minimal purging on nonexistent,” said former Connecticut Secretary of State Miles Rapaport on ACORN’s behalf at a press conference in Washington.

Standing alongside ACORN officials Rapaport said the “actual instances of them [voter fraud] is so small" and it would be wrong "to use it as an excuse to try to discourage people from registering, to set up barriers with a draconian a voter identification provisions.”

“We’ve been incarcerated by a very unfortunate season of mudslinging,” said Maryland ACORN president Rev. Gloria Swierenga. “There can be errors in the process, we readily admit that, but we are fiercely patriotic and it’s in no one’s best interest.” She said others have “died so I can vote, so this is no small matter and when we explain to people how you can help build an America that is truly one nation, indivisible with liberty and justice for all, I think most people take that seriously. I think that the Palin campaign speaks for itself.”

ACORN endorsed Obama for president earlier this year and Obama was the first ever national candidate to contract ACORN workers for get-out-the-vote activities.

Obama has not responded to McCain’s calls to work together against voter fraud.