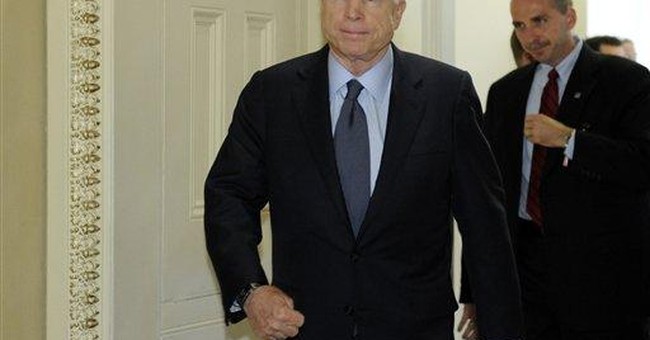 GOP presidential candidate John McCain announced he will be attending the first presidential debate this evening in Oxford, Mississippi after indicating he may postpone it in order to stay in Washington to work on the $700 billion financial bailout.

As McCain boards the plane for Mississippi, there still has not been an agreement reached between Republicans and Democrats on what the final package should be, although Democrats could unilaterally pass it with their majorities in the Senate and the House.

At McCain’s urging, President Bush called a high-level meeting at the White House to discuss the package Thursday. McCain temporarily suspended his campaign to attend the meeting and try to gain consensus among Republicans and Democrats on how to proceed. In particular, McCain wanted to help House Republicans, who are demanding more taxpayer protections, gain a seat at the negotiating table.

The meeting did not go well.

“Much of yesterday was spent fighting over who would get the credit for a deal and who would get the blame for failure,” the McCain campaign said in a statement Friday. “There was no deal or offer yesterday that had a majority of support in Congress. There was no deal yesterday that included adequate protections for the taxpayers. It is not enough to cut deals behind closed doors and then try to force it on the rest of Congress -- especially when it amounts to thousands of dollars for every American family.”

The campaign said McCain “is optimistic that there has been significant progress toward a bipartisan agreement now that there is a framework for all parties to be represented in negotiations, including Representative Blunt as a designated negotiator for House Republicans.”

McCain will return to Washington after the debate and will continue to play a role in crafting the legislation.